The O Antiphons in Middle English: 'To þe we clepe with alle owre hert and brethe' 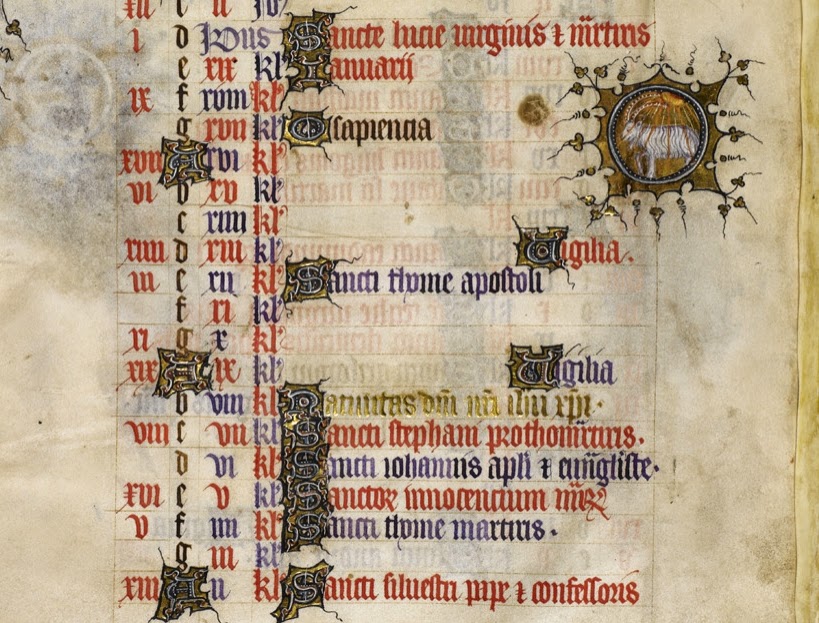 14th-century calendar for December, with 'O Sapientia' on the 16th (BL Egerton 3277, f. 6v)
In medieval England, 16th December was the first day of the O Antiphons. (In other parts of the church they began on 17th December, but they lasted eight days, rather than seven, in English tradition.) Every day between now and Christmas Eve, at Vespers, in the early dusk of a midwinter evening, the antiphon would be one of these ancient songs of longing and desire, which address Christ by a series of allusive titles drawn from scriptural tradition and appeal to him: Come. So memorable was the beginning of these antiphons that it was marked on 16th December in calendars like the one above, almost as if it were a saint's day - not an honour often accorded to liturgical antiphons. Turn to the calendar for December in the Book of Common Prayer, and you'll find it there too.

These Advent texts are now most familiar from J. M. Neale's hymn 'O Come, O Come Emmanuel', but he was not the first, by a long way, to turn the antiphons into vernacular poetry. They have inspired poets since the very earliest days of literature in English; last year I posted about the exquisite Old English versions of the antiphons, which may be from the ninth or tenth century, and I've also previously posted some fifteenth-century English carols based on 'O Clavis David' and 'O Radix Jesse'. Today I want to look at two more Middle English interpretations of these antiphons. The first comprises only a four-line version of today's text, 'O Sapientia':

Thou wisdom, who crept out of God's mouth,
Who reaches from east to west, from north to south,
Who all things made through thy might
Come to teach us the way of flight.

The antiphon is O Sapientia, quae ex ore Altissimi prodiisti, attingens a fine usque ad finem, fortiter suaviterque disponens omnia: veni ad docendum nos viam prudentiae ('O Wisdom, proceeding from the mouth of the Most High, reaching from one end to the other, mightily and sweetly ordering all things: come and teach us the way of prudence'). Hear it sung here. The English verse survives in a fourteenth-century manuscript of sermons (Worcester, Worcester Cathedral Library F. 126), and is recorded in Siegfried Wenzel, 'Unrecorded Middle-English Verses', Anglia 92 (1974), 55-78 (72). (It's the only one of the O Antiphons to be translated there, but the same manuscript also contains a short English version of the Advent collect which begins 'Stir up, O Lord...', rendered 'Egg our hearts, Lord of might...'!).

It might seem odd to describe Wisdom 'creeping' out of the mouth of God (translating the Latin prodisti), but the word appears a few times in Middle English literature in reference to Christ's entry into the world; I'm reminded of the description of the Incarnation in 'In a church where I did kneel':

All the world in woe was wound
Until he crept into our kin, -
A lovely girl he lit within,
The worthiest that ever was.

The word suggests quiet, steady movement, perhaps - something gentle, like a breath. I can only assume that in the last line 'the way of flight' means something like 'the means of departing from this world', though it doesn't seem like an accurate translation of viam prudentiae. But isn't 'from east to west, from north to south' a beautiful way of rendering a fine usque ad finem, 'from one end to another'? 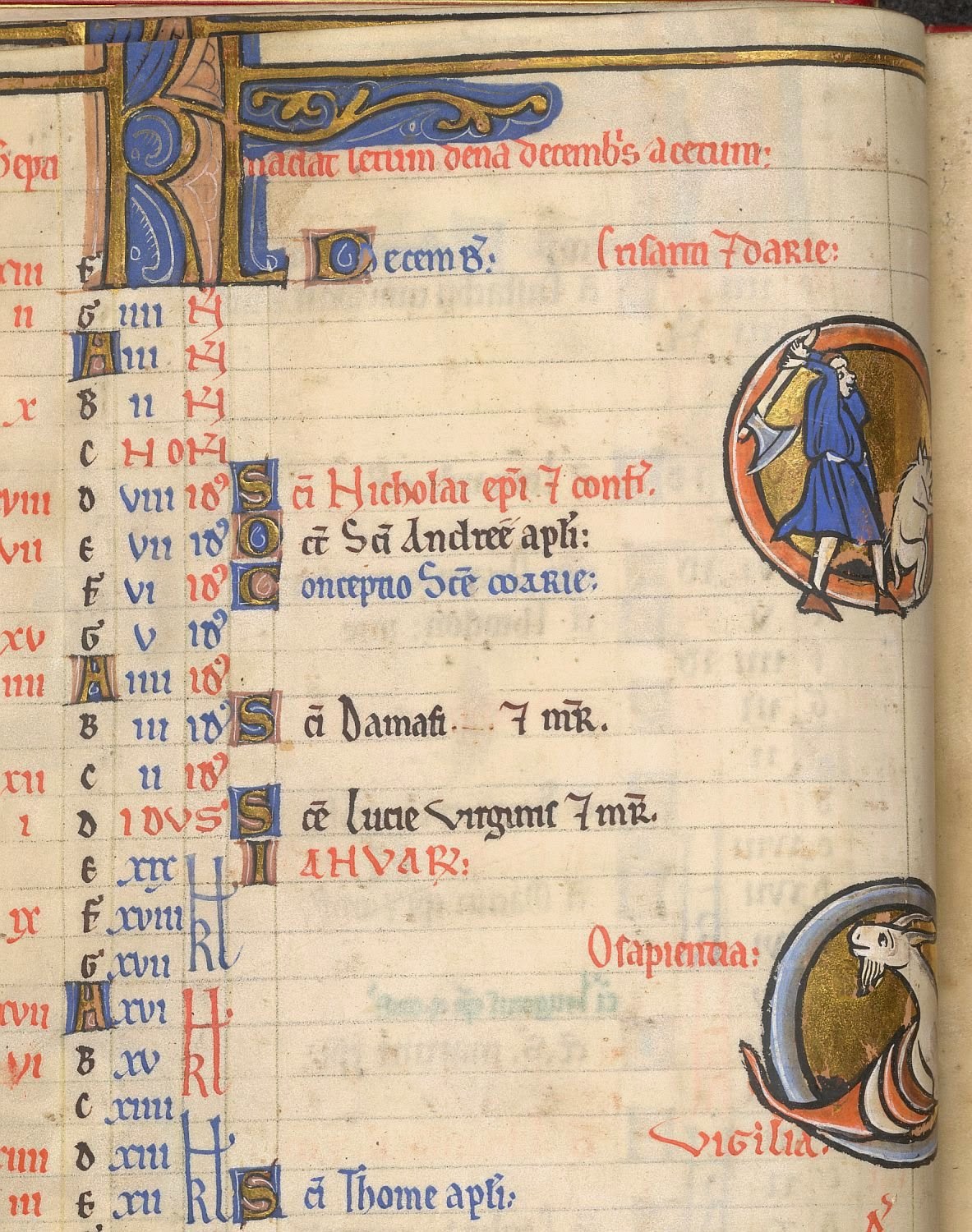 'O Sapientia' and Capricorn, 13th century (BL Lansdowne 420, f. 6v)
Apart from this little verse, there is a surviving English poetic translation of all eight of the antiphons. It's preserved in BL Harley 45, added in a hand of the late fifteenth century to a slighter earlier manuscript of religious texts. At the time this version of the O Antiphons was added to the manuscript, it seems to have belonged to a woman named Margaret Brent, who was possibly a laywoman from Salisbury. The poem consists of a verse for each antiphon, with the Latin text followed by an English translation and expansion. I won't claim it's great poetry, but several of the verses are lovely; 'O Oriens' and 'O virgo virginem' are my favourites. And it's a testament to the power and popularity of these antiphons, the richness of their imagery and the breadth of their appeal; if you were inclined to think of the antiphons as a solely monastic or clerical interest, the example of the devout laywoman Margaret Brent would suggest otherwise.

Here's the text as it appears in Carleton Brown, Religious Lyrics of the XVth Century (Oxford, 1952), pp. 90-2, and a modernised version follows. 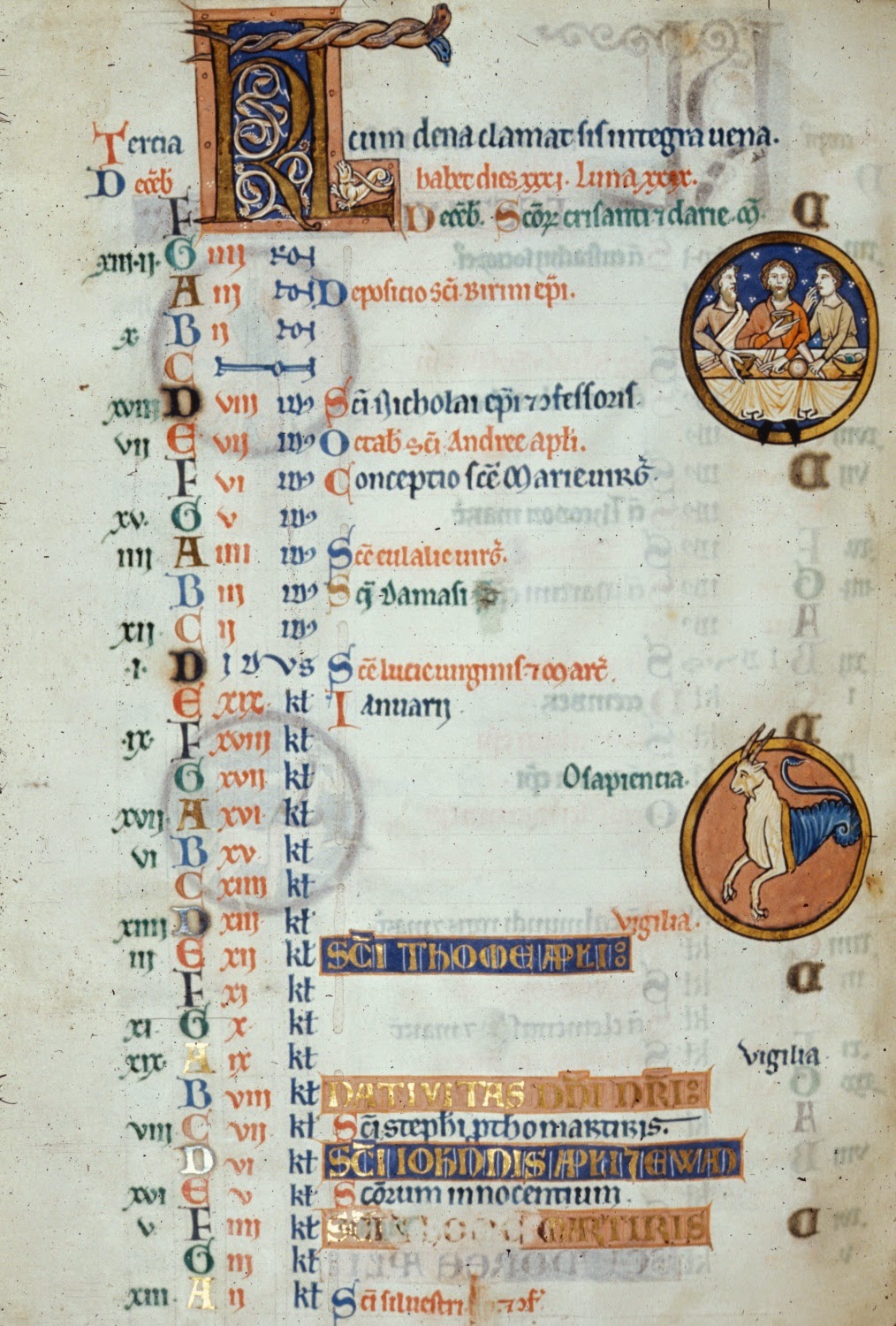 O Sapientia of the Father, surmounting all thing,
Proceeding from his mouth his behests to fulfill,
Alpha and O, both end and beginning,
From end to end dost attain and till, [extend and reach]
Disposing each work sweetly at his will,
We thee beseech, Lord, with humble reverence,
Come thou and teach us the ways of prudence.

O Adonai, chief duke of Israel,
Who them didst lead from thrall captivity,
Appearing to Moses, madest him of counsel [made him wise]
In the Mount of Sinai, there showing thy majesty,
Revealed to him thy law in a bush of fiery flame,
We lowly beseech thee, Lord omnipotent,
Come and redeem with thy power's greatest extent.

O Radix Jesse, most sovereign and excellent,
Standing as a holy sign to every nation,
Before whom all kings their mouths shall stent, [close]
Being right mute and still as any stone,
Shall kneel in thy presence and make deprecacione, [pray]
Them to deliver and us all in a throwe, [very soon]
Swiftly, blessed Lord, be not therein slow.

O Clavis David, of whom Isaiah told,
Called sceptre and key, to every lock well fit
Of Israel – I mean of Jacob’s household –
Thou openest locks which no creature can shut,
And closest again what cannot be unshut;
Loose us, thy prisoners, bound in wretchedness
Of sin, shadowed with mortal darkness.

O Oriens, splendour of everlasting light,
Whose beams transcend the common clearness
Of sun or moon, for we of very right
Thee call the bright sun of truth, righteousness,
With justice and mercy each wrong to redress,
To thee we call with all our heart and breath,
To light us who sit in the darkness of death.

O Rex Gentium, whom all people desire
To honour and love with hearty affection,
The corner-stone that skilfully brought nigher [i.e. nearer]
The two testaments, making them one,
Old and new madest lawfully union,
Save, Lord, mankind, thy most noble creature,
Made of vile earth to resemble thy fair figure.

O Emmanuel, our sovereign lord and king,
In whom we Christian men trust above all,
Give to thy subjects grace, with good lykyng [desire, delight]
Well to perform thy precepts legal,
And save us, thy servants, from mischief all.
Thus we pray, our gracious Saviour,
Our Lord, our God, our loving Redeemer.

O Virgo Virginum, all peerless in virtue,
Women of Jerusalem muse on this matter:
How thou, a maiden, art the mother of Jesu.
Nonetheless, if any of them this secretly enquire,
Sweet lady, then shortly make to them this answer:
'The high might of God this mystery first began.
Ye damsels of Jerusalem, why wonder ye so then?' 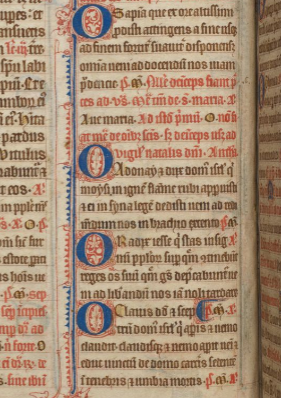 Notice that the old kalendars referred to the 8th December as the Conception and not the "immaculate" conception.

Thank you so much for this! I have loved the O Antiphons since meeting the Exeter Book verse-work with them, and learning of Tolkien's inspiration from there, and then getting acquainted with Arvo Pärt's settings of a German translation and Charpentier's of the Latin - but I had never heard of a full Middle English translation!

I have not had any success with the Middle English Dictionary, but might 'flyth' represent a sense of 'flit' analogous to that of German 'Fleiss' and Dutch 'vlijt'? (Jan de Vries relates Old English 'flit' to Old Saxon 'flit', Old Frisian 'flit', and Old High German 'fliz' [all with long 'i'].) Could there even be a Dutch influence on such a 'flyth' at that period? (I think of N.F. Blake's discussion of "Dutch Loan Words" in his edition of Caxton's Reynard (EETS 263): (p. xxi) "throughout the later Middle Ages there was a rising volume of commerce between England and Holland which led to the introduction of many Dutch loan-words into English.")

That's a very interesting suggestion! It seems possible, though if the word ever had that sense in English it appears to be unknown to the MED and OED...

Thank you for this and your other posts on the Os.

The line of flight, of a bird or an arrow, may be conceived as the quickest and most direct way from the origin to the proper and intended end: perhaps the old English translator chose 'way of flight' as a figure for the via prudentiae, which virtue, after all, is queen and guides us straight to our own end, since Wisdom so often eludes us. Egg our hearts, indeed, good Lord!