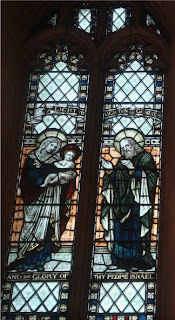 If I was going to start writing hymns (by which I mean, if I had any hope I'd be good at writing hymns) my first attempt would be a hymn for Candlemas, because there are so few good ones. Perhaps the only really well-known one is 'Hail to the Lord who comes', which is fine, but that's just one - and then you're just stuck trying to find less specific things on the theme of light. We sang a dreadful hymn at Christ Church Cathedral the other day which had better remain nameless, and 'Shine Jesus Shine' is an oft-suggested option (though I've never had to sing it at Candlemas, thank goodness).

If I've overlooked any good options I would love to be corrected, but it seems there's a bit of a dearth in this area. So in the absence of having written my own Candlemas hymn, I present for your approval this hymn from the Oxford Book of Carols as a potential Candlemas carol. It's called 'Infinite Light' and while it doesn't mention any of what you might consider necessary elements for a hymn about the Presentation in the Temple, it does at least illustrate Simeon's words: 'Mine eyes have seen thy salvation, which thou hast prepared before the face of all peoples: to be a light to lighten the Gentiles, and to be the glory of thy people Israel'.

In the Oxford Book of Carols it's set to a complicated tune from the 'Virgin Unspotted' family of traditional carol tunes, but it could be sung to the better-known and much simpler version of the tune (page 1 and page 2 - known to me as 'A virgin most pure' and regularly sung at carol services to those words). If you want to hear the more demanding tune you can download an mp3 of it from this page.

I should point out, considering what I usually post about, that lots and lots of medieval carols mention Candlemas as the end-point of the Christian season (this site cites some of them) - but none of the kind you could sing in church. There is this exquisite medieval Candlemas carol, but I don't know if it's ever been set to music. Oh, and there is also this, of course...


The greatness of God in his love has been shown,
The light of his life on the nations is thrown:
And that which the Jews and the Greeks did divine
Is come in the fullness of Jesus to shine.

He rolls the grim darkness and sorrow away,
And brings all our fears to the light of the day:
The idols are fallen of anger and blood,
And God is revealed as the loving and good.

And, though we have sinned like the Prodigal Son,
His love to our succour and welcome will run.
His gospel of pardon, of love and accord,
Will master oppression and shatter the sword: