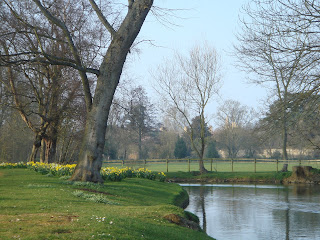 George Herbert died on 1 March, 1633, but in some places he is commemorated today, 27 February. 'The Flower' is my favourite poem of his, and it's the perfect poem for this season when the spring flowers are coming tentatively to life.

There are some lovely things in this poem: I'll talk about gliding below but the other one I want to point out is the irresistible idea that the flowers in winter go to visit their 'mother-root', where they 'keep house unknown' - very much like John Donne's tree-sap which in winter 'doth seek the root below', but a more homely, cheerful kind of image.

How fresh, O Lord, how sweet and clean
Are thy returns! ev’n as the flowers in spring;
To which, besides their own demean,
The late-past frosts tributes of pleasure bring.
Grief melts away
Like snow in May,
As if there were no such cold thing.

Who would have thought my shrivel’d heart
Could have recover’d greennesse? It was gone
Quite under ground; as flowers depart
To see their mother-root, when they have blown;
Where they together
All the hard weather,
Dead to the world, keep house unknown. 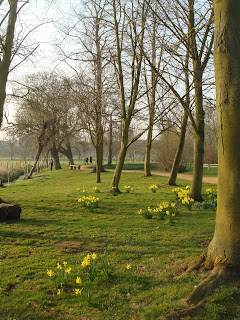 These are thy wonders, Lord of power,
Killing and quickning, bringing down to hell
And up to heaven in an houre;
Making a chiming of a passing-bell,
We say amisse,
This or that is:
Thy word is all, if we could spell.

O that I once past changing were;
Fast in thy Paradise, where no flower can wither!
Many a spring I shoot up fair,
Offring at heav’n, growing and groaning thither:
Nor doth my flower
Want a spring-showre,
My sinnes and I joining together; 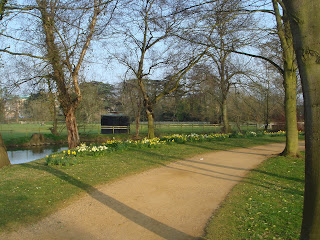 But while I grow to a straight line;
Still upwards bent, as if heav’n were mine own,
Thy anger comes, and I decline:
What frost to that? what pole is not the zone,
Where all things burn,
When thou dost turn,
And the least frown of thine is shown?

And now in age I bud again,
After so many deaths I live and write;
I once more smell the dew and rain,
And relish versing: O my onely light,
It cannot be
That I am he
On whom thy tempests fell all night.

These are thy wonders, Lord of love,
To make us see we are but flowers that glide:
Which when we once can finde and prove,
Thou hast a garden for us, where to bide.
Who would be more,
Swelling through store,
Forfeit their Paradise by their pride. 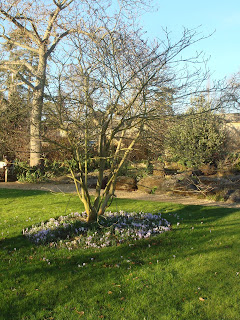 'We are but flowers that glide.' glide is one of those impossibly beautiful words where just reading the dictionary list of citations is like reading a piece of found poetry. To take just one or two medieval examples: in the Old English Andreas, a ship moves through the water 'as a bird glides through the heavens'; in Beowulf the sun 'glides' above the earth; a Middle English homily compares the penitent sinners' tears to 'burning embers that glide down their faces'; Havelok's blood pours from his wounds 'like water that glides from the well'...

In Old and Middle English and as late as Herbert's day, glide is associated with any kind of smooth movement - flying through the air, sailing, skating; the progress of the sun and moon across the sky, or of the sun's beams towards the earth; the swift movement of a weapon, running water, the glance of an eye, and things which slip or which, like time and life, just slip away. In a more abstract context, as the Middle English Dictionary shows, it could even be used of the relationship between the Holy Ghost and the other members of the Trinity - where we say the Spirit 'proceeds from the Father and the Son', several ME sources have 'the Ghost which glides from them both', appropriate perhaps because a gliding movement is imperceptible, impossible to track. Ghosts in the literal sense are of course especially associated with gliding: in medieval poetry I can't help thinking of Langland's triumphant assertion that no 'grisly ghost' may glide where the protecting shadow of the cross falls; and there is an unforgettable passage in the romance Sir Amadace where a knight's mysterious ghostly benefactor 'glode away as dew in the sun'.

In Herbert's line the sense of glide is 'pass away', with perhaps the kind of imperceptible 'melting' into death envisaged by John Donne:

As virtuous men pass mildly away,
And whisper to their souls to go,
Whilst some of their sad friends do say,
"Now his breath goes," and some say, "No."

I wouldn't exactly associate flowers with this kind of gliding away - I would have thought they wither too quickly - but it comes up several times in the Bible, of which Herbert was surely thinking here: man "cometh forth like a flower, and is cut down: he fleeth also as a shadow, and continueth not' (Job 14:2); "the days of man are but as grass: for he flourisheth as a flower of the field. For as soon as the wind goeth over it, it is gone: and the place thereof shall know it no more" (Psalm 103: 15-16); "all flesh is grass, and all the goodliness thereof is as the flower of the field; the grass withereth, the flower fadeth, because the spirit of the Lord bloweth upon it" (Isaiah 40:6-7). Strangely enough, or perhaps not so strangely, there's swift and smooth movement in all these passages. The fleeing shadow, the wind moving over the flower, the spirit of the Lord blowing upon it; any of those verbs might have called gliding to Herbert's mind. Shadows and spirits glide, as we saw above; and death, too, could glide, as in this fourteenth-century poem, another one full of fading flowers:

Ne is no quene so stark ne stour,
Ne no leuedy so bryht in bour
That ded ne shal by glyde. 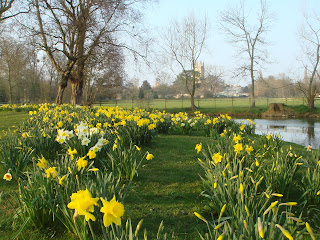