St Anselm and the Hare 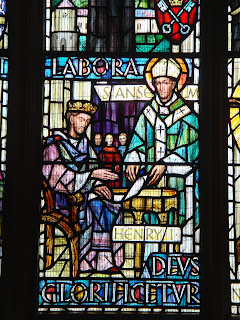 Eadmer's Life of St Anselm is an inexhaustible fund of stories about the great archbishop - some simply funny, some of great historical interest, many thoroughly admirable. Because it was written by a man who knew Anselm well, spent a great deal of time with him, and loved him very much, it is distinctive among medieval saints' lives in giving the sense of a real human being, living his daily life, interacting with other people, and trying to do right. Eadmer was a monk of Christ Church, Canterbury from his boyhood, and an interesting figure himself for a number of reasons (I've been intending for a while to post about his reminiscences of pre-Conquest Canterbury) - but if I get distracted talking about him I'll never get back to Anselm. So let me just say instead that this story of the hare, touching in its own right, is made irresistible by the fact that (though the form of the story may have been embellished a little) it seems quite possible that this really happened - that Eadmer was really there with Anselm, that day on the road to Hayes, some time in the summer of 1097:

Anselm left the court and, while he was hastening to his manor at Hayes, the boys of his household with their dogs chased a hare which they came upon in the road. As they were pursuing it, it fled between the feet of the horse on which Anselm sat. The horse stood still; and Anselm - knowing that the wretched animal looked to find a place of refuge beneath him, and not wishing to deny it the help it needed - drew his horse by the reins and kept it still. The dogs came round, snuffling about on all sides and restrained against their will, but they could neither make it move from under the horse, nor harm it in any way.

We were astonished at the sight. But Anselm, when he saw some of the horsemen laugh and make merry at the expense of the cornerned animal, burst into tears and said: "You laugh, do you? But there is no laughing, no merry-making, for this unhappy beast. His enemies stand round about him, and in fear of his life he flees to us asking for help. So it is with the soul of man: when it leaves the body, its enemies - the evil spirits which have haunted it along all the crooked ways of vice while it was in the body - stand round without mercy, ready to seize it and hurry it off to everlasting death. Then indeed it looks round everywhere in great alarm, and with inexpressible desire longs for some helping and protecting hand to be held out to it, which might defend it. But the demons on the other hand laugh and rejoice exceedingly if they find that the soul is bereft of every support."

When he had said this, he slackened his rein and set off again along the road, raising his voice and forbidding the dogs to chase the animal any more. Then the hare leapt up unhurt, and swiftly returned to its fields and woods; while we, no longer laughing and not a little uplifted by so affecting a deliverance for the frightened animal, followed the Father along our appointed way.


Anselm's sympathetic comparison of the hare to the poor hunted sinner is a fairly common idea in medieval literature and art. There's an interesting 15th-century poem, sometimes called 'The Mourning of the Hunted Hare', in which a hare laments its miserable life, constantly hunted and driven from place to place (read it and a translation here). That's why the illustrations in the Maccesfield Psalter, as one of many playful inversions of the natural order, include a hare which is boldly riding out to hunt: 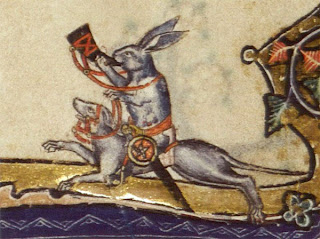 Hares often appear in the edges of manuscripts, in stone carvings and on misericords; there are some beautiful manuscript depictions of medieval hares here. They are wonderful creatures; no wonder Anselm was moved to compassion!
Posted by Clerk of Oxford at 12:41 pm