The Story of St Scholastica in Old English 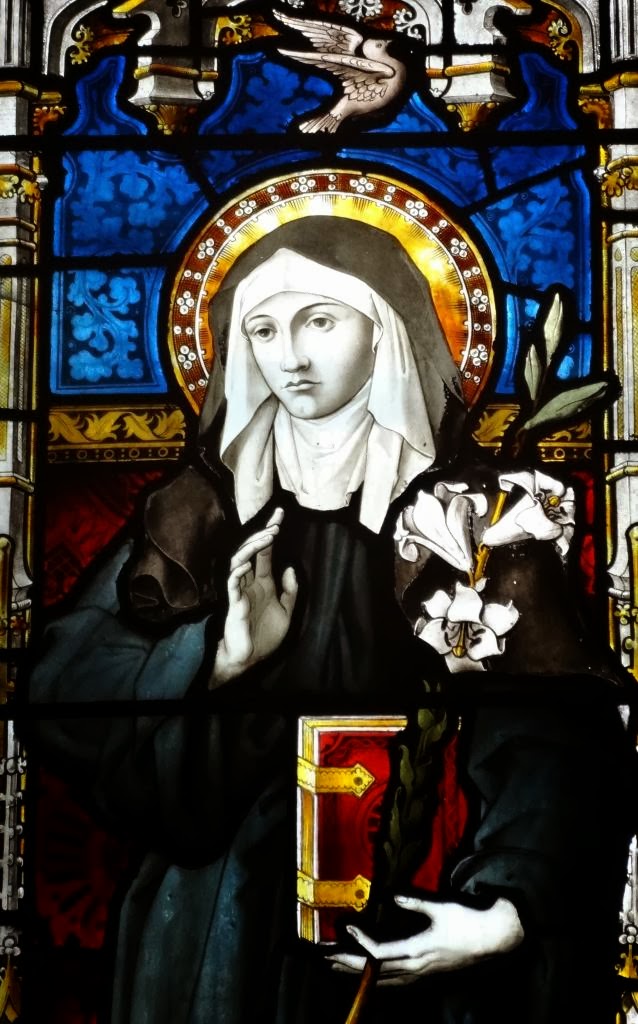 St Scholastica, from a window in St Thomas', Oxford
St Scholastica, sister of St Benedict, was commemorated in medieval England (as elsewhere) on 10 February, from the Anglo-Saxon period onwards. Everything that is known about her comes from her appearance in Gregory's Dialogues, but this in itself was enough to ensure high regard in Anglo-Saxon England - the Dialogues was, after all, one of the texts Alfred the Great considered 'necessary for all men to know'. As the first and greatest example of a consecrated Benedictine woman she provided a female pattern for Benedictine monasticism, which gave Anglo-Saxon England such remarkable women as Hilda of Whitby and Etheldreda of Ely, among many others. There were also some pairs of holy brothers and sisters who followed the model of Scholastica and Benedict's close sibling relationship, most notably St Guthlac and his sister Pega, but perhaps St Æthelburh of Barking and her brother Earconwald too.

This is how Ælfric tells Gregory's famous story about her, in his homily on St Benedict:

This would make a good exercise for translating Old English, and the dialogue especially is not hard to recognise: "Ic bidde ðe, broðer min, ne forlæt ðu me on þissere nihte", and "Arie ðe se Ælmihtiga God, sweoster: hwæt hæfst þu gedon?" (once you know that 'arie' means 'have mercy'!). Here's my translation of Ælfric, who is himself closely translating St Gregory:


The holy man had a pious sister named Scholastica, who from childhood was consecrated to God, serving Him in virginity and living near his monastery. The holy man always visited her once in the course of the year. One day he came to her cell, according to his custom, with some of his fellow monks, and they spent the whole day in the praise of God and in holy discourse. Then in the evening, when they were sitting at their meal, the holy maiden said to her venerable brother, "I ask you, my brother, not to leave me tonight, so that we may talk together about the joys of the heavenly life until morning." The venerable man answered, "What are you saying, sister? I cannot for any reason be away from the monastery at night." And at that moment there was such calm weather that not a cloud could be seen in the sky; but then the nun, when she heard his refusal, covered her face with her hands and bowed her head to the table, praying to the Almighty Lord. Then, when she raised her head from the table, there burst forth such great thunder and lightening, and such a surging storm fell, that the holy man and his brothers could not stir their feet from the cell because of the immense downpour. Then the holy man said to his sister, "Almighty God have mercy on you, sister! What have you done?" She answered, "Well, I asked you, and you would not grant my request; so I asked my Lord, and he heard me. Go to the monastery now, if you can, and leave me here alone." But he could not go out from under that shelter, and stayed there that night – unwillingly, since he would not stay willingly. And they spent all that night, thoroughly awake, in holy discourse about the spiritual life.

Three days later, the holy man was standing at his prayers, and he looked out, and saw the soul of that same nun his sister being led to heaven in the form of a dove. Rejoicing in her glory, he thanked Almighty God, and told his brothers of her death. He straightaway sent them to bring her body to the monastery and bury her in his own tomb, where he intended to lie himself, with great honour; so that their bodies might rest in one grave, just as their minds, with one thought, had always served God. 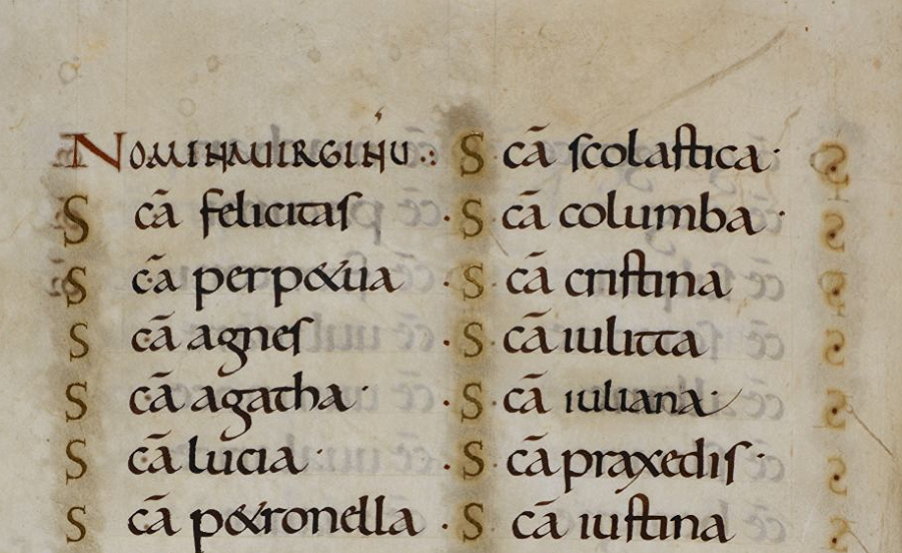 Scholastica's name in an Anglo-Saxon litany (the Ramsey Psalter, BL Harley 2904, f. 211v)
This is how the same story is told in a Middle English Life of Scholastica, which dates to the late thirteenth century (from this site, which also contains a useful overview of Scholastica's legend):

Sori were this holi thinges bothe tho it was eve;
Seyn Benet to his soster sede that he ne mighte noleng bileve.
Sori was this maide tho; "Brother," heo sede, "thin ore!
This holi wordes so murie beth, yut we mote telle more.
Wen we in Godes service beth, ne dorre we our ordres breke.
Icham so feble that I ne wene never eft with thee speke;
Bileve we togadere this one nyght, vor Him that ous dere aboghte.
Ichot He wole it ous vorgive, vor we doth it in gode thoghte."
"Be stille," quath Seyn Benet, "loke wat thou dost telle;
Wel thou wost that I ne may bi nyghte be fram my celle."
Tho this maide isei that it ne huld to bidde hire brother more,
Hire heved heo gan to honge adoun and wep swithe sore.
"Lord," heo sede, "Thou art fol of milce and of ore;
Let me, yif Thi wille beo, hure more of Thi lore.
Ne let noght my brother tonyght, Lord, fram me wende,
Ac let ous with tales of Thi blisse this night bringe to ende."
As this maide lokede up, tho heo hadde ido hire bone,
That weder that was so cler and vair bigan to chaungi sone.
Hit gan to snywe and thondri, lighte, and eke reyne,
That ver withynne nyght it was ar that weder wolde fyne,
That wel was ech quic best that was in eny inne.
Nou was this a maister maide that such weder couthe awynne!

Tho ne mighte Seyn Benet for weder thenne wende.
"Soster," he sede, "wat hastou do? Thou fondest me to scende!
Yif it my Loverdes wille nere wel ne dudestou noght;
That ich schal myn ordre breke so nadde ich never ithoght."
"Leve brother," the maide sede, "ich bad thee swithe yerne
To bileve her thus nyght, and ever thou dust werne.
Ich bad mi Lord another bone and He me herde anon.
Ches wether thou wolt bileve, other henne gon.
Bilef me al one yif thou wolt, vor no thonk ne can ich thee;
Ich thonke God of Hevene that so sone hurde me."
Tho hi ne mighte departi noght al nyght togadere hi woke,
And tolde of the swetnesse that was myd God in tale and eke in boke.
The nyght hem thoghte swithe scort, and sori aten ende
Hi were, tho hi seie dai, that hi moste ato wende.

[Sorry were both these holy ones when the evening came; St Benedict said to his sister that he could stay no longer.  Sorry was this maiden then. "Brother," she said, "your pity!  These holy words are so pleasant that we may yet say more. Since we are in God's service, we do not dare break our vows, but I am so weak that I do not expect to speak with you again; let us stay together this one night, for the sake of him who so dearly redeemed us. I know he will forgive us for it, for we do it with good intentions." "Be quiet," said St Benedict, "and consider what you are saying; you know very well that I cannot be away from my cell at night." When this maiden saw that it would do no good to ask her brother any longer, she began to hang down her head and wept sorely.  "Lord," she said, "you are full of mercy and of pity; allow me, if it be your will, to hear more of your teaching. Do not allow my brother, Lord, to go from me tonight, but let us spend this whole night in talking of your bliss." As this maiden looked up, when she had made her prayer, the weather that was so clear and fair suddenly began to change. It began to snow and thunder, with lightning and rain too; the night would be far advanced before it began to clear, and it was well for any living creature which could find shelter. Now this was a master-maid who could control such weather!  Then St Benedict could not go from there because of the weather. "Sister," he said, "what have you done?  You are trying to destroy me! If it were not my Lord's will, you would be able to do nothing; I never would have thought I should break my vow in this way."  "Dear brother," said the maiden, "I asked you very earnestly to stay here this night, but you repeatedly refused.  I asked my Lord for another favour, and he heard me. Choose whether you will stay, or go from here. Leave me all alone if you want, for I owe you no thanks; I thank God of Heaven who so swiftly heard me!"  Since he could not depart, they stayed awake together all night, and talked of the sweetness that was with God in tales and books too.  The night seemed very short to them, and they were sorry at the end, when they saw the dawn, that they had to part from each other.] 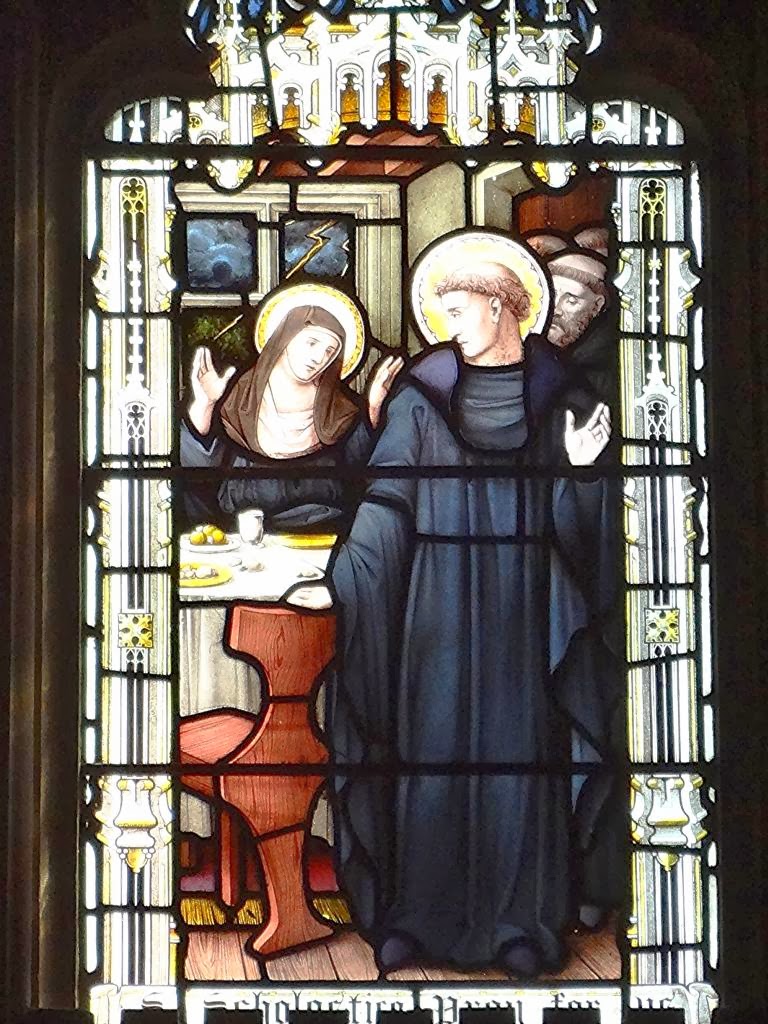 Benedict and Scholastica, with the storm gathering (St Edmund's, Bungay)
Posted by Clerk of Oxford at 9:37 pm