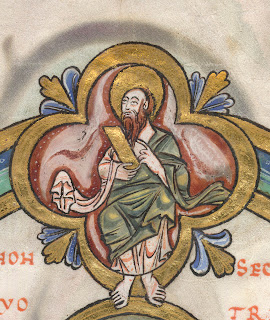 St Paul in an Anglo-Saxon manuscript, British Library, Harley 76
This is an extract from the end of a prayer to St Paul by St Anselm, which he composed probably c.1070. After lamenting his own distance from God, Anselm appeals to the motherly love of Christ and Paul to comfort and console him.

O St Paul, where is he that was called
the nurse of the faithful, caressing his sons?
Who is that affectionate mother who declares everywhere
that she is in labour for her sons?
Sweet nurse, sweet mother,
who are the sons you are in labour with, and nurse,
but those whom by teaching the faith of Christ
you bear and instruct?
Or who is a Christian after your teaching
who is not born into the faith and established in it by you?
And if in that blessed faith we are born
and nursed by other apostles also,
it is most of all by you,
for you have laboured and done more than them all in this;
so if they are our mothers, you are our greatest mother...

And you, Jesus, are you not also a mother?
Are you not the mother who, like a hen,
gathers her chickens under her wings?
Truly, Lord, you are a mother;
for both they who are in labour
and they who are brought forth
are accepted by you.
You have died more than they, that they may labour to bear.
It is by your death that they have been born,
for if you had not been in labour,
you could not have borne death;
and if you had not died, you would not have brought forth.
For, longing to bear sons into life,
you tasted of death,
and by dying you begot them.
You did this in your own self,
your servants, by your commands and help.
You as the author, they as the ministers.
So you, Lord God, are the great mother.

And you, my soul, dead in yourself,
run under the wings of Jesus your mother
and lament your griefs under his feathers.
Ask that your wounds may be healed
and that, comforted, you may live again.

Christ, my mother,
you gather your chickens under your wings;
this dead chicken of yours puts himself under those wings.
For by your gentleness the badly frightened are comforted,
by your sweet smell the despairing are revived,
your warmth gives life to the dead,
your touch justifies sinners.
Mother, know again your dead son,
both by the sign of your cross and the voice of his confession.
Warm your chicken, give life to your dead man, justify your sinner.
Let your terrified one be consoled by you;
despairing of himself, let him be comforted by you.
and in your whole and unceasing grace
let him be refashioned by you.
For from you flows consolation for sinners;
to you the blessing for ages and ages. Amen.

This prayer can a bit startling to modern ears, but it's impeccably Biblical: the scriptural basis for the idea of Paul as a mother comes from the apostle's own words in 1 Thessalonians 2:7 and Galatians 4:18-19, while the metaphor of Christ as mother to a brood of chicks comes from Matthew 23:37. The image of a mother bird surrounded by her chicks is one which Anselm employed a number of times, in various contexts: in one story he compares himself to the mother (an owl, in that case) and his monks to the chicks, while in this letter to Matilda, wife of Henry I, he appeals to the queen to take on the role of Christ, the mother-hen. 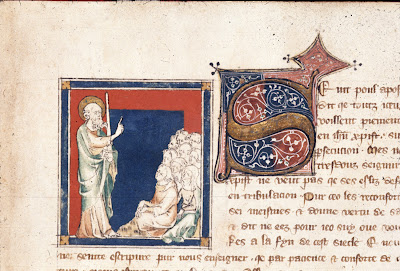