It rains all night, but the public games take place in the morning;
You, Caesar, hold divided empire with Jove.


This pseudo-Virgilian Latin tag seems almost impossibly appropriate on this rainy day of royal pageantry. It was quoted by the author of the Encomium Emmae Reginae in praise of Cnut: he wanted to describe the general awesomeness of the Viking king of England by comparing him to great emperors of the past, and now nearly a thousand years later it seems just as relevant to Cnut's many-times successor, the current Queen.

This BBC slideshow helpfully explains how the pageant just about to begin on the River Thames takes its inspiration principally from the royal displays of the seventeenth and eighteenth centuries, but Anglo-Saxon and Anglo-Danish kings were just as keen on river pageantry. When King Edgar was crowned by Archbishop Dunstan on Whitsunday 973, in the first occurrence of the coronation ceremony which is the basis of the one still used today, he was rowed up the river Dee in great state by six British kings who had submitted to his overlordship. 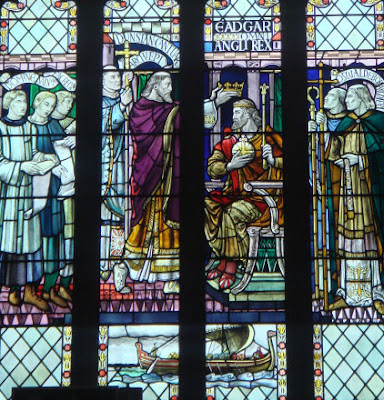 Edgar's coronation depicted at Bath Abbey
The present Queen is Edgar's direct descendant, and is certainly following in his wake today.

As for Cnut, well, he was a Viking: they loved their ships. This is the anonymous encomiast's depiction of Cnut's fleet:


On one side lions moulded in gold were to be seen on the ships, on the other birds on the tops of the masts indicated by their movements the winds as they blew, or dragons of various kinds poured firefrom their nostrils. Here there were glittering men of solid gold or silver nearly comparable to live ones, there bulls with necks raised high and legs outstretched were fashioned leaping and roaring like live ones. One might see dolphins moulded in electrum, and centaurs in the same metal, recalling the ancient fable. In addition, I might describe to you many examples of the same celature, if the names of the monsters which were there fashioned were known to me. But why should I now dwell upon the sides of the ships, which were not only painted with ornate colours, but were covered with gold and silver figures?

The royal vessel excelled the others in beauty as much as the king preceded the soldiers in the honour of his proper dignity, concerning which it is better that I be silent than that I speak inadequately. Placing their confidence in such a fleet, when the signal was suddenly given, they set out gladly, and, as they had been ordered, placed themselves round about the royal vessel with level prows, some in front and some behind. The blue water, smitten by many oars, might be seen foaming far and wide, and the sunlight, cast back in the gleam of metal, spread a double radiance in the air.

There's a bit of poetic license here, but not much!

So great, also, was the ornamentation of the ships, that the eyes of the beholders were dazzled, and to those looking from afar they seemed of flame rather than of wood. For if at any time the sun cast the splendour of its rays among them, the flashing of arms shone in one place, in another the flame of suspended shields. Gold shone on the prows, silver also flashed on the variously shaped ships.

We know of one occasion when these golden dragon-ships rowed down the Thames in glorious procession - on 8 June 1023, when the body of St Ælfheah was carried in state from St Paul's down the river towards Canterbury, accompanied by a magnificant company of earls, archbishops, monks and Viking warriors, and in the presence of the king and queen, Cnut and Emma, and their young son. That was 989 years ago, almost to the very day - and look at the river at this minute! Does anything ever really change?


Quotations from the Encomium Emmae Reginae, ed. and trans. Alistair Campbell (London, 1949).
Posted by Clerk of Oxford at 2:25 pm