The Lady Etheldreda, Nun and Avenger 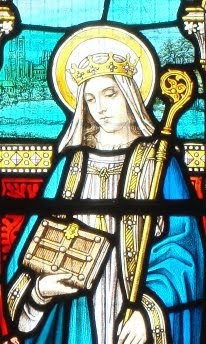 23 June is the feast-day of St Etheldreda of Ely, arguably the most important female saint from Anglo-Saxon England. Etheldreda (also known as Æthelthryth, the Old English form of her name, or as Audrey, a familiar late-medieval version) was the founder of a great monastery and the first in an influential dynasty of royal saints. The story of her life is told in this section of Bede's Historia Ecclesiastica: briefly, she was the daughter of the king of the East Angles, who despite being married twice preserved her virginity in hope of being able to pursue a religious life. She was eventually able to part from her second husband, King Ecgfrith of Northumbria, and fulfilled her wish to become a nun. After a year at the abbey of Coldingham she went to Ely, an island in the Fens situated within her family's ancestral kingdom, where she founded her own abbey with two other women. She died there on 23 June 679. Bede composed a hymn to Etheldreda, which concludes:

Ah bride of Christ, bright fame on earth is thine!
More bright in Heaven thy bridal torches shine.
Exultant hymns proclaim in glad accord:
No power henceforth may part thee from thy Lord.

Ely became a kind of royal family monastery: after Etheldreda's death her sister Seaxburh succeeded her as abbess, to be followed by Seaxburh's daughter Eormenhild, and so on. These powerful women all became honoured as saints and were collectively referred to as the 'lady saints' of Ely - of whom Etheldreda was the first and greatest. Here are some of them in a fifteenth-century English Nottingham alabaster (on display in St Peter Mancroft, Norwich; I apologise for my terrible picture!): 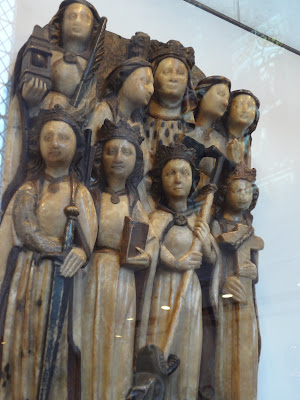 And here's Etheldreda depicted in golden glory in the tenth-century Benedictional of St Æthelwold (BL Additional 49598, f. 90v), where she's the only English woman so honoured: 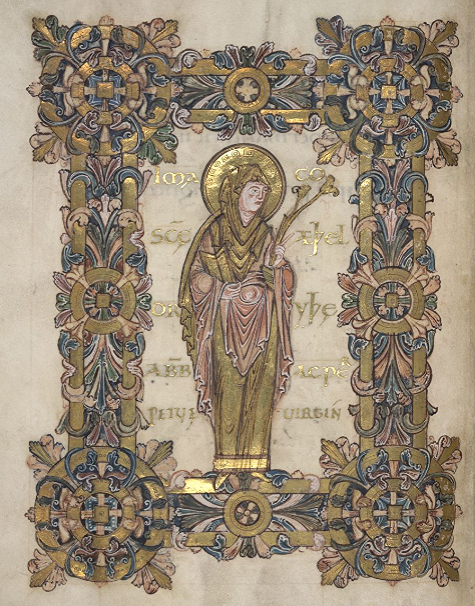 The opening of the blessing for St Etheldreda's day in the same manuscript (f. 91): 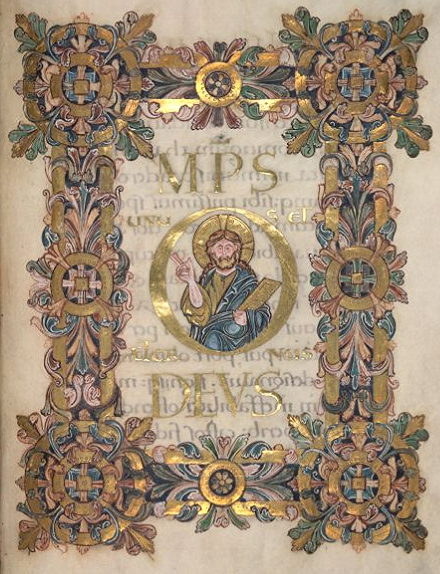 The East Anglian royal house died out two centuries after Etheldreda's lifetime, but her abbey was refounded in the tenth century by the man for whom this glorious manuscript was made, Æthelwold, Bishop of Winchester. His Benedictional presents Etheldreda as one of the chief saints of the English church, one of only two Anglo-Saxon saints given this kind of prominent full-page miniature in the manuscript (the other is Winchester's own St Swithun).

After its refoundation Ely Abbey, of which Etheldreda was patron in life and death, went from strength to strength. It was one of a group of immensely powerful and influential monasteries which dominated the Fenland before and after the Norman Conquest. To illustrate how important it was that kings should win the favour of St Etheldreda, I have to link here to my favourite stories telling how the Danish conqueror Cnut made great efforts to woo the lady of Ely: the tale of Cnut's song and his trip across the icy fen. 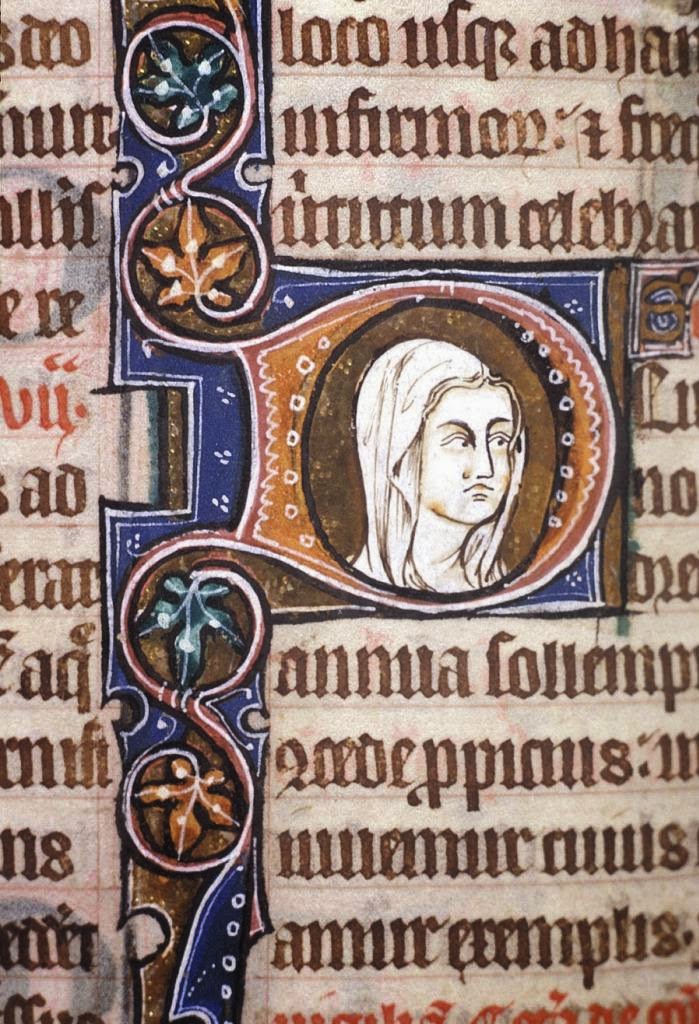 What I find particularly interesting about St Etheldreda - which you might not expect from her life-story - is that in the Ely stories about her appearances after death she's presented as a kind of warrior-queen, a fierce defender of Ely's interests, who could swoop down with frightening power on anyone who attacked her monastery. The monks of Ely (it was a double monastery of monks and nuns in Etheldreda's time, but men-only after its 10th-century refoundation) were apparently perfectly happy to think of their female patron saint as a tough, defend-the-right avenger who could make a Viking cry like a baby.

(Actually she blinded a Viking (who had tried to plunder her tomb) but it's the same thing; see Liber Eliensis i.41.)

Medieval religious houses living in unstable times had few weapons to use in their own defence, but one of their best was the support of a supernatural protector who would avenge their insults and fend off their attackers. Ely had a particularly turbulent time after the Norman Conquest: it gave shelter to various anti-Norman rebels, including Hereward the Wake, and as a result was besieged for a time in 1069-1070. So it was in need of its defender. Here's a characteristic story, the Ely account of the punishment meted out to a Norman named Gervase, deputy of the sheriff Picot, who was (in the opinion of the monks of Ely) unjustly oppressing the monastery:

This man was extremely hostile to St Æthelthryth's people and, as if he had undertaken a special campaign against her, assailed the whole of her property with oppression, whenever he could. So everyone who was for whatever reason oppressed by him, confronted him with the name of the lady saint, with the aim that he might act with greater restraint: he would put one in fetters, pronounce condemnation on another, keep calling another to court, keep on afflicting another with cruelty...


[The abbot is summoned to appear in court against Gervase.]

On the night preceding the day on which the abbot was to come there, St Æthelthryth appeared in the form of an abbess with a pastoral staff, along with her two sisters, and stood before him, just like an angry woman, and reviled him in a terrifying manner as follows: 'Are you the man who has been so often harassing my people - the people whose patroness I am - holding me in contempt? And have you not yet desisted from disturbing the peace of my church? What you shall have, then, as your reward is this: that others shall learn through you not to harass the household of Christ.' And she lifted the staff which she was carrying and implanted its point heavily in the region of his heart, as if to pierce him through. Then her sisters, St Wihtburh and St Seaxburh... wounded him with the hard points of their staves.

Gervase, to be sure, with his terrible groaning and horrible screaming, disturbed the whole of his household as they lay round about him: in the hearing of them all he said, "Lady, have mercy! Lady, have mercy!" On hearing this, the servants came running and enquired the reason for his distress. There was a noise round about Gervase as he lay there and he said to them, "Do you not see St Æthelthryth going away? How she pierced my chest with the sharp end of her staff, while her saintly sisters did likewise? And look, a second time she is returning to impale me, and now I shall die, since finally she has impaled me." And with these words he breathed his last.

Now that this outcome had been arrived at, people went to meet the abbot; the matter was recounted, the abbot returned, and the report spread through the whole of the country. The lady saint became feared among all those who lived nearby, and for a long time none of the nobles, judges, administrators or men who had any power, dared to commit any outrage with respect to the property of Ely, because the holy virgin protected her possessions everywhere in manful fashion.


From the twelfth-century Liber Eliensis, ii.132, translated by Janet Fairweather in Liber Eliensis: A History of the Isle of Ely from the Seventh Century to the Twelfth (Woodbridge: Boydell Press, 2005), pp.252-3.


The story was perhaps inspired by legends about St Edmund of East Anglia's revenge on Svein Forkbeard, and is a piece of wish-fulfilment for the people of an occupied country, who looked to Etheldreda as their best hope of defence. 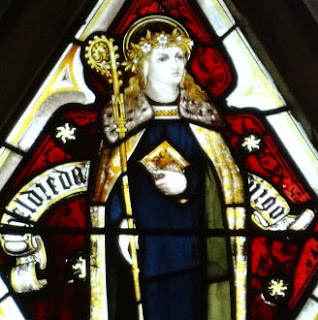 I think St Etheldreda would be astonished and pleased in equal measure to find that this story not only reached the Liber Eliensis, but also no less an auspicious journal than the International Journal of Cardiology http://www.internationaljournalofcardiology.com/article/0167-5273(86)90275-5/abstract.