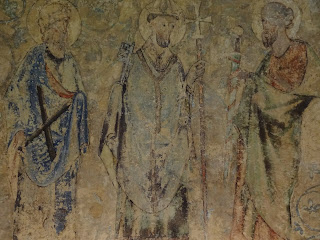 Two of my favourite hymns for two favourite saints. I was baptised in a church dedicated to St Peter on the feast of the Conversion of St Paul, so celebrating them together makes particular sense to me for reasons which are entirely personal. Later today I want to post extracts from Anselm's prayers to both saints, which are wonderful, but first some rousing hymns.

Incidentally, the picture above is a medieval wall-painting of SS. Peter, Paul and Andrew from Norwich Cathedral (I say 'wall-painting', but it's actually on the roof of the loft which is now the Treasury). Here's the same grouping in fifteenth-century alabaster, on display at St Peter Mancroft, Norwich (originally from Chellaston, Derbyshire): 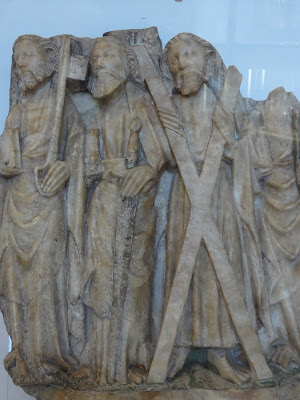 This hymn for St Peter, 'Forsaken once, and thrice denied', is by C. F. Alexander - an underrated hymnwriter, in my opinion. The tune, 'Derry' (appropriately named, since Alexander's husband was Bishop of Derry), can be heard here.


Forsaken once, and thrice denied,
The risen Lord gave pardon free,
Stood once again at Peter’s side,
And asked him, 'Lov’st thou Me?'

How many times with faithless word
Have we denied His holy Name,
How oft forsaken our dear Lord,
And shrunk when trial came!

Saint Peter, when the cock crew clear,
Went out, and wept his broken faith;
Strong as a rock through strife and fear,
He served his Lord till death.

How oft his cowardice of heart
We have without his love sincere,
The sin without the sorrow’s smart,
The shame without the tear!

O oft forsaken, oft denied,
Forgive our shame, wash out our sin;
Look on us from Thy Father’s side
And let that sweet look win.

Hear when we call Thee from the deep,
Still walk beside us on the shore,
Give hands to work, and eyes to weep,
And hearts to love Thee more. 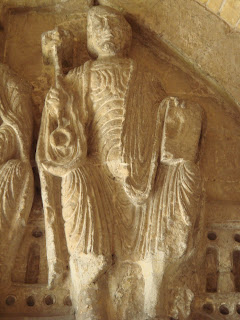 The hymn for St Paul is the splendid 'We sing the glorious conquest', often sung to the tune Ellacombe; it's by John Ellerton, who has featured here before for another lovely hymn. The words are, fittingly, full of paradox and antithesis, wondering in awe and not attempting to explain; I like that in a hymn.

My favourite hymn for St Paul is still 'Athens', though...


We sing the glorious conquest
before Damascus' gate,
when Saul, the Church's spoiler,
came breathing threats and hate.
The ravening wolf rushed forward
full early to the prey;
but lo! the Shepherd met him,
and bound him fast today.

O glory most excelling
that smote across his path!
O light that pierced and blinded
the zealot in his wrath!
O voice that spake within him
the calm, reproving word!
O love that sought and held him
the bondman of his Lord!

O Wisdom ordering all things
in order strong and sweet,
what nobler spoil was ever
cast at the Victor's feet?
What wiser master builder
e'er wrought at thine employ
than he, till now so furious
thy building to destroy?

Lord, teach thy Church the lesson,
still in her darkest hour
of weakness and of danger,
to trust thy hidden power;
thy grace by ways mysterious
the wrath of man can bind,
and in thy boldest foeman
thy chosen saint can find. 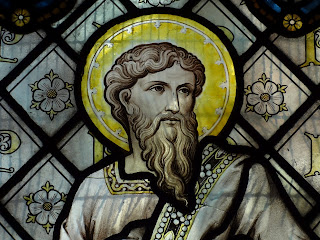