A Medieval Love Poem: Where I have chosen, steadfast will I be 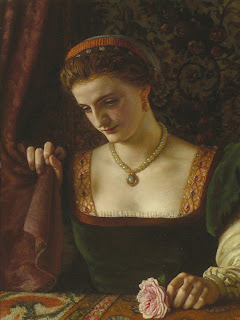 Where I have chosen, steadfast will I be,
Never to repent in will, thought nor deed,
You to serve, whatever ye command me,
Never it withdraw for any manner of dread.
Thus am I bound by your godlyhead,
Which hath me caused, and that in every wise
While I in life endure, to do you my service.

Your desert can none other deserve,
Which is in my remembrance both day and night.
Before all creatures I you love and serve
While in this world I have strength and might,
Which is in duty, of very due right,
By promise made with faithful assurance,
Ever you to serve without variance.


This is another anonymous poem from the fifteenth-century Findern manuscript (like this one and also this). Because some of the Findern poems were probably written by women, this is sometimes described as a 'married woman's affirmation of her vows', or similar. I suppose you can read it that way (making it a more unusual kind of text, which is perhaps why critics find that interpretation attractive), but there's no explicit indication of gender in either direction, and the emphasis on serving the beloved might equally work within the conventions of medieval poetry by men addressing women.

Either way, it is unusual in a number of respects. I like that the emphasis is on the beloved's innate worth (godlyhead) rather than any other quality, such as physical beauty. It shares this feature with the other Findern poems I've posted - none commit themselves to a description of the beloved or say anything about him/her at all, really. There's no attempt to justify or explain the lover's feelings, and because the poem is addressed to the beloved and not some imagined audience, it has a more intimate feel than many medieval love lyrics - it's not 'my lover is beautiful and let me tell you about her' (as this is, for instance), but just 'I love you'. This is, of course, why we can't be sure of the genders involved. It creates a sense of directness and plain-speaking - this could almost be a sonnet by Elizabeth Barrett Browning.

The artlessness is an illusion, of course; the poem is elegantly constructed. The syntax of the last three lines of the first verse is particularly nice (paraphrase: 'I am bound to this by your great worth, which has caused me, in every way, as long as my life lasts, to serve you'). I like how the poem plays with the language and the paradoxical ideas of freedom and obligation. The lover is bound by a promise s/he has freely chosen, but at the same time the promise made was, in a sense, compelled by the innate worth of the beloved: love is a 'duty, [born] of due right'. My favourite line is 'Your desert can none other deserve' which is almost tautological but not quite - it means, roughly, 'You deserve so much that you can deserve nothing else but this (to be loved and served by me)'.

Essentially the poem says 'Your goodness is such that I am bound to love you, and having made myself bound to love and serve you, I will keep my promise without changing or repenting of it.' I think this poet would have agreed with Chesterton on the subject of marriage vows:

The revolt against vows has been carried in our day even to the extent of a revolt against the typical vow of marriage. It is most amusing to listen to the opponents of marriage on this subject. They appear to imagine that the ideal of constancy was a yoke mysteriously imposed on mankind by the devil, instead of being, as it is, a yoke consistently imposed by all lovers on themselves. They have invented a phrase, a phrase that is a black and white contradiction in two words - 'free-love' - as if a lover ever had been, or ever could be, free. It is the nature of love to bind itself, and the institution of marriage merely paid the average man the compliment of taking him at his word. Modern sages offer to the lover, with an ill-favoured grin, the largest liberties and the fullest irresponsibility; but they do not respect him as the old Church respected him; they do not write his oath upon the heavens, as the record of his highest moment. They give him every liberty except the liberty to sell his liberty, which is the only one that he wants.

"Where I have chosen, steadfast will I be". That first line reminds me of the opening of this song, the lament of another woman unshakeably faithful to her lover:


Here's the unmodernised text of the poem:

Where Y haue chosyn, stedefast woll I be,
Newyre to repente in wyll, thowt ne dede,
Yow to sarue watt ye commaund me,
Neuer hyt withdrawe for no maner drede.
Thus am Y bownd by yowre godelyhede,
Wych hathe me causyd, and that in euery wyse
Wyle I in lyfe endure, to do yow my servyse.

'Your desert can none other deserve' is quite an interesting line as it seems to suggest that the person is dry and empty of substance? If you call someone a desert you're not usually being complementary!

It's 'desert' in the sense of 'the thing which you deserve' (as in 'just deserts').