A Recipe for Happiness: Be Merry and Endure

A sixteenth-century song with advice on how to live a happy life - or at least a trouble-free one:

He is wise, so most I goo,
That can be mery and suffer woo.

Be mery and suffer, as I the vise,
Wherever thow sytt or rise;
Be well ware whom thow dispise;
Thou shalt kysse who is thy foo.

Beware to whom thou spek thy will,
For thy speche may greve the ill;
Here and see, and goo than still;
But well is he that can do soo.

Many a man holdyth hym so stowght
Whatsoever he thynk, he seyth it owt;
But if he loke well abowt,
His tonge may be his most foo.

'Be mery,' now is all my songe;
The wise man tawght both old and yonge;
'Who can suffer and hold his tonge,
He may be mery and nothyng woo.'

Yff any man displese the owght,
Suffer with a mery thowght;
Let care away, and greve the nowght,
And shake thy lappe, and let it go.

Here's a literal translation of the song:

He is a wise man, as I may go, who can be merry and endure pain.

Be merry and endure, I advise you, wherever you sit or rise [i.e. wherever you are]; be very careful whom you scorn, for you may be forced to associate with someone who has been your enemy.

Be careful to whom you speak your mind, for your words may come to cause you harm; listen and watch, and keep quiet. Well is it for him who can do this!

Many a man holds himself so proud that whatever he thinks, he says it straight out; but if he look carefully about himself, he may find his tongue his greatest foe.

"Be merry," now is all my song. The wise man taught to both old and young: "Whoever can endure and hold his tongue, he may be merry and never sorrow."

If anyone displease you in any way, endure it with merry thoughts; let care go, and do not trouble yourself, and shake your lap,  and let it go.


As may I go is an emphatic oath meaning 'certainly, for sure', along the lines of something like 'as I live and breathe', and a lap is the skirt of a garment, so to 'shake your lap' is just a careless gesture, like turning on your heel, or shaking the dust off your feet.

The words of this song are preserved, without music, in a sixteenth-century manuscript which belonged to a London grocer named Richard Hill. It's his commonplace book, containing a large number of carols in English, French and Latin, and also (to quote the Oxford Book of Carols) "commercial entries, tables of weights, prices, dates of fairs, medical and cooking recipes (including a 'medicen for a dog that is poysent', and 'a good medycyne for a cutt' which begins 'Take a pynte of good ale'), a form for making letters of attorney, a list of diaper table-cloths, &c., for the mayor's annual feast at the Guildhall, rules for purchase of land, the bread assize, a treaty on wine, dates of his children, pious ejaculations and reflections, notes on the breaking in of horses, the 'crafte to brewe bere', forms for business letters in English and French, riddles, puzzles, with many humorous and satirical verses". Hill was a man of diverse interests! The Christmas carols in the manuscript include versions of some now-famous ones (the Corpus Christi Carol, the Boar's Head Carol, 'The Holly and the Ivy', 'Tyrle, Tyrlow') as well as some of my more obscure favourites, such as 'A little child there is ybore', 'A babe is born all of a may', 'Tidings true', 'This endris night' and 'In Bethlehem, that fair city'. Richard Hill had excellent taste in carols - and just as well, or some of these songs might have been completely lost to history. The manuscript was discovered in the mid-19th century, hidden behind a bookcase, and is now Oxford, Balliol College 354 - you can see images of it (though it's not much to look at!) here.

This song belongs to a little sub-genre of late medieval verse, poems of cynical advice whose attitude could perhaps be summarised as 'the world is always going to be unjust, cruel and deceitful, so you might as well enjoy yourself'. Especially typical is the advice to hold your tongue and stay out of trouble by keeping your thoughts to yourself. It's a kind of secular, jaded version of the musings on earthly transience which form such an important strain in medieval poetry - exemplified by poems like 'This world fareth as a fantasy' or 'All earthly joy returns to pain', which take a more philosophical approach to the same essential theme of the untrustworthiness of the world. The general idea is pithily encapsulated in a couplet by the Scottish poet William Dunbar, from a roughly contemporary poem:

Man, please thy maker and be merry
And set not by this world a cherry. 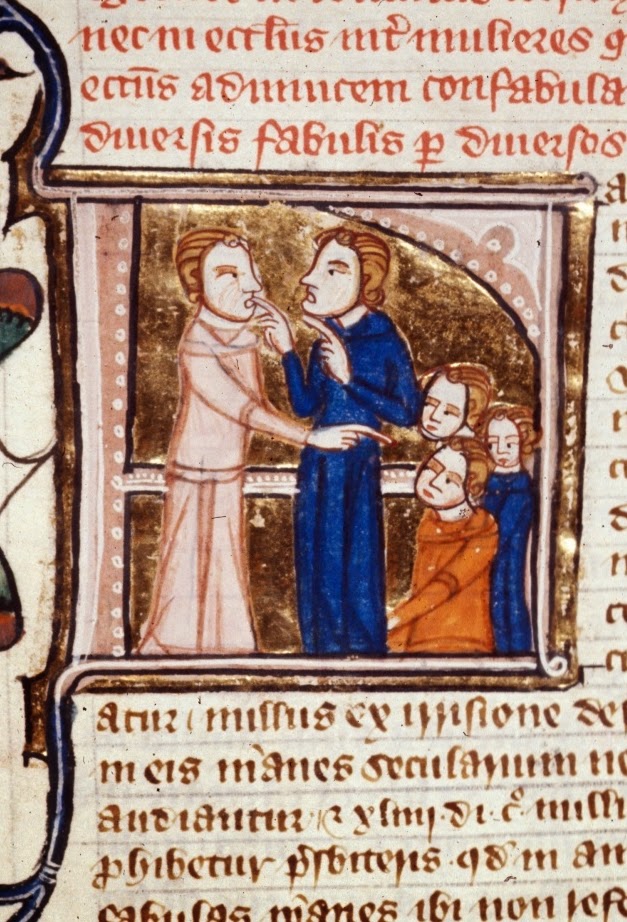 CSLewis quotes the Dunbar couplet in one of his books, possibly The Discarded Image. "Pithy" a good adjective. Much in two lines.