Evening in the Village 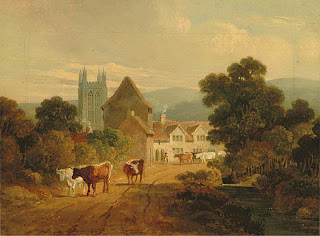 Now the light o' the west is a-turn'd to gloom,
An' the men be at hwome vrom ground;
An' the bells be a-zendén all down the Coombe
From tower, their mwoansome sound.
An' the wind is still,
An' the house-dogs do bark,
An' the rooks be a-vled to the elems high an' dark,
An' the water do roar at mill.

An' the flickerén light drough the window-peäne
Vrom the candle's dull fleäme do shoot,
An' young Jemmy the smith is a-gone down leäne,
A-plaÿén his shrill-vaiced flute.
An' the miller's man,
Do zit down at his ease
On the seat that is under the cluster o' trees,
Wi' his pipe an' his cider can.

This is another William Barnes poem (as if you couldn't tell!). I was struggling to imagine exactly how this Dorset dialect would sound, so I went to the British Library's sound archive and found this lovely recording of a Dorset farmer made in 1956; he was born in 1871 and Barnes died in 1886, so I guess this is not far off. And the life he describes is pure Thomas Hardy (because this is Hardy's Wessex, of course) - listen to what he says about how much cider people used to drink!

I just love the BL sound archive - it's such a treasure-trove of fascinating things! And the Survey of English Dialects is so interesting. I imagine some of my international readers will never have heard many of these accents, since you'd never hear them on TV and so many are disappearing. The most distinctive ones belong to people born at the end of the nineteenth century, like our Dorset farmer. I especially love listening to the different accents of southern England: in Suffolk this year I was fascinated to hear a young gardener who sounded pretty much exactly like this, and if you're lucky in Oxford you can still overhear people who sound like this, a lovely Oxfordshire accent (listen to how they say 'excited' and 'let us pray'). And here's a thick Crowland accent (I love how he says 'Peterborough') and a shepherd from Hampshire (a voice straight out of Jane Austen country!); here's a Kentish one from near Canterbury - the name of which the speaker pronounce something like 'Cannerberry', which I don't think I've ever heard anyone say today. And the woman from the Isle of Wight is interesting linguistically (listen for her pronouns) but very moving, too.
Posted by Clerk of Oxford at 10:26 pm