Some Pictures of North Hinksey Church

After posting the poem 'Ferry Hinksey' the other day, I took a walk to the nearby village of North Hinksey to get a good look at its church. I've been to the village before (it has a particularly excellent pub) but not to the church, because it's only open on Tuesdays and Fridays, so you have to pick your time. And here's some pictures of what I found there.

As I mentioned the other day, this bit of Oxford is now disfigured by a fairly ugly industrial estate. So the walk to North Hinksey is not up to much. This was the highlight: 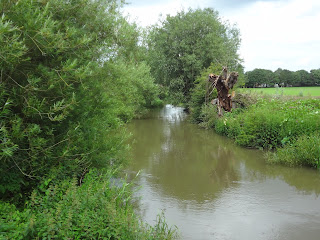 OK, this bit was quite nice: 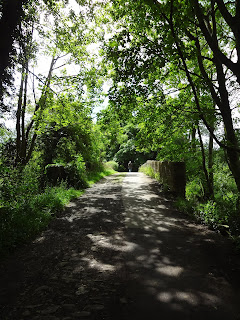 This path is called 'Ruskin's Ride' or 'Willow Walk' (do you see any willows? Me neither...) because John Ruskin, when he was living in Oxford, used to ride out this way to North Hinksey. I'm getting this from wikipedia, but it seems true. And he organised a group of undergraduates to build a road between North Hinksey and South Hinksey, including, implausibly, a 19-year-old Oscar Wilde. Perhaps unsurprisingly, such a road still doesn't exist...

Anyway, this is what the church of St Lawrence, North Hinksey, looks like: 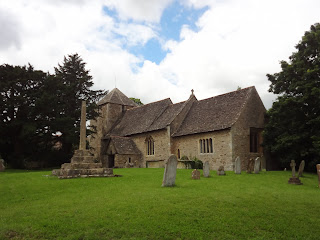 The stone is a lovely warm colour - Cotswold stone, I suppose. And there's something charming about how higgledy-piggledy the roof is! The church has a good solid stone porch, too: 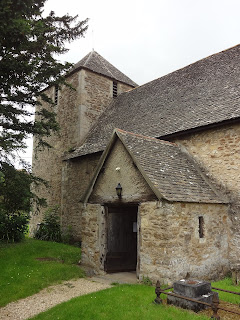 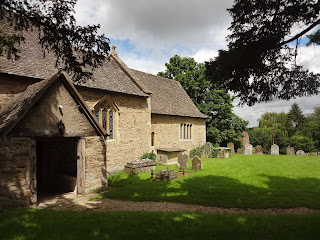 The porch is kind enough to protect the church door, and its jazzy 12th-century carving: 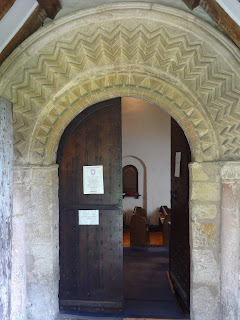 Not quite as splendid as Iffley, but pretty great nonetheless. 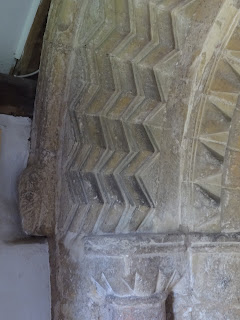 Inside, the church is all fancy and whitewashed, which is probably very practical and certainly helps brighten the place up, but slightly kills the atmosphere. (My love of the Gothic, in both senses of the word, leads me to prefer the damp and dark of Binsey). 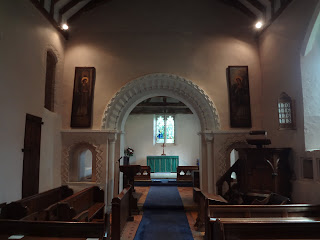 That central arch, which at first glance looks like an exciting continuation of our medieval exuberance ('without the concomitant crudities of the period'), is actually Victorian. Not bad, though: 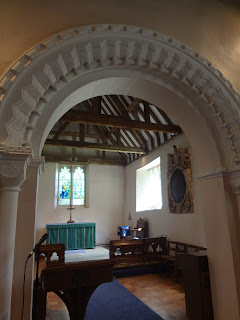 And the door to the rood loft survives, so there's that: 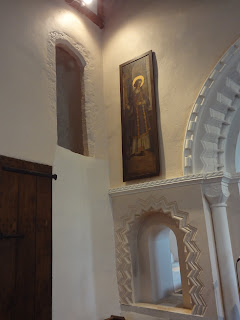 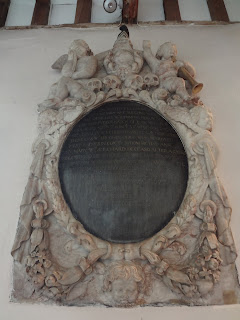 "Reader, look to thy feet: honest and loyal men are sleeping under them. There lies William Fynmore, Fellow of St John's in Oxford, & Batchelor of Law, who in the year of his age 87, and in the year of our Lord 1646, when loyalty and the church fainted, lay down and died... 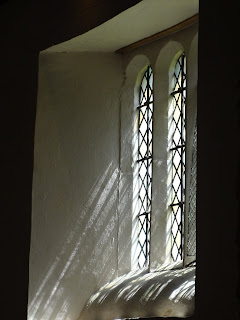 There's a tiny, deep-set Norman window on one side of the chancel: 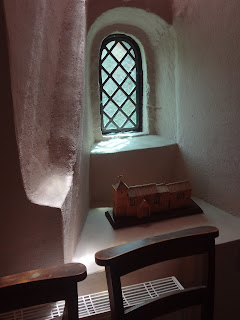 And I really liked two small stained glass windows, one above this window and the other directly opposite it - this: 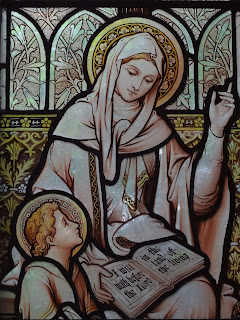 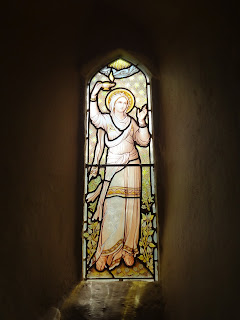 The first is Eunice teaching her son Timothy, and the second is, I assume, Hope or Faith or something along those lines. Whatever her name, the light was coming in beautifully around her feet: 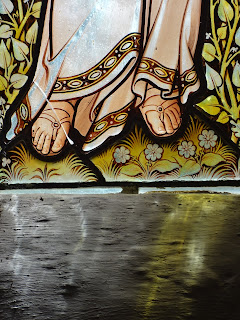 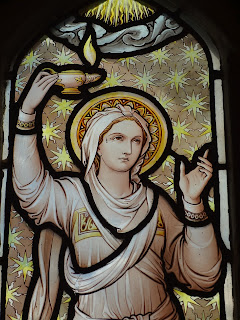 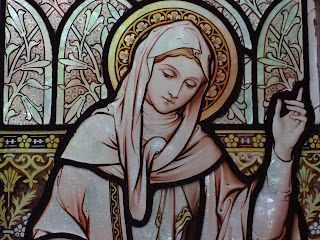 And that's what I saw at North Hinksey.
Posted by Clerk of Oxford at 9:40 pm