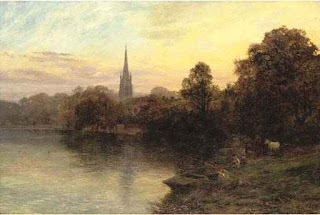 Beyond the ferry water
That fast and silent flowed,
She turned, she gazed a moment,
Then took her onward road

Between the winding willows
To a city white with spires:
It seemed a path of pilgrims
To the home of earth's desires.

Blue shade of golden branches
Spread for her journeying,
Till he that lingered lost her
Among the leaves of Spring.

This poem, by Laurence Binyon, is set in a landscape which no longer exists: Ferry Hinksey, a rural area between the city of Oxford and the village of North Hinksey, has been swallowed up by an industrial estate. Somehow that makes the poem, already sweetly poignant, a little more melancholy.
Posted by Clerk of Oxford at 8:41 pm