Medieval Prayers to a Guardian Angel

Today I was reading about devotion to guardian angels in the Middle Ages, and came across the interesting idea that it was a particularly localised devotion, popular only in certain countries - England among them. R. W. Southern notes in Saint Anselm and his Biographer that the majority of medieval examples for prayers to guardian angels come from England, ranging from the 9th to the 15th century. One early English example is provided by the Canterbury monk and historian Eadmer: late in life, perhaps in the 1120s, Eadmer wrote a meditation on the subject of his guardian angel, describing how he had once greatly desired to know his angel's name and how it had been revealed to him. Speaking of the period when he was in exile from England with Anselm (some time between 1097-1107), he says:


I was one of the servants and companions of [Anselm's] journey, and being far from my native soil and from my compatriots and friends, I often sat alone and turned over in my mind many things, some of them transitory and temporal, and some - but much more rarely - eternal. At times the enormity of my sins overcame me, and I sighed with confusion and wondered at the long-suffering patience and goodness of God. It seemed to me that I saw Him depute some good guardian to defend me from the attacks of the evil demons... Meditating often about this, I desired greatly to know the name of my guardian, so that I could, when possible, honour his memory with some act of devotion. One night I fell asleep with this thought and behold, someone stood by me saying my prayer was heard, and that I might know without doubt that the name I desired to know was Gabriel.

I'd love to know how Eadmer might have talked about his guardian angel in his native tongue, but for vernacular English prayers on the same subject we have to look a good bit later. Here's a fifteenth-century one, headed 'To the gud angell':

O angell dere, wher-euer I goo,
Me that am comytted to thyne awarde,
Saue, defende, & govern also,
That in hewyn with the be my reward.

Clense my sowle from syn þat I haue do,
& vertuously me wysse to godward!
Shyld me from þe fende evermo,
& fro the paynes of hell so hard.

O thou cumly angell, so gud & dere,
þat ever art abydyng with me;
Thowgh I may nother the se nor here,
Yet devoutely with trist I pray to the.

My body & sowle thou kepe in fere,
With soden deth departid þat they not be!
For þat ys thyn offes, both fere & nere,
In every place wher ever I be.

O blessid angell, to me so dere,
Messangere of God Almyght,
Govern my dedis & thowght in fere,
To þe plesaunce of God, both day & nyght.

This comes from Oxford, Balliol College MS. 354. I was interested to see that the poem doesn't actually use the phrase 'guardian angel', although that clearly is the relationship envisaged - a single angel whose 'office' is to guide and guard one particular individual. So I looked up 'guardian angel' in the OED to see how old the phrase is in English. The earliest instance it cites for the phrase is from John Donne's 'The Relique' ('Difference of sex no more we knew/ than our guardian angels do'), which is a slightly uncertain example; the first clear instance of the phrase in the sense we understand it today is from 1760. That's very late for a concept which is so ancient. There were various earlier phrases; I don't think there's an Old English phrase which exactly parallels the term, although Ælfric says in his sermon about angels that Micel wurðscipe is cristenra manna, þæt gehwilc hæbbe fram his acennednysse him betæhtne engel to hyrdrædene 'It is a great honour for Christians that each person, from birth, has an angel assigned to him as a guardian'. Hyrde (as in our shepherd, cowherd) is a common OE word for guardian, so perhaps that's the closest we can get to an Old English term.

A later medieval name seems to have been 'good angel', as this poem's heading suggests - though the Middle English Dictionary also offers 'familiar angel' as a medieval expression, which is pretty great. (I can't resist observing that the Old Norse word for a guardian angel (in the Christian sense) seems to be exactly the same as the word for a familiar spirit (in the pagan sense) - fylgja. Those familiar spirits, in the Poetic Edda and in the sagas, can take the form of animals, troll-women or giantesses, and scary valkyrie-like female spirits - so what that tells you about what medieval Scandinavians thought guardian angels were, I don't know...)

Here's a translation of the poem above:

'To the good angel'

O angel dear, wherever I go,
Me that am committed to thy guard,
Save, defend, and govern also,
That in heaven with thee be my reward.

Cleanse my soul from sin that I have done,
And virtuously guide me to God-ward.
Shield me from the fiend evermore,
And from the pains of hell so hard.

O thou comely angel, so good and dear,
That ever art abiding with me,
Though I may not thee see or hear,
Yet devoutly with trust I pray to thee.

My body & soul keep thou in fere, [both together]
That by sudden death they may not parted be;
For that is thine office, both far & near,
In every place, wherever I may be.

O blessed angel, to me so dear,
Messenger of God Almight,
Govern my deeds and thoughts in fere,
To please my God, both day and night. 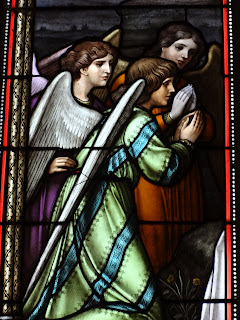 Here's another prayer to a guardian angel, from a fifteenth-century prayer book (BL, Harley 2445):

O Gloriouse angell, to whom our blessyd lord of his most mercyfull grace hath taken me to kepe: to thee, I, synful creature, crye and calle, with hertely mynde, besechyng the ever to be singuler comfort to me in all my nede. Suffer me never to be over come with tentacyon or synful dede, but helpe me, that by grace I may ever in virtuous livynge procede. At the hour of my deth be present, that my gostly enemy in me have noo power. And after bryng me to the blysse, where ever with the I may lyve and prayse our Saviour. Amen.


[O glorious angel, to whom our blessed Lord in his most merciful grace hath entrusted me for protection, to thee, I, sinful creature, cry and call with a sincere mind, beseeching thee ever to be a special comfort to me in all my need. Permit me never to be overcome by temptation or sinful deeds, but help me, that by grace I may ever proceed in virtuous living. Be present at the hour of my death, that my ghostly enemy may have no power over me, and afterwards bring me to the bliss where I may live and praise our Saviour forever with thee. Amen.] 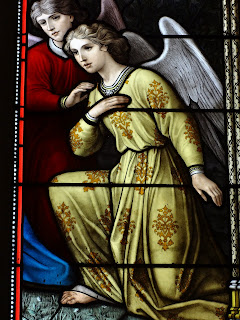 
And another from the same manuscript (I found them both in this book):

A, good Curtyes aungell ordyned to my governale, I knowe wele my feblenes and my unkonnyng. Also wel I wote that strength have I none to do Goddes servyce, but only of his grace, and of your besy kepyng. The connynge I have cometh no thynge of me, but what God wyll sende me be your good entysynge. Now good gracyous aungell, I aske you lowely mercy, for lytell hede I have takyn of your good besynes, but now I thanke you as I can, with full herte besechyng you that ye kepe me truely this day, and evermore, slepynge and wakyng with syker defenyng and your holy techeynge. Defend me and kepe me from bodely hermes, defende me and kepe me from goostly perelys, to goddes worchippe and savyng of my soule. Teche me and wysshe me my wyttes for to dyspende, most to goddes worchipe and pleasynge, fede me with devocyon and savour of goostly swetnes, conforte me whan nede is ayenst my ghoostly enemes, and suffice me not to lese thi grace that ys grantyd me, but of your worthy offyce kepe me in goddes servyce to my lyves hende. And after the passynge of the body, presente my soule unto the mercyfull god: for though I fall alday by myn owne freelte, thou I take in wyttnes that ever I hope in mercy. Gladly wolde I worship the and i myght to you : lykyng therefore god to worship for you, thou also in hym after his holy techeyng, I thank hym with holy prayer.


[Ah, good courteous angel ordained for my protection, I know well my feebleness and my ignorance. Also well I know that I have no strength to do God's service, except only by his grace, and by your busy care. The knowledge I have comes in no way from me, except what God chooses to send me at your good entreaty. Now good gracious angel, I ask you humbly for mercy, for I have taken little heed of your good busyness, but now I thank you as I can, with full heart beseeching you that ye keep me truly this day, and evermore, sleeping and waking, with sure defending and your holy teaching. Defend me and keep me from bodily harms, defend me and keep me from spiritual perils, for the worship of God and the salvation of my soul. Teach me and guide me how to use my wits for the greatest honour and pleasure of God, feed me with devotion and savour of spiritual sweetness, comfort me when there is need against my spiritual enemies, and permit me not to lose the grace that is granted me, but by your worthy office keep me in God's service to my life's end. And after the passing of the body, present my soul unto merciful God: for though I fall every day by my own frailty, thou I take in witness that I ever hope in mercy. Gladly would I honour thee, if I might, to thy satisfaction; therefore to honour God for you, and thou also in him according to his holy teaching, I thank him with holy prayer.] 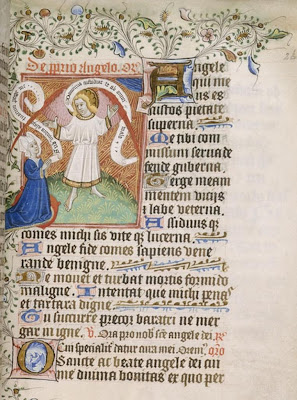 A fifteenth-century lady prays to her guardian angel, from Royal 2 A XVIII
Posted by Clerk of Oxford at 5:27 pm

This is very interesting - I haven't heard of the monk Eadmer, and now I'm interested to know more about him. Thank you.