"What a place to be in is an old library!" 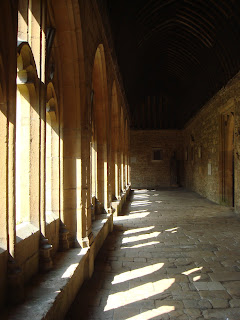 An extract from Charles Lamb's essay 'Oxford in the Vacation', published in The Essays of Elia in 1823:


'...I am plain Elia - no Selden, nor Archbishop Usher - though at present in the thick of their books, here in the heart of learning, under the shadow of the mighty Bodley.

I can here play the gentleman, enact the student. To such a one as myself, who has been defrauded in his young years of the sweet food of academic institution, nowhere is so pleasant, to while away a few idle weeks at, as one or other of the Universities. Their vacation, too, at this time of the year, falls in so pat with ours. Here I can take my walks unmolested, and fancy myself of what degree or standing I please. I seem admitted ad eundem. I fetch up past opportunities. I can rise at the chapel-bell, and dream that it rings for me. In moods of humility I can be a Sizar, or a Servitor. When the peacock vein rises, I strut a Gentleman Commoner. In graver moments, I proceed Master of Arts. Indeed I do not think I am much unlike that respectable character. I have seen your dim-eyed vergers, and bed-makers in spectacles, drop a bow or a curtsy, as I pass, wisely mistaking me for something of the sort. I go about in black, which favours the notion. Only in Christ Church reverend quadrangle I can be content to pass for nothing short of a Seraphic Doctor. 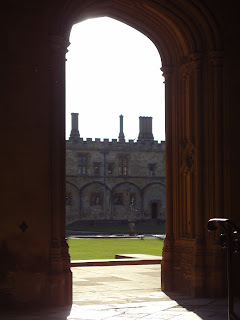 The walks at these times are so much one's own, - the tall trees of Christ's, the groves of Magdalen! The halls deserted, and with open doors, inviting one to slip in unperceived, and pay a devoir to some Founder, or noble or royal Benefactress (that should have been ours) whose portrait seems to smile upon their over-looked beadsman, and to adopt me for their own. Then, to take a peep in by the way at the butteries, and scullieries, redolent of antique hospitality; the immense caves of kitchens, kitchen fireplaces, cordial recesses; ovens whose first pies were baked four centuries ago; and spits which have cooked for Chaucer! Not the meanest minister among the dishes but is hallowed to me through his imagination, and the Cook goes forth a Manciple.

Antiquity! thou wondrous charm, what art thou? that, being nothing, art everything! When, thou wert, thou wert not antiquity - then thou wert nothing, but hadst a remoter antiquity, as thou calledst it, to look back to with blind veneration; thou thyself being to thyself flat, jejune, modern! What mystery lurks in this retroversion? or what half Januses are we, that cannot look forward with the same idolatry with which we for ever revert! The mighty future is as nothing, being everything! the past is everything, being nothing!

What were thy dark ages? Surely the sun rose as brightly then as now, and man got him to his work in the morning? Why is it we can never hear mention of them without an accompanying feeling, as though a palpable obscure had dimmed the face of things, and that our ancestors wandered to and fro groping! 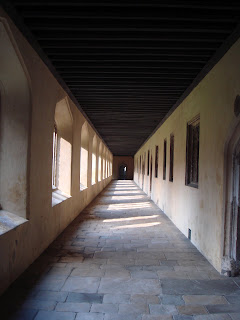 Above all thy rarities, old Oxenford, what do most arride and solace me, are thy repositories of mouldering learning, thy shelves --

What a place to be in is an old library! It seems as though all the souls of all the writers, that have bequeathed their labours to these Bodleians, were reposing here, as in some dormitory, or middle state. I do not want to handle, to profane the leaves, their winding-sheets. I could as soon dislodge a shade. I seem to inhale learning, walking amid their foliage; and the odour of their old moth-scented coverings is fragrant as the first bloom of those sciential apples which grew amid the happy orchard.

Still less have I curiosity to disturb the elder repose of MSS. Those variae lectiones, so tempting to the more erudite palates, do but disturb and unsettle my faith. I am no Herculanean raker. The credit of the three witnesses might have slept unimpeached for me. I leave these curiosities to Porson, and to G.D. [his friend George Dyer] - whom, by the way, I found busy as a moth over some rotten archive, rummaged out of some seldom-explored press, in a nook at Oriel. With long poring, he is grown almost into a book. He stood as passive as one by the side of the old shelves. I longed to new-coat him in russia, and assign him his place. He might have mustered for a tall Scapula. 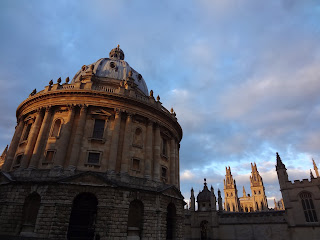 D. is assiduous in his visits to these seats of learning... D. is delightful anywhere, but he is at the best in such places as these. He cares not much for Bath. He is out of his element at Buxton, at Scarborough, or Harrowgate. The Cam and the Isis are to him 'better than all the waters of Damascus.' On the Muses' hill he is happy, and good, as one of the Shepherds on the Delectable Mountains; and when he goes about with you to show you the halls and colleges, you think you have with you the Interpreter at the House Beautiful.' 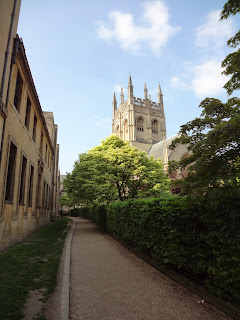 Lamb's picture of an Oxford denuded of its undergraduates resonates with me, as I sit here in the silent, nearly empty Radcliffe Camera (even the shelves are empty; they move books around in the vacation). Today, unlike in 1823, the streets are packed with tourists, but within the corridors of deserted colleges and libraries the sense of being alone with antiquity is very strong. There is no feeling so equally humbling and heartening: to be surrounded by the past, "that, being nothing, art everything".

As I was preparing this post and waiting for the pictures to upload, I got an email advertising an upcoming conference. It's about working with archives - Lamb's winding sheets for the souls of dead scholars. This conference will be "demystifying and demonstrating the skills needed to make new histories"; "[t]oo long associated with settled dust, archival research will be championed as engaged and engaging: a rigorous but permissive field." Too long associated with settled dust! Ouch. Nothing could provide a sharper contrast to Lamb's half-reverent, half-mocking attitude to the scholarship of the past, and his understanding of how quickly the present moment becomes history. It's always a source of amusement to me how terrified modern academia is of appearing to be anything less than modern. You don't have to disparage the past in order to find new ways of talking about it; all academics do by attempting to demystify a field in that way is to create new mysteries - new jargon, ever-more alienating to non-academics, and enacting a kind of shaming towards people who study the past because they love it. As if one could not feel 'engaged' with settled dust!

I can't help feeling that, judging by the numbers of tourists who come to take pictures of Oxford in the vacation, the mystery of ancient libraries and shelves of settled dust possess as much charm for your average person today as they did for Charles Lamb. If academics really want to demystify our arcane and exclusionary fields, we should stop pretending that charm is a bad thing. 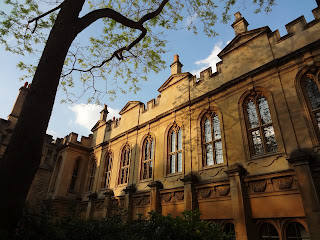