The Translation of St Thomas Becket

Today, 7th July, commemorates the anniversary of the translation of St Thomas Becket in 1220, when his tomb in Canterbury Cathedral was opened and his relics moved to a grander shrine. Becket had been canonised in 1173, less than three years after his murder in the cathedral on 29 December 1170, after a popular belief in his sanctity and the healing power of his blood had sprung up in Canterbury. However, for various reasons (a devastating fire in the cathedral in 1174, conflicts between the monks and their archbishops) the translation of his body did not take place until 1220, exactly fifty years after Becket's death. It was presided over by Archbishop Stephen Langton, in the presence of the teenage Henry III and great crowds of people. St Thomas' new shrine was in the most prominent position in the cathedral, behind the high altar; this candle now marks the site of the shrine, which was destroyed at the Reformation: 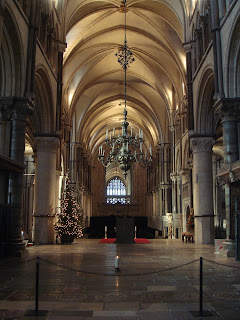 There are a number of surviving medieval English songs in honour of St Thomas Becket, and I've posted about some of them on this blog here, here and here. The popularity and significance of St Thomas are vividly illustrated by these texts - he's unusual among English saints in having so many songs in his honour. Today I thought I'd post another example, which survives in a 15th-century manuscript of polyphonic songs (British Library, MS. Egerton 3307), and is preserved together with its music:

Al Holy Chyrch was bot a thrall
Thorgh kyng and temperal lordys all,
To he was slane in Cristys hall
And set all thing in unite:
Hys deth hath such auctorite.

The kyng exilyed hym owt of land
And toke hys good in hys hond,
Forbedyng both fre and bond
That no prayer for hym schuld be,
So fers he schewyd hys crewelte.

Sex yer he had povert and wo;
The sevent yer hom he schuld go;
Sum hopyd of pes, sum dyd not so,
Bot he was welcom to hys se,
Derly desyryd of ilk degre.

The corn overcast, the chaff lyght law:
The kyng in hys ost ys overthraw:
The tyler on ground hys brayn hath saw,
As Crist seyd hym at Pountane,
'My chyrch with thi blod halowyd schal be.'

Saint Thomas honour we,
Through whose blood Holy Church is made free.

All Holy Church was but a thrall
Through king and temporal lords all,
Until he was slain in Christ's hall
And set all things in unity:
His death has such auctorite. [power]

The king exiled him out of the land
And took his goods into his own hand,
Forbidding to both free and bond [free men and servants, i.e. everyone]
That no prayer for Thomas said should be -
So fiercely he showed his cruelty!

All were exiled who to him belonged,
Women, children, old men too,
Young babes who wept instead of sang;
Saint Thomas said, 'Welcome ye be;
This land is now your own country.'

Six years he had poverty and woe;
The seventh year home he should go;
Some hoped for peace, some did not so,
But he was welcome to his see,
Dearly desired by each degree. [i.e. by every class of people]

The king but a little while him spared:
Knights in church his crown off pared;
Thus the corner-stone was squared
Between clergy and temperalty,
To knit peace and unity.

[In other words, by Thomas' death, 'a corner-stone was established to bring peace and unity between clergy and laymen'.]

The corn is cast down, the chaff lies low:
The king in his ost is overthrown:
The tiller on the ground his brayn hath sown,
As Christ said to him at Pontigny,
'My church with thy blood hallowed shall be.'

[This verse is clever: if I'm reading it right, the first three lines contains some nice wordplay centring on the idea that Thomas, as a martyr, is like a grain of wheat which dies so that it may live. It literally means, 'the seed is sown, the chaff is thrown away; the king, with all his power, is overthrown; the tiller has sown grain upon the ground', but an ost is also a furnace for the drying of grain (as in oasthouse) and brayn refers both to grain (like bran) and to the fact that Thomas' brains were famously scattered across the ground by his murderers.]

On a Tuesday born, accused also,
On a Tuesday exiled from his friends,
Comfort from Christ to dread no woe,
Called home, translated was he -
Thus seven Tuesdays worshipped the see.

[According to legend though not, in fact, to history, all the significant events in Thomas Becket's life happened on a Tuesday - his birth, accusation by the king, exile, the comfort given to him by Christ saying he would be a martyr but that he should not be afraid, his death, and his translation.] 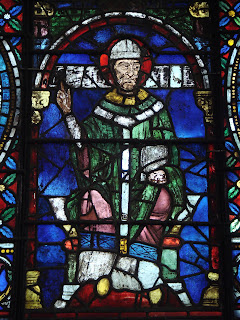 St Thomas Becket in Canterbury Cathedral
Some of the events in Thomas' life referred to in this carol are illustrated in a manuscript made around a century after his translation, the 'Queen Mary Psalter' (which you can explore on the British Library's website here). It tells the story of the life and death of Thomas Becket with more than twenty spirited illustrations, from a romantic tale of the baptism of his mother to the martyr's soul being brought before Christ. Here's a selection, beginning with the marriage of Thomas' parents (f.289v): 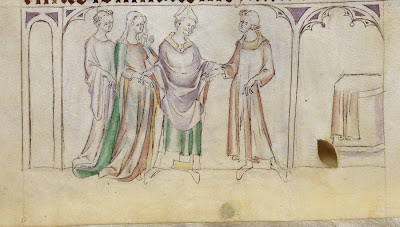 And the birth of Thomas, lying swaddled in his cradle (f.290): 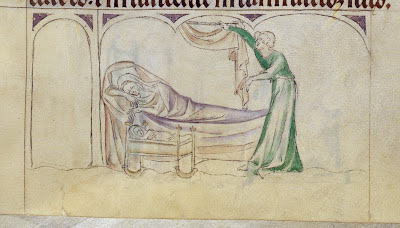 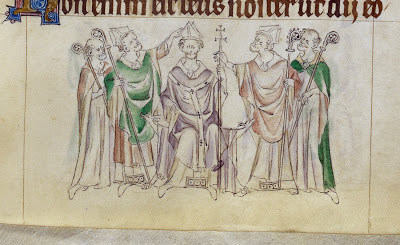 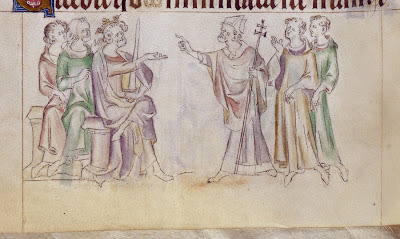 As told in the carol, Thomas' family are forced into exile, babes and all (f.293): 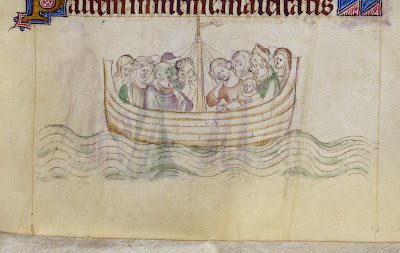 In exile at Pontigny, Thomas has a vision of Christ (f.296), telling him (as the carol has it) 'My church with thy blood hallowed shall be': 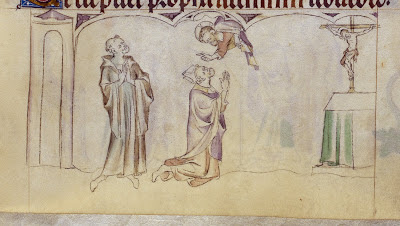 He returns to England and is reconciled with the king, but, alas: 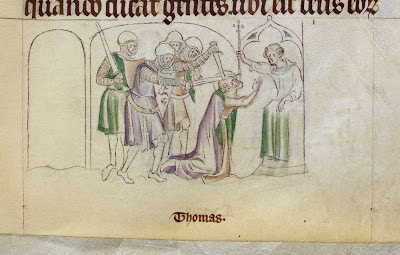 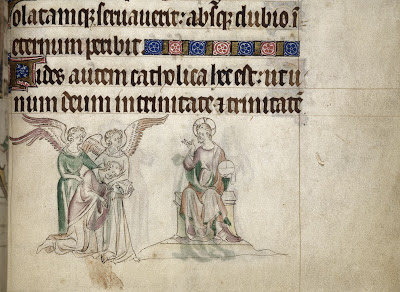 The last picture I'll show you is of an absence - the calendar page for July, with Becket's name erased at the entry for today's feast (it's even more obvious in the page for his feast in December): 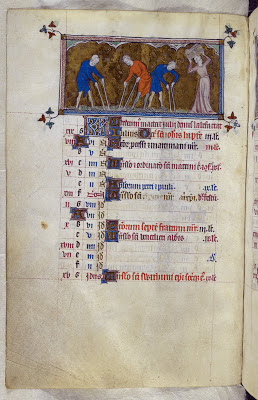 As this British Library blogpost explains, in 1538 Henry VIII tried to suppress the cult of St Thomas with a Royal Proclamation declaring that ‘henceforth the said Thomas Becket shall not be esteemed, named, reputed and called a saint… and that his images and pictures throughout the whole realm shall be plucked down, and avoided out of all churches, chapels, and other places; and that from henceforth the days used to be festival in his name, shall not be observed, nor the service, office, antiphons, collects, and prayers in his name read, but rased and put out of all the books.' The English carols suffered from this decree: several have been crossed out in their manuscripts, or had the name 'Thomas' scratched out. When the person who wrote the carol 'Saint Thomas honour we' recalled how King Henry had commanded "no prayer for [Becket] should be said", he had no idea that a later King Henry would make the same command; but both carol and images survive all the same. Thomas triumphs.
Posted by Clerk of Oxford at 3:19 pm

I like this, thanks. Am working on a translation of the anonymous Histoire des ducs de Normandie et des rois d'angleterre, which concludes neatly with (sorry!) the translation of Becket's body to the shrine, and am amazed at the guest list. Bishops and archbishops and royals and nobles, including Queen Berengaria. I love the way individuals come hopping out of their pigeonholes.