Anselm and the Owl 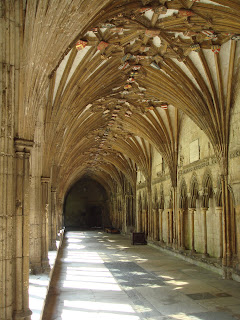 The Life of St Anselm, written by Anselm's close companion and devoted admirer, the Canterbury historian Eadmer, contains many vivid stories about the archbishop: from his childhood visions of God's home in the Alps, to his youthful anxieties about his vocation, to his sympathy for hunted hares and an equally endangered Anglo-Saxon saint, it's full of stories and records of conversations which bring Anselm irresistibly to life. The following episode is perhaps my favourite, a touching story in which Anselm, assailed with the various troubles that come with being an archbishop, laments that he has lost the peace of the cloister. This is something of a trope in the lives of saintly bishops, but it's not difficult to believe it may well have been true of Anselm, who gave up a life of study and contemplation in the abbey at Bec (where he wrote his first philosophical works) to become mired in controversy and political wrangling as Archbishop of Canterbury. The conversation Eadmer describes here probably took place early in his time as archbishop, in the mid-1090s; the king mentioned in this passage is William Rufus.

When Anselm began now to think of all the peace he had lost and all the labour he had found, his spirit was torn and tormented with bitter anguish. For he saw in his mind's eye the life which he had been accustomed to lead as prior and abbot - how joyfully he had reposed and delighted in the love of God and of his neighbour, how devoutly he had been heard by all to whom he ministered the words of life, how still more devoutly his hearers had hastened to put into practice what he taught, and thereby (as he hoped) added to the sum of his reward. And now how different it was! As bishop he ought to have gone on to better things; but he saw his days and nights taken up with secular business; he saw himself unable to devote his attention either to God or to his neighbour in God's name as he had formerly done; and he saw no-one willing to listen to the Word of Life from his lips or to carry it out; and thereby he lost (as he thought) his reward.

To add to these evils of his own, the cruel oppression of his men daily afflicted his ears; and he was deafened by the threats of worse to follow, made by malicious men on all sides. For it was well-known that the king's mind was worked up in a fury against him, and as a result every wicked man thought himself happy if he could hit on any device to exasperate him further. Thus he was tossed by the storms of injuries of many kinds... [Yet he] had some relief from these trials, finding his chief consolation in burying himself in the cloister with the monks and talking to them of things pertaining to their rule of life. 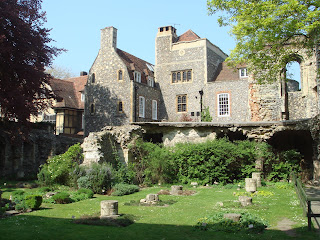 Ruins of the monks' dormitory at Canterbury Cathedral

He referred to this once when he was presiding in their chapter [at Canterbury]. He had as usual been discoursing freely about matters which concerned their rule, and when he came to the end of his discourse he made a joking comparison, saying with cheerful good-humour: "Just as an owl is glad when she is in her hole with her chicks and (in her own fashion) all is well with her; and just as she is attacked and torn to pieces when she is among crows and rooks and other birds, and everything then is far from well with her; so it is with me. For when I am with you, all is well with me, and this is the joy and consolation of my life. But when I am separated from you, and my ways lie among men who are in the world, then I am torn this way and that by the onrush of disputes of many kinds and I am harassed by secular business which I hate. Then indeed I am in an ill state, and I tremble with horror at the great danger to my soul which may ensue."

Although he had begun, as I said, in jest, he broke into most bitter tears as he spoke, adding, "But you at least my friends, do you, at least, take pity on me, for the hand of the Lord is upon me." [Job 19:21]

Since his chief recreation was in such companionship, when he was deprived of it he was grievously afflicted. God knows I often heard him most vehemently protest that he would rather be one of the boys in the monastic community, trembling under the master's rod, than sit aloft in the pontifical throne among the congregration of the people having the pastoral care of the whole of Britain. 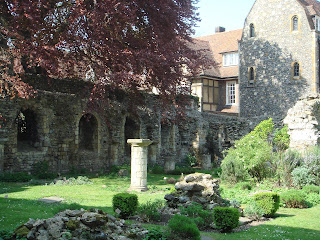 I can't help sympathising with Anselm here, and thinking that his is the lament of many a scholar even today! Anselm's comparison of himself to an owl, like his comments about the hare on this occasion, is based on a traditional medieval interpretation of the animal's characteristics. In bestiaries, drawing ultimately on classical sources, the owl is commonly interpreted in a negative way: as a creature which loves darkness and shuns the daylight it was taken to represent the sinner who rejects the light of righteousness. (This is often a surprise to modern readers, who think of owls as benevolent wise old creatures.) But in literature about the contemplative life, of which Anselm would have been thinking here, the owl was often associated with the monastic vocation: it's a solitary bird, which wakes at night while others sleep, and a verse from Psalm 102, 'I am become like a pelican in the wilderness, and like an owl that is in the desert', is often quoted in reference to the life of the monk who has withdrawn from the world to follow a life of contemplation.

Anselm was particularly fond of the metaphor (which is a Biblical one) of a mother bird surrounded by her chicks - it also appears in one of his letters to Queen Matilda, and in his prayer to St Paul, where it's Christ who is the mother hen and Anselm himself one of the chicks.

In nature owls are apparently often set upon or 'mobbed' by other birds, as Anselm mentions here, and this crops up as a theme in medieval art - for instance, here's a lovely manuscript illustration from a bestiary: 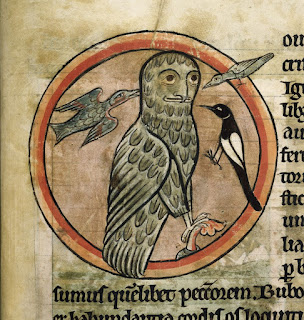 And a misericord from Norwich Cathedral: 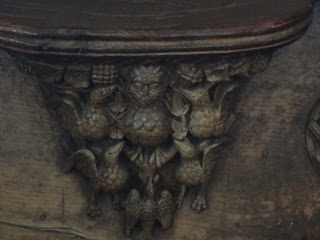 This 'mobbing' is often interpreted in the bestiaries as an allegory for the just hostility of the righteous towards the wicked, but Anselm, following the more positive interpretation of the owl, sees it in terms of the unjust violence of the wicked towards those who have set themselves apart for God. More generally, the little birds tearing away at the poor owl are an effective image of Anselm's worldly cares, those niggling little worries which unsettle the soul and keep it from peace.

In the thirteenth-century English poem The Owl and the Nightingale, the titular birds have a vigorous debate about their good and bad qualities, and the owl seems at times to align herself with the contemplative life: she sings the canonical hours of the monastic day and night, and talks about her love of peace and stability (a particularly Benedictine virtue). At one point she says:

'For this reason [her sharp claws and beak] I am hated by small birds which fly along the ground and in thickets; they shriek and cry out at me and lead flocks against me. It is dear to me to have peace, and sit still within my nest. I would never be any better off if I argued with them, with squabbling and jabbering and with foul words and bad language, like shepherds do. I take no pleasure in arguing with wicked people, and so I stay far away from them.'

Anselm might not have put it quite like this (it would be interesting to know whether schitworde was part of his perhaps-not-extensive English vocabulary), but essentially he said the same thing to the monks of Canterbury. 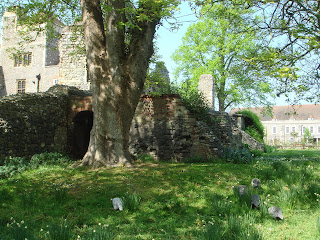 Pheasants wandering among the ruins of the monks' dormitory
Posted by Clerk of Oxford at 12:01 pm