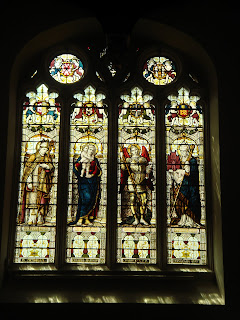 Brasenose chapel; St Chad is on the left

Seventh-century Mercian bishops are not my speciality, but since St Chad, who died on 2 March 672, is one of the patrons of my college chapel, I can never ignore his feast-day.  The wikipedia article about him is surprisingly good, detailed and enlightening on Chad's role in contemporary politics. It also points out the interesting fact that the (Pugin-designed) cathedral of St Chad in Birmingham is in possession of some probably authentic relics of the saint; this makes St Chad one of the few Anglo-Saxon saints whose bones survived the double trial of the Norman Conquest and the Reformation.*

When he had most gloriously governed the church in that province two years and a half, the Divine Providence so ordaining, there came round a season like that of which Ecclesiastes says, "That there is a time to cast stones, and a time to gather them; " for there happened a mortality [i.e. a plague] sent from heaven, which, by means of the death of the flesh, translated the stones of the church from their earthly places to the heavenly building. And when, after many of the church of that most reverend prelate had been taken out of the flesh, his hour also drew near wherein he was to pass out of this world to our Lord, it happened one day that he was in the aforesaid dwelling, with only one brother, called Owin[e]..


* The story of how his bones were rediscovered is wonderful:

At the dissolution of the Shrine on the instructions of King Henry VIII in about 1538, Prebendary Arthur Dudley of Lichfield Cathedral removed and retained some relics, probably a travelling set. These were eventually passed to his nieces, Bridget and Katherine Dudley, of Russells Hall. In 1651, they reappeared when a farmer, Henry Hodgetts of Sedgley, was on his death-bed and kept praying to St Chad. When the priest hearing his last confession, Fr Peter Turner SJ, asked him why he called upon Chad, Henry replied, "because his bones are in the head of my bed". He instructed his wife to give the relics to the priest, whence they found their way to the Seminary at St Omer, in France.

After the conclusion of penal times, in the early 19th century, they found their way into the hands of Sir Thomas Fitzherbert-Brockholes of Aston Hall, near Stone, Staffordshire. When his chapel was cleared after his death, his chaplain, Fr Benjamin Hulme, discovered the box containg the relics, which were examined and presented to Bishop Thomas Walsh, (RC) Vicar Apostolic of the Midland District in 1837 and were enshrined in the new St. Chad's Cathedral, Birmingham, opened in 1841, in a new ark designed by Augustus Pugin.


This started me thinking about the current whereabouts of other Anglo-Saxon saints. While St Chad's is apparently "the only cathedral in England that has the relics of its patron saint enshrined upon its high altar", there are a few other saints whose whereabouts are known: St Cuthbert, after his Viking-impelled wanderings, is at Durham, and Bede and St Oswald (probably) with him (and the Gospel book with which Cuthbert was buried is in the British Library). John of Beverley is still at Beverley; the relics of poor Edward the Martyr are in an Orthodox church in Woking, after a ridiculous yet sad spell in a bank vault.  I think that's it, though (unless anyone knows better?).  As far as I can tell, all the many pre-Conquest saints buried at Canterbury (both at Christ Church and St Augustine's) disappeared at the Reformation, as did the relics of, among others, Edmund of East Anglia at Bury St Edmunds, Æthelthryth at Ely, Margaret of Scotland at Dunfermline, and Edward the Confessor at Westminster. St Dunstan's relics were still at Canterbury in 1508, when his tomb was opened and inspected, but less than a century later they were lost forever. Oswald and Wulfstan are buried somewhere in Worcester Cathedral, but the precise location is unknown. I've written about the particularly unlucky fate of those buried at Winchester before, but St Swithun is not even among the jumble of bones in the mortuary chests; his shrine is empty: 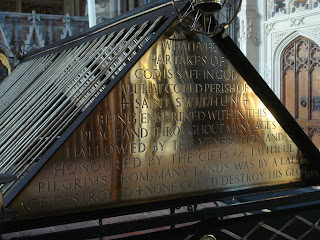 The inscription says 'Whatever partakes of God is safe in God. All that could perish of Saint Swithun, being enshrined within this place and throughout many ages hallowed by the veneration and honoured by the gifts of faithful pilgrims from many lands, was by a later age destroyed. None could destroy his glory.'

Like many people interested in medieval religion, I spend a lot of time tracing the physical location of the relics of saints, as they are moved, stolen, studied, fought over, prayed over, and piously sought.  The importance of saints' relics is, to some people, one of the most alienating differences between the medieval world and our own (although that's a complete illusion, if you ask me). Relics brought tangible benefits for the communities which owned them, and some of the stereotyped ideas about the silliness of late-medieval relic-hunting are of course based on fact; but what comes across far more strongly is the simple human love which relics could inspire. It is impossible to overestimate the deep personal relationship which a medieval religious community could have with its patron saint; they felt for these tombs what people feel for a beloved parent's grave. The combination between that love, and the strong sense of community identity which was bound up with the ownership of relics, and the belief that the saint was still watching over them and protecting them, was incredibly powerful. What would they have thought if they had known that the physical remains in which they invested so much of their love would one day be simply scattered to the winds? They knew, and I know, that we are dust, and to dust we shall return; 'earth goes upon earth as mold upon mold'.  But to think that the relics of St Dunstan, over which Eadmer and the Christ Church monks prayed in the ruins of their burned cathedral in the winter of 1067, are 'loam to stop a beer-barrel' - it's a sobering thought.  At least Chad was luckier.
Posted by Clerk of Oxford at 11:01 am