The Death of St Benedict 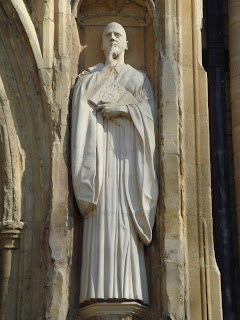 'Benedict, the holy Abbot, on this present day departed from this mortal life to the eternal, which he had thoroughly merited by his holy conduct.'

So begins Ælfric's sermon on the life of St Benedict, and since that's exactly how I would have begun my post, I thought I might as well let him say it (Ælfric would have made a great blogger!). 'This present day', March 21, is indeed the date of the death of St Benedict, the father of Western monasticism. Recently I've been spending a large part of my life with the Benedictine monks of tenth and eleventh century England, and so in honour of today I had a look at Ælfric's sermon, which can be read online here. I've previously posted the extract which deals with Benedict's sister St Scholastica here.

In his homily Ælfric gives a summary account of Benedict's life, based closely on the much longer narrative in Gregory the Great's Dialogues (which you can read here). Although such a faithful translation, Ælfric's sermon is worth reading in its own right - if nothing else, for a few nice points of Old English religious language: for instance, he describes Benedict as Godes dyrling, 'God's darling' (translating 'dilectus Domino'). And I always like to note the appearance of the word leorningcniht, which means 'disciple, boy engaged in study' - this was the usual Old English word used to translate 'disciple', including in translations of the Gospels. It's only an accident of language history that means we don't talk about 'Christ's learning-knights' today. I also like Ælfric's wording of the description of the monastic Rule: he says the Rule was written mid micclum gesceade, mid beorhtre spræce, 'with great power of distinction, with bright language'.

Ælfric expresses his admiration for St Benedict in various places, including in his sermon for New Year's Day, where he gives his opinion that St Benedict's day in March ought to be the first day of the year - since it was the day on which time was created, and "the earth shows by the shoots which are then quickened again that this is the time which should most rightly be the year’s beginning". The importance of St Benedict in Anglo-Saxon England is well illustrated by this depiction of him, from a Psalter produced at Christ Church, Canterbury, between 1012 and 1023 (BL Arundel 155, f. 133). It shows Benedict, enthroned, with an abbot's staff in his hand, and the hand of God descending from above; the inscription around his head reads 'Sanctus Benedictus pater monachorum et dux', 'St Benedict, father and leader of monks'. A monk is holding a copy of St Benedict's Rule, and at his feet another monk - usually identified as the scribe who wrote this manuscript, Eadui Basan - humbly prostrates himself before the saint. 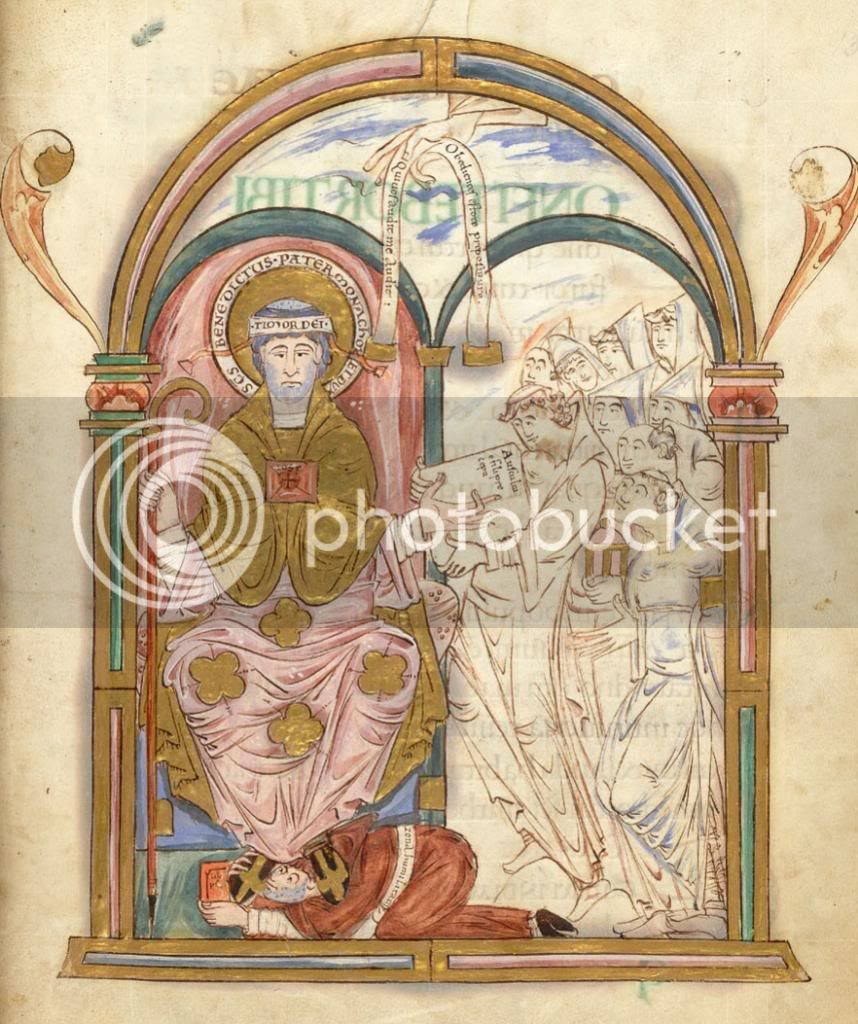 Here's an extract from the end of Ælfric's sermon, telling of Benedict's last miracle and his death:

Another time, the holy man was standing at his prayers on an upper floor, where his bed was. He stood there at a window until far in the night, praying to Almighty God, when suddenly a great light sprang up, brighter than any day, so that the holy man could see across all the world, and he perceived amid the great light the soul of a bishop being led with a company of angels to heaven. His name was Germanus. The saint wanted to have witnesses to that wondrous sight, and he quickly called his deacon to him, and he saw a part of the light. Then the holy man sent a swift messenger to the bishop's city, so that he could find out whether he was alive. The messenger found that he was dead. He asked all about the details of his death, and learned that he departed at that time when the holy Benedict saw his soul carried to heaven.

A wonderful sight, for a mortal man to be able to see across all the world! But when a man sees the light of God, then creation will seem very small, and his soul is spread out within that light, in God, so that it rises above the world and above itself also. What wonder was it that the holy man saw all the world before him, when he was raised up in his mind's light above the world? Truly, the light which he saw outwardly was shining in his mind, and drew up his mind to heaven, and showed him how small all creatures below would appear to him in the immensity of the divine light. 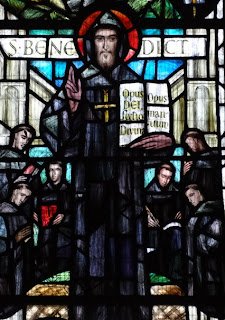 Benedict, in a window celebrating the Benedictine tradition at Norwich Cathedral

This blessed man Benedict wrote the rule of monks with great power of distinction, in lucid language, in which every one may recognise all the acts of his teaching – for the saint lived just as he taught. The blessed man was cheerful in appearance, with white hair, fair in body, and in mind filled with great love, so that he was living in the heavenly realm although he still dwelt on earth. The year that he departed he made known his death in advance to some of his disciples who were living with him, and to some others dwelling in distant places. Seven days before he died he ordered his tomb to be opened, and he was at once greatly afflicted with a severe fever throughout those seven days. On the sixth day of his illness he commanded them to carry him into the church, and there to give him the Eucharist. He then stood between the hands of his brothers, with hands outstretched towards heaven, and between his prayers he breathed out his spirit.

On the same day there appeared to two of his disciples a path from the building in which he died, on the east side, reaching up to heaven. The way was laid with palls and shining with numberless lights. On it there stood a venerable man with bright garments, asking what path it was that they beheld. They said that they did not know. The angel said to them, “This is the path by which God's darling, Benedict, ascended to heaven.” 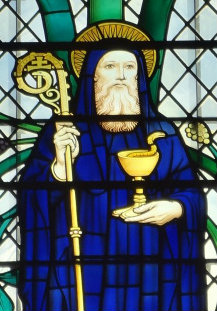 Who in this world can relate all the wonders that the Almighty Creator, through this noble man, has shown to the earth? To Him be glory and praise for ever through eternity with all his saints, who alone is ineffable God. Amen. 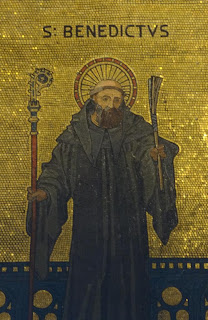