Fordwich: "I feel I've only to turn my head to see them on the road behind me" 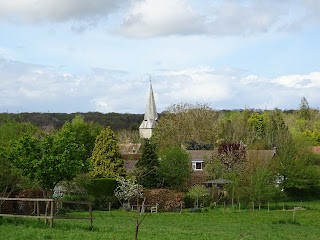 A while ago I posted some extracts from a rather eccentric Victorian history of Fordwich in Kent, A History of the Town and Port of Fordwich, written in 1895 by a clergyman named C. Eveleigh Woodruff. Fordwich is a tiny village now but it's actually a town, the smallest place in England to have a town council, because in the Middle Ages it was the chief port for Canterbury. Well, I should let Mr Woodruff tell it:

The little village of Fordwich is situated on the right bank of the river Stour, about two-and-a-half miles below Canterbury. The excursionist from the Isle of Thanet to the Cathedral city may notice, as he descends the hill from Westbere, a cluster of red-tiled houses, and the neat, broach spire of a church half-a-mile away to the left, but there is nothing to tempt him to inspect more closely what appears to be a commmonplace and not very healthily-situated village; nor would his curiosity meet with much reward should he be induced to linger. Not many of the houses are externally interesting, and the church, though bearing traces of great antiquity, would by the casual observer probably be pronounced rather below than above the standard generally attained in the neighbourhood. The visitor may have been told that the place was once a corporate town and a member of the Cinque Ports’ confederacy; but, without further assistance, he is scarcely likely to identify the humble building of timber and plaster, opposite to the ‘Fordwich Arms’, as the ancient Court Hall, or to suspect that it contains the records of a municipal life extending over more than six hundred years. Nevertheless such is the case; and the town, in spite of its complete insignificance in the present day, possesses a history of exceptional interest.


It really does; and this book is that delightfully Victorian thing, a mixture of sound scholarship and quirky, irrelevant facts. The author consulted the archives of Fordwich, which provide a fascinating picture of a medieval town's self-regulation; but he also feels able to note at one point, describing an ancient house in the village, that "in summer time this garden is well worth a visit, for it contains a very choice collection of old-fashioned flowers". Now that's useful scholarship.

I posted some of Woodruff's extracts from the archives about trouble between vicar and parishioners, and here are a few more passages which amused me - with pictures of said 'commonplace and not very healthily-situated village' and its church. 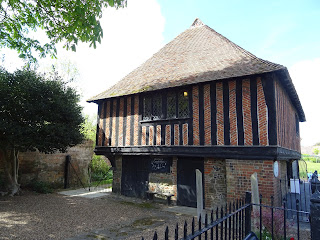 This is the tiny Town Hall, built in 1544. It's said to be the oldest and the smallest still in use. Like Chilham and Wickhambreaux, Fordwich was used as a location in the 1944 Powell and Pressburger film A Canterbury Tale, going to make up the fictional village of Chillingbourne, one train-stop west of Canterbury (the site of Chilham; Fordwich is the same distance away, but to the east). A Canterbury Tale is the oddest but loveliest of films, a wartime love-letter to 'deep England' - to history and the English land, and all its odd quirks and all the odd, ordinary, but glorious people who have made its story. It's an eccentric but deeply heartfelt response to Chaucer's poem, opening with the jolly pilgrims of his Canterbury pilgrimage, but turning with a jolt to modern warplanes in the skies above Kent, tanks lumbering through rural lanes. The pilgrims in this film are from the twentieth century, brought to Canterbury because of a world torn apart by war: a land-girl mourning the loss of her fiance, a British soldier about to be sent overseas, and a homesick American GI. They're brave, clever, confident young people, but at heart they are all, even if they don't know it, pilgrims in search of blessings, and they have an urgent, painful need Chaucer's pilgrims never manifest - aching grief, longing for a distant home, lost idealism and hope. This film is actually more interested in and engaged with the idea of pilgrimage than The Canterbury Tales is, and with the image of Canterbury (which Chaucer's pilgrims never reach) as England's holy city, the place where all roads lead. The plot really makes no sense at all, but the feeling in this film is utterly heartbreaking.

Anyway, you can see a loving recreation of the town hall's upper chamber in the film, from about 13.00 onwards (not the real thing - I should think the real town hall was too small to film in!). The lower floor is occupied by a tiny jail cell, of which Woodruff observes:

During the present century, this place of detention has been very sparingly used. At the time of the inquiry held by the Commissioners, in 1835, so seldom had his services been required, that the old gaoler was not aware that he had been removed from office and another person appointed in his stead. 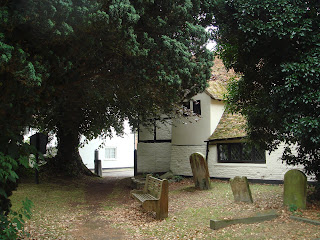 Some local laws could be eccentric. This was their way of settling disputes about property boundaries:

The claimant or defendant as they shall agree, shall place his right foot so that his great toe shall extend to the extremity of the land which he claims, and he shall put his foot to the wall if he claim the wall, and shall say: "Hear this ye good men and show J or W my opponent that all the land which I measure with my foot is mine, so help me all Holy Saints," and this custom is called Feche and Have. 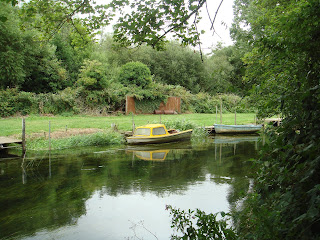 You see how sleepy and full of weeds the River Stour is now, as it is in Canterbury too - a dreamy quiet river. But all the stone to build Canterbury Cathedral was landed here when it was brought across the Channel from Normandy. It had other practical uses too:

If a stranger appear as a prosecutor accusing a man of [the town] of felony whether committed within or without the [jurisdiction of the town] the prosecutor shall come to the boundary fully equipped as is fit for a prosecutor to be. Then when he comes to the town he shall be led to a certain running water called ‘Stour’, and in that water he shall stand up to his navel with all his equipment prepared to prove his appeal. Then the accused shall come in a boat with three poles to oppose the prosecutor clothed in a garment called ‘a storrie’ with an instrument called ‘an ore’ three yards long and the boat shall be made fast to the quay by a cord and he shall fight with the said prosecutor until the duel between them is decided.


That conjures up some amusing images... When it comes to the church, Woodruff is of the opinion that "the present east window is a wretched modern contrivance". The parish appears to have agreed with him, because it was replaced by this beautiful east window which bears the date 1931: 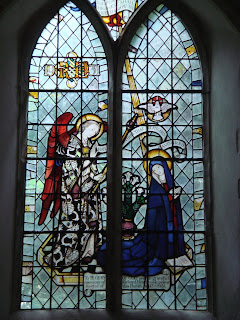 The Norman church has some interesting features, especially this stone: 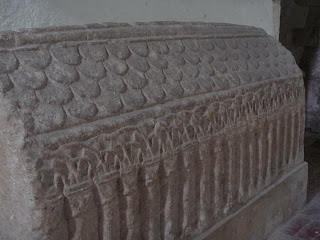 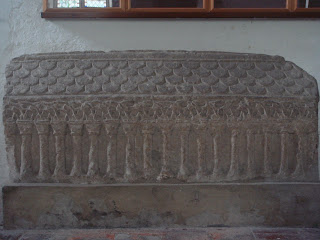 It's a block of limestone which legend says was the resting-place of the relics of St Augustine of Canterbury. The carving has been dated to the twelfth century and the whole thing is not unlike the kind of monument used to mark the place of a high-status burial; so perhaps it really was associated with St Augustine (the site of whose tomb is visible among the ruins of St Augustine's abbey in Canterbury) or with another of the Canterbury saints whose relics were lost at the Reformation. A similar claim to be St Augustine's resting-place is made of an (empty) tomb now in Chilham church - they can't both be right, but I suppose we might easily imagine such things being moved from Canterbury to local churches for safe-keeping, their original significance being forgotten. Fordwich belonged to St Augustine's abbey in the medieval period, and it's not difficult to see how a 'saint's tomb from St Augustine's' might become 'St Augustine's tomb' in local legend. 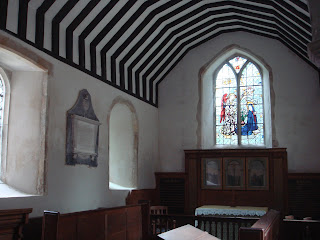 There's some gorgeous medieval glass in the church too: 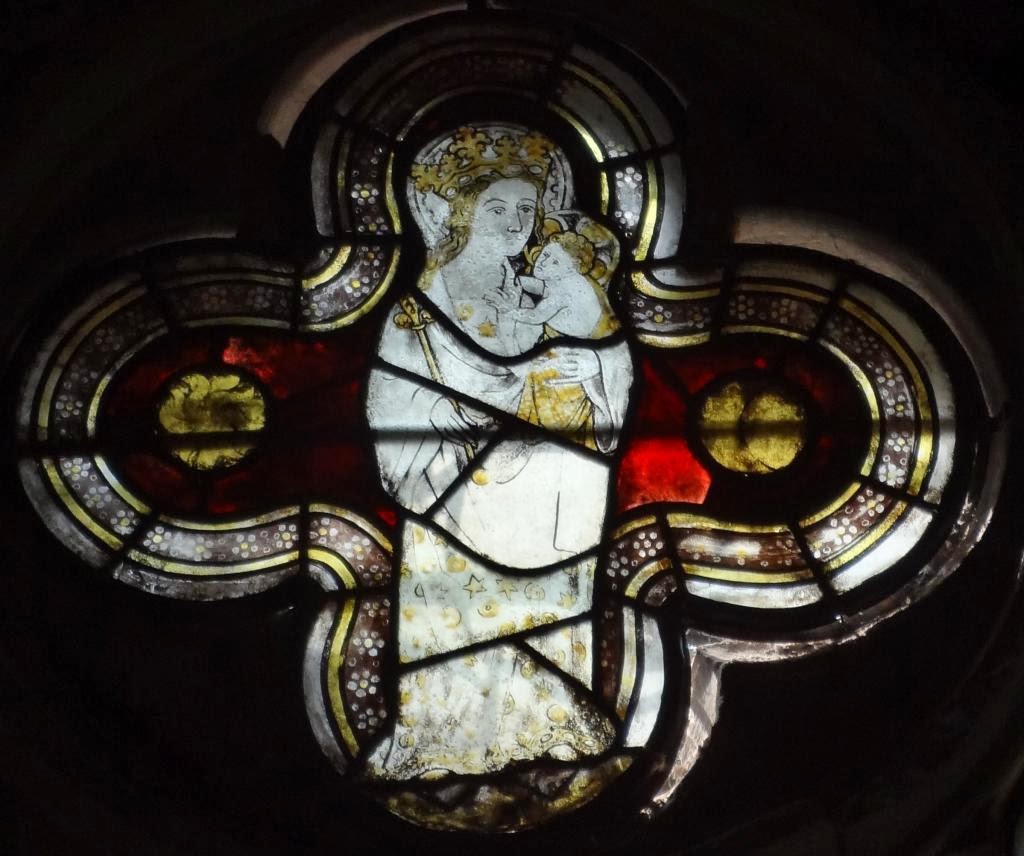 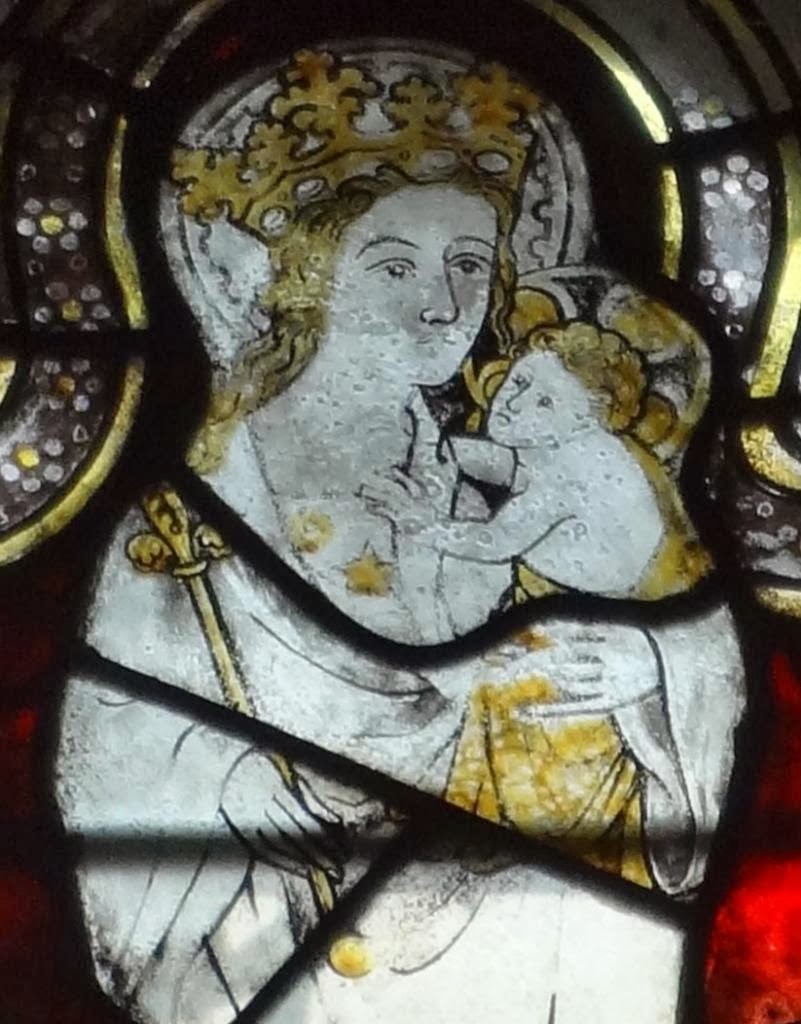 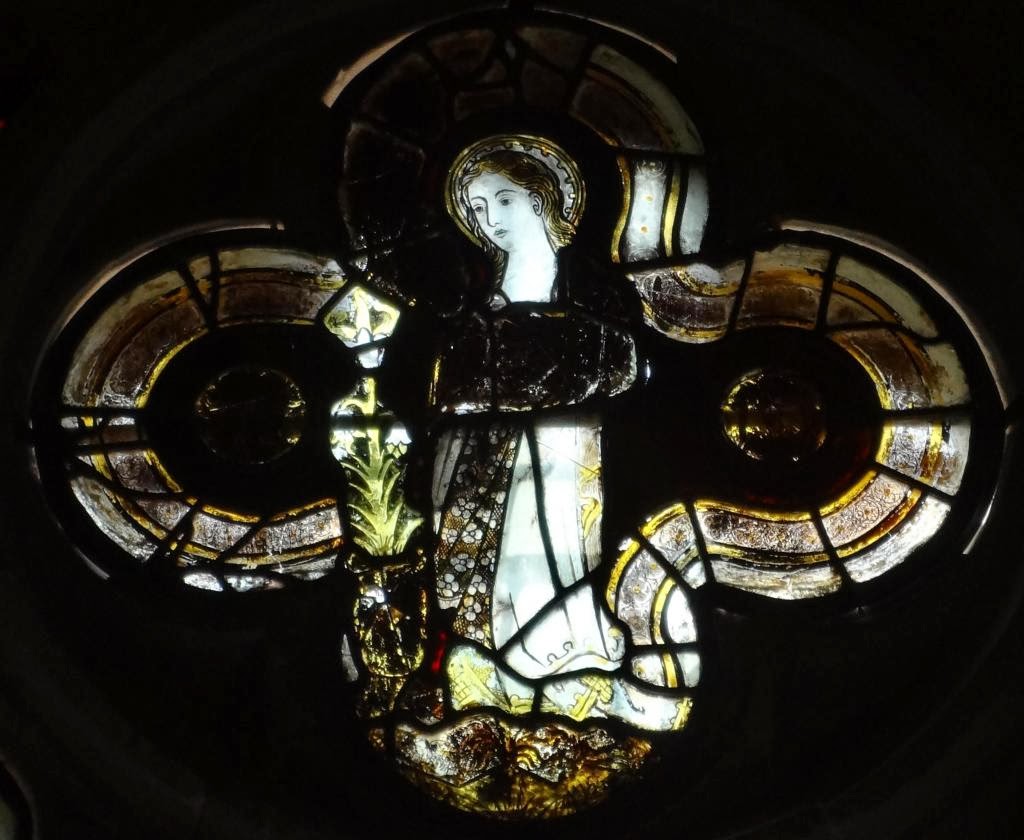 This seems to be the remains of an Annunciation scene (note the lily). And this is the Coronation of the Virgin, in two facing lights: 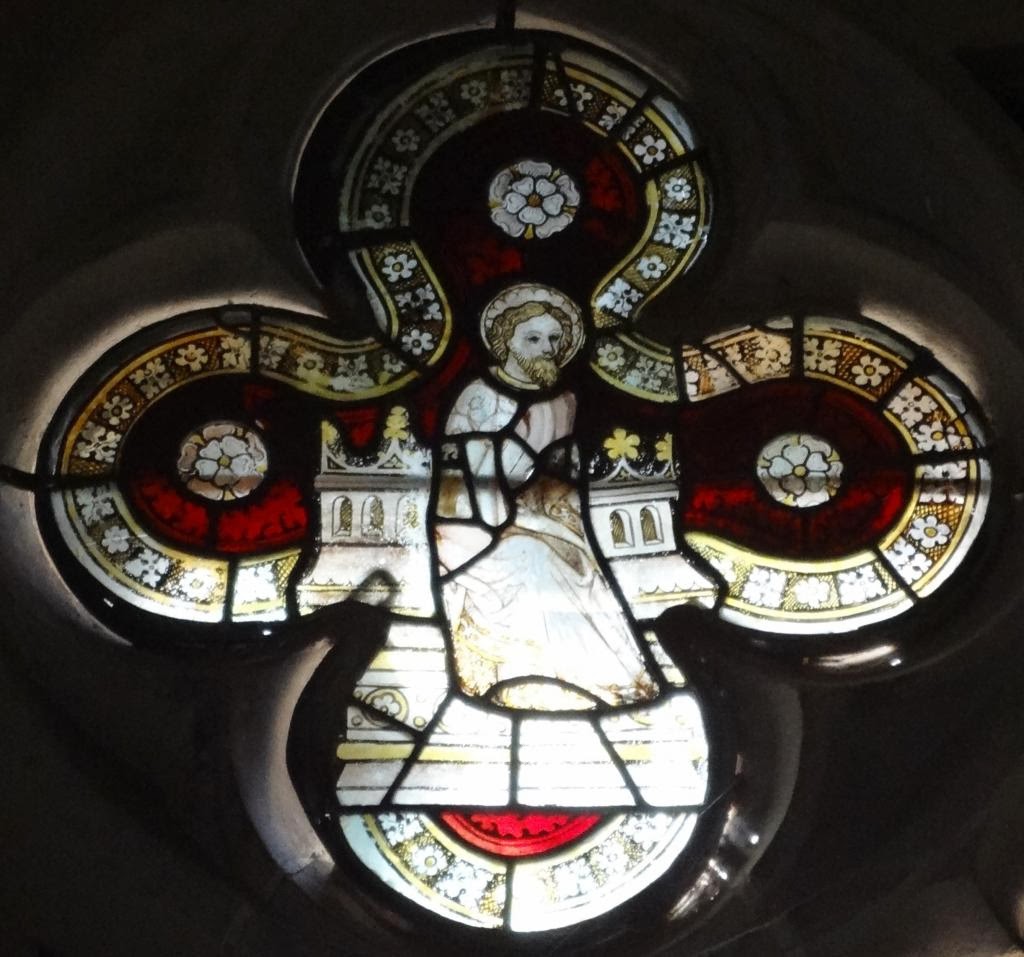 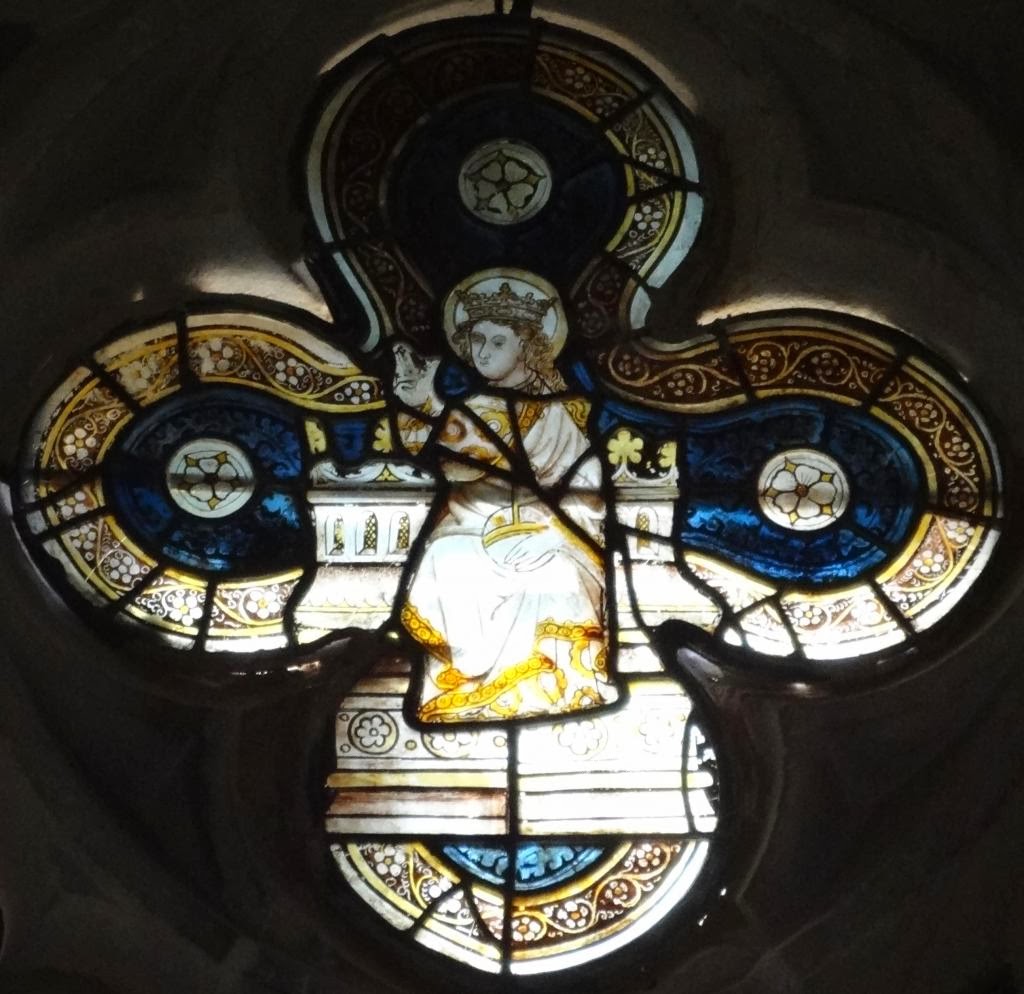 And a pair of evangelists in blue and white: 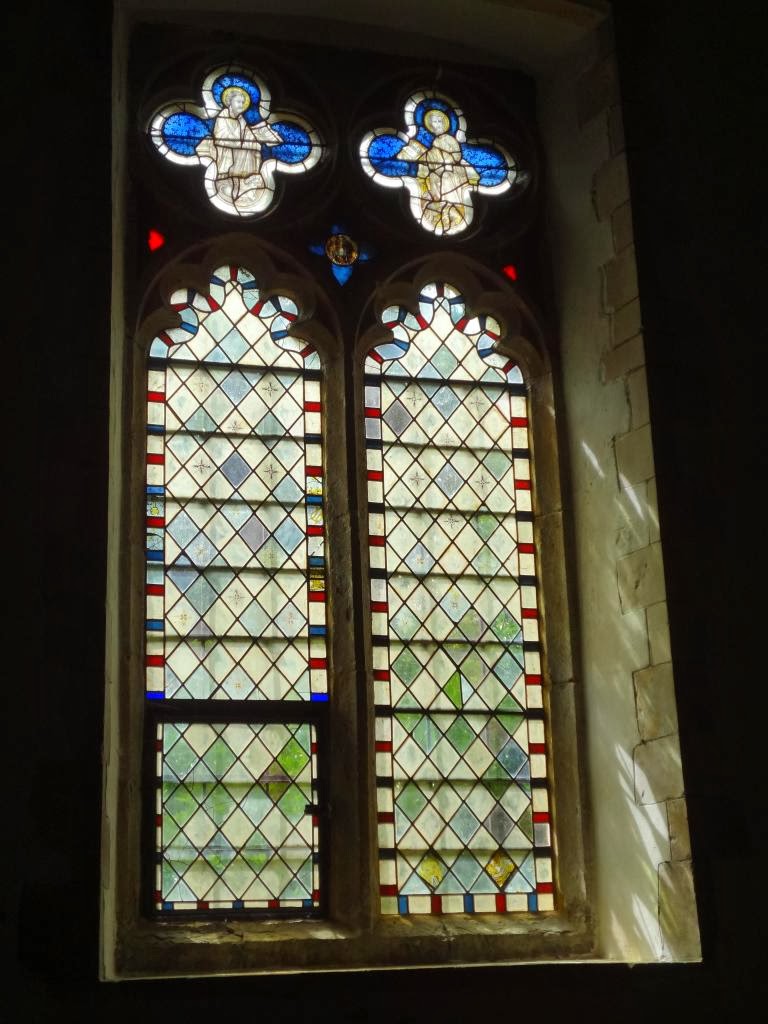 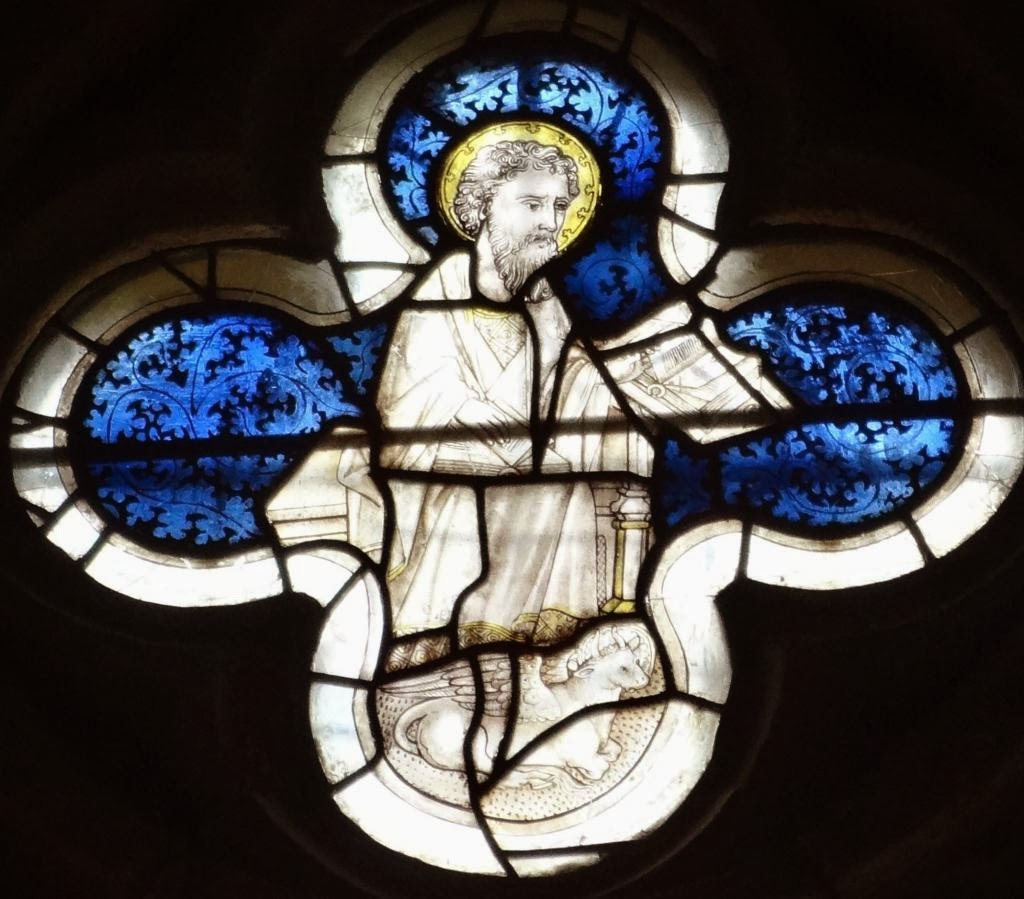 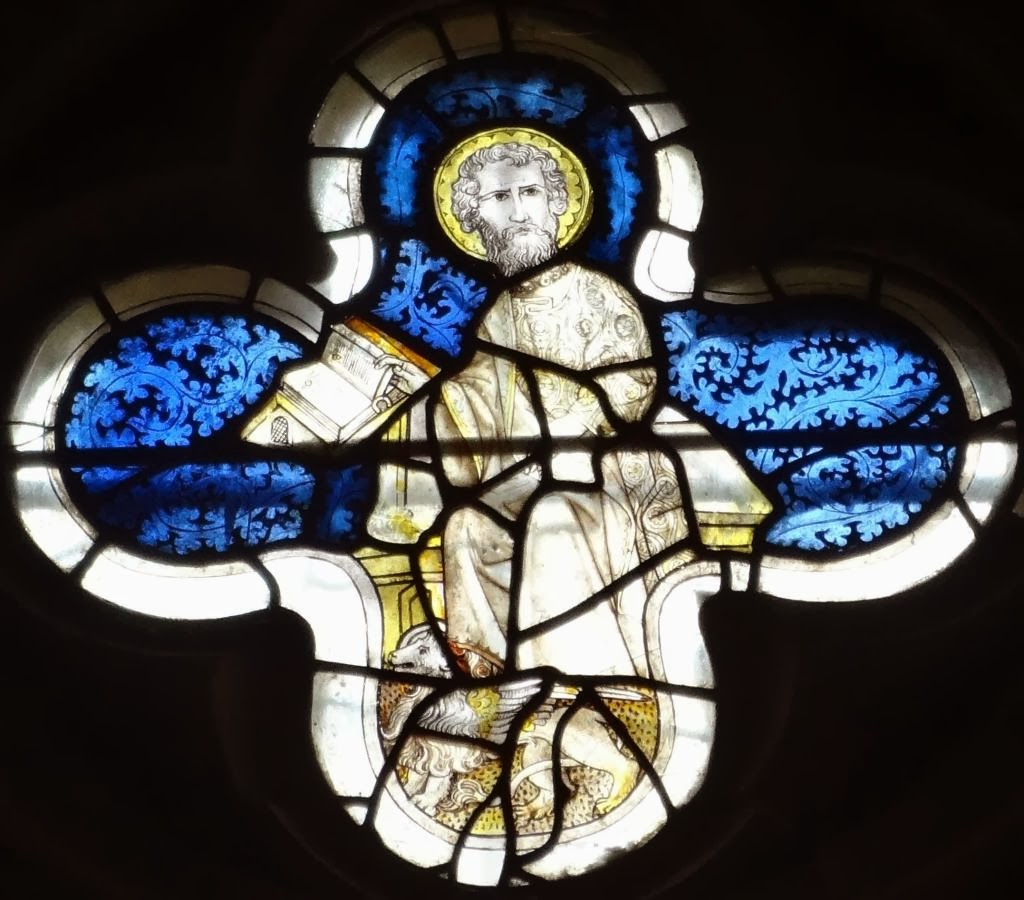 And a fierce little lion: 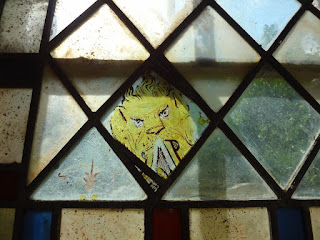 Thinking of Mr Colpeper, I was pleased to see memorials to local magistrates in the church, especially this one to Friend Tomlin, who died in 1819 - 'senior jurat of this town' and father of its then mayor. 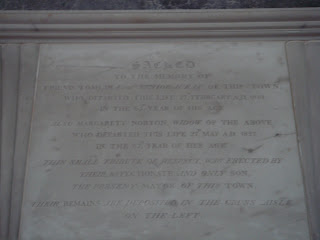 I wonder what he would have said to a GI, an organist and a land-girl if they came in search of blessings.
Posted by Clerk of Oxford at 10:35 am