Daffodils and Anchorites, Iffley and the Splendour of Light

Chaucer was right: when spring comes, 'then longen folk to go on pilgrimages'. It isn't April yet, but we're having what they call a forward spring, and the young sun and Zephyrus' sweet breath impelled me forth into the open air yesterday. And where to go on a pilgrimage within walking distance of Oxford city centre? Iffley church, I decided. I've lived in Oxford for seven years, but I've never been to Iffley church, having somehow missed the fact that it's both historically interesting and extraordinarily beautiful. Canterbury would of course always be my first choice for a pilgrimage, but Iffley is a good substitute. 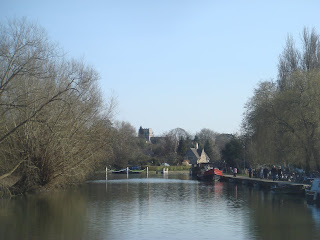 So, having decided on Iffley, I set off along the river. It was sunny with the cold sun of early spring, with almost too much light to be comfortable. There were lots of people around - cycling, walking their dogs, rowing (well, this is Oxford). And there was blossom on the trees, and lots of it: 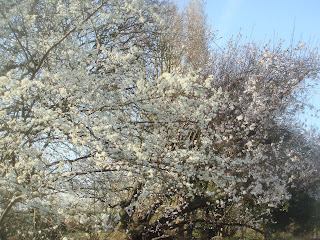 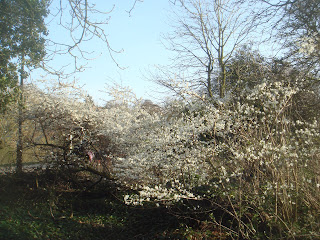 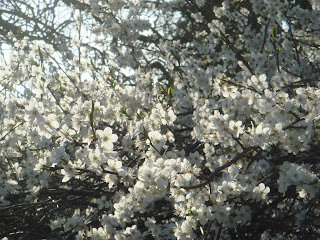 The small birds were making melody very loudly, almost drowning out the ever-present sound of traffic. 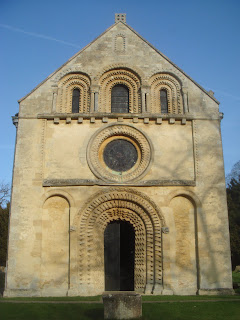 Iffley is the kind of church you have to see to believe in. It was built in 1170, at the expense of the local Norman lord of the manor, and in grand style. The outside is covered with Romanesque carving, roughly contemporary with my Kentish favourites at Barfreston and the Bournes, but preserved with a crispness even those two lack; these could have been carved yesterday: 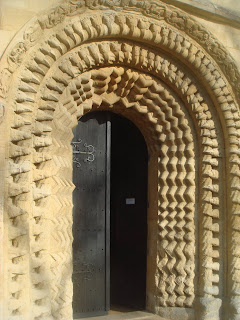 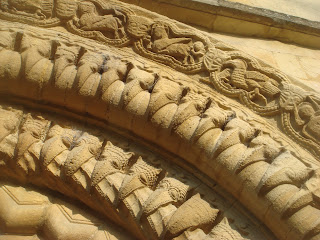 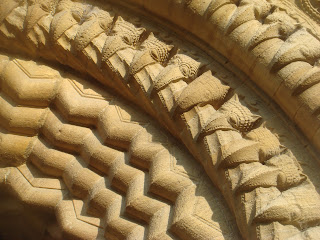 The church itself is unusually long and narrow, since when the original building needed to be extended, previous generations decided to build forwards rather than sideways (I seem to recall the church guide said something about structural reasons for this). And so when you tear yourself away from the carving and peer in, you see something like a long, dark corridor, with light glinting off the altar-cross at the very end: 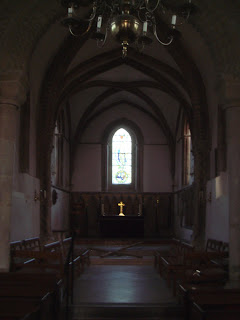 I was there at about half past three in the afternoon, so the sun was declining a little in the west; it was behind the west window so brightly that there was too much light for my camera: 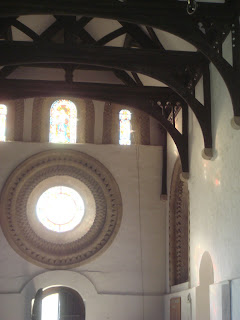 But if one is prepared to wait a little, the sun always moves in the end; then the west window looks like this: 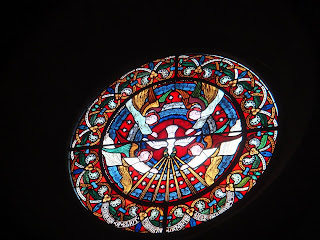 All the stained glass is delightful; there are two especially good modern windows, including this one by John Piper: 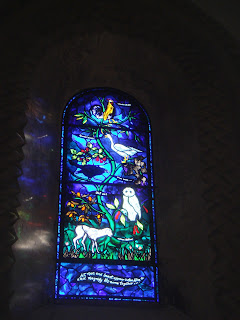 This was installed in 1995 and is based on a story which is most familiar to me as the subject of Charles Causley's The Animals' Carol - a Latin dialogue between various animals at the time of Christ's birth. "Christus natus est," crows the cock; "Quando? Quando?" quacks the goose; "In hac nocte," croaks the raven; "Ubi? Ubi?" asks the owl; and the lamb bleats, "In Bethlehem." You can read Causley's version of the story (which is longer, and matches up animals and words rather differently) here. My mother loved this book when I was a little girl, and taught me to love it; I used to go around chanting, "Cui? cui? rings the chough, On the strong, sea-haunted bluff" without having the slightest idea what a chough was. Anyway, for that reason I was very happy to see this window.

The other window is equally beautiful, and all the more so because I had seen so much blossom on my walk along the river: 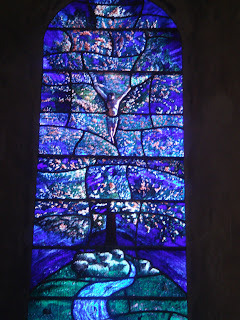 This is even newer than the Piper window - just a few years old, I think, and so new that the parish website makes no mention of it. But a blossoming crucifix is one of my favourite things, and this one is gorgeous.

I don't know if it was because these windows are so lovely or because the body of the church was so dark, but I was very conscious of how the light was falling. I took lots and lots of pictures like this, of the coloured light thrown by the west windows: 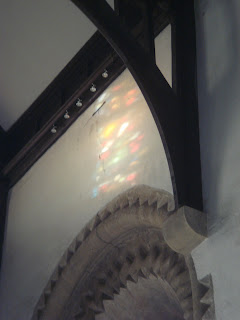 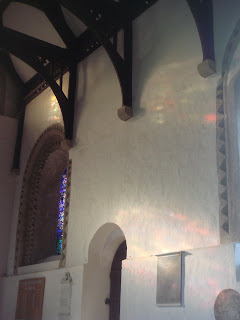 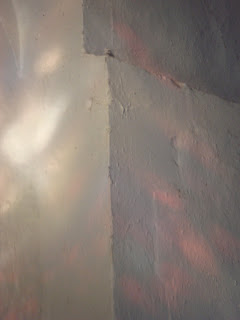 Even the windows which were less beautiful in themselves had a kind of glory to them, as if they had extra power of trapping light. 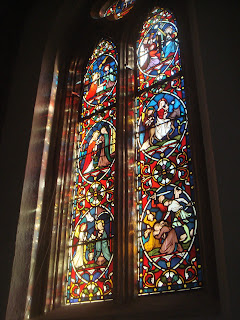 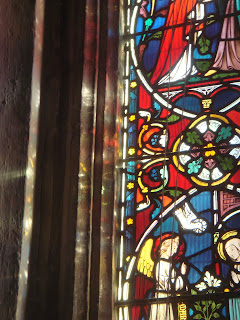 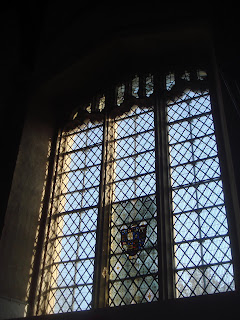 I lingered in the empty church for a long time, taking photographs, and thinking, and reading a bit of St Anselm's prayer to St Mary (this is St Mary's church). Then I went outside to study some more of the carving: 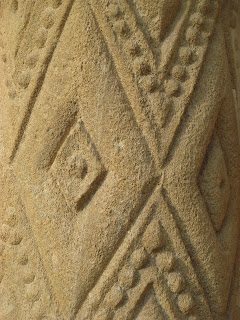 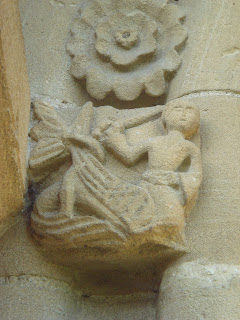 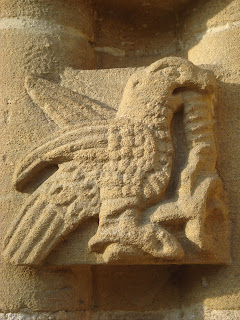 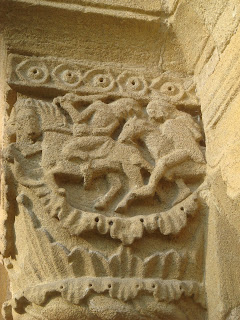 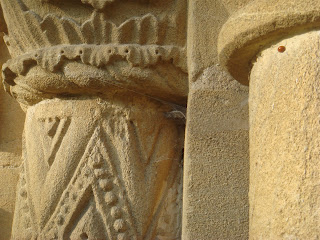 I was particularly fond of this collection - a ladybird, a cobweb, and Norman carving. To see such fragile transient things wandering freely across a stone that has looked exactly the same for eight hundred years, as sharp as when its carver set down his tools - at such moments, time is nothing at all. 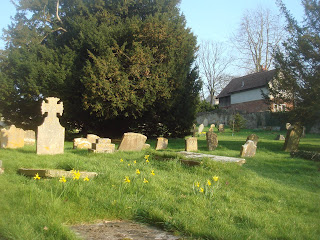 The churchyard was full of daffodils, a different kind of gold to the honey colour of the stone, or the chilly splendour of the sunlight. 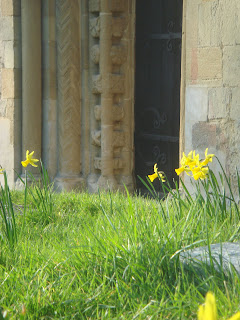 This is the site of one of Iffley's unusual features, the remains of an anchorite's cell: 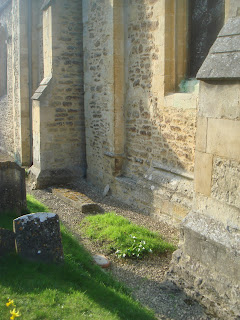 The anchoress who lived here was called Annora. I wonder if there were daffodils in her day.

When I at last thought it was time to return home, I walked back a little way through Iffley village, which is so golden-stone-and-thatched-cottagey that it's hard to believe we're so close to busy Oxford: 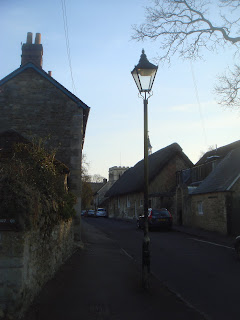 I cheated by getting the bus back into town (don't tell me Chaucer's pilgrims wouldn't have done that if they had the chance) and as I arrived in the High, the sun was beginning to set. 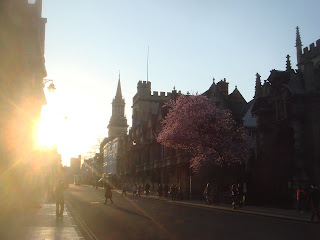 Then I went to Evensong at Christ Church, and by the time I left it was almost dark and the stars were out - the brightest stars I've seen in a long time. It was Venus and Jupiter, together in the western sky above Tom Tower. At Evensong we sang 'Immortal, invisible':

Immortal, invisible, God only wise,
In light inaccessible hid from our eyes,
Most blessed, most glorious, the Ancient of Days,
Almighty, victorious, thy great Name we praise.

Unresting, unhasting, and silent as light,
Nor wanting, nor wasting, thou rulest in might;
Thy justice like mountains high soaring above
Thy clouds which are fountains of goodness and love.

To all life thou givest—to both great and small;
In all life thou livest, the true life of all;
We blossom and flourish as leaves on the tree,
And wither and perish—but naught changeth thee.

Great Father of glory, pure Father of light,
Thine angels adore thee, all veiling their sight;
All laud we would render: O help us to see
’Tis only the splendour of light hideth thee.


After the daffodils, I could only think of 'flowers that glide' at the third verse; but at the fourth I thought of the light which was with me in Iffley church, the light too bright to be captured by a little camera, and I thought - maybe.
Posted by Clerk of Oxford at 8:23 pm