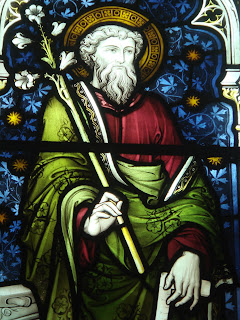 St Joseph, from the church of All Saints, Freshwater, Isle of Wight


Last year on St Joseph's day I posted one of the many 'doubting Joseph' folk carols, and here are two more related-but-distinct examples from that popular genre. The number of surviving versions of the theme (in which we have to include the Coventry Mystery plays) attests to the fact that it was of widespread interest at least from the fifteenth century onwards. The Cherry Tree Carol is probably the most famous song in this sub-genre, and there are approximately ten million versions of it on youtube, choral and folky and everything in between. In terms of measuring the popularity of a song, the number of youtube iterations is the modern equivalent of the number of surviving broadsides or manuscripts! This is one I especially like:

(If you like that, have a look at Kerfuffle's 2009 album 'Lighten the Dark: A Midwinter Album', which has equally lovely versions of other traditional carols).

This is a good resource on the history of the Cherry Tree Carol, which also quotes the relevant dialogue from the Coventry Mysteries. I don't really have anything to add, except that some versions of the Cherry Tree Carol end with dialogue between Mary and the infant Christ which it's interesting to compare to more extended medieval treatments of the same scene, like this or this. I said in the first of those posts that "The idea of a baby who is childish enough to insist on being sung to, but who can yet predict his own life and death, seems to get right to the heart of the mystery of the Incarnation", and while that's in one way an absurdly bold statement (for which I apologise!) it is also true of the 'doubting Joseph' songs, which have the same homely-yet-profound approach to the mystery of the Virgin Birth. This is a concept which people today have a hard time grasping, and I'd venture this has probably always been the case; part of the appeal of songs like the Cherry Tree Carol is that through focusing on the very human figure of Joseph, they approach this difficult idea in domesticated, familiarised terms.

Speaking of domesticating the Holy Family, the carol I really want to post for St Joseph's day is less well-known than the Cherry Tree Carol, at least judging from the fact that I could only find one version on youtube:

This is a carol essentially constructed by Vaughan Williams, in that both tune and words are traditional, but he put them together and omitted ten of the original sixteen verses. The tune was collected at Weobley at Herefordshire, a pretty village which I visited a few years ago: 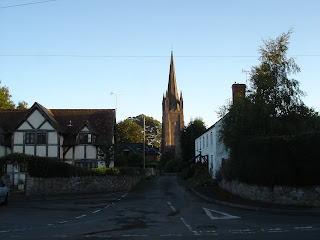 The words sung to this tune by Mrs Esther Smith at Weobley were, in Vaughan Williams' opinion, "full of the rather unpleasant imagery which is characteristic of much of the eighteenth-century evangelistic verse" (they were 'There is a fountain'), and so as not to waste the tune he replaced them with the much nicer 'Joseph and Mary' verses, a selection from this text (I think verse 10 is my favourite!):


1. Joseph being an aged man truly,
He married a Virgin fair and free,
A purer Virgin could no man see
Than he chose for his wife and dearest dear.

2. The Virgin was pure there was no nay,
The Angel Gabriel to her did say,
"Thou shalt conceive a Child this day,
The which shall be our dearest dear."

3. The Angel no sooner this message said
But all in his heart she was afraid;
"How may this be, and I a pure maid?
Say then to me, my dearest dear."

4. "The Holy Ghost, Mary, shall come unto thee,
The power of it shall overshadow thee,
And thou shalt bear a Son truly,
The which shall be our dearest dear."

5. Joseph being a perfect mild man,
Perceiving that Mary with child was gone,
Said, "Tell to me, Mary, and do not frown,
Who hath done this, my dearest dear?"

6. Then answered Mary meek and mild:
"I know no Father unto my Child
But the Holy Ghost, and I undefiled,
That hath done this, my dearest dear."

7. But Joseph thinking her most unjust,
Yielding her body to unlawful lust,
Out of his house he thought for to thrust
His own true love, his dearest dear.

8. But whilst in heart he thought the same,
The Angel Gabriel to him came,
As he lay sleeping on a frame,
Still dreaming on his dearest dear.

10. When Joseph arose from his sleep so sound,
His love to Mary did more abound,
He would not for ten thousand pound
Forsake his love and dearest dear.

11. They lived both in joy and bliss,
But now a strict commandment is,
In Jewry land no man should miss
To go along with his dearest dear,

12. Unto the place where he was born,
Unto the Emperor to be sworn,
To pay a tribute that is duly known,
Both for himself and his dearest dear.

13. And when they were to Bethlehem come,
The inns were filled both all and some,
For Joseph entreated them every one,
But could get no bed for his dearest dear.

14. Then were they constrained presently
Within a stable all night to lie,
Where they did oxen and asses tie
With his true love and his dearest dear.

15. The Virgin pure thought it no scorn
To lie in such a place forlorn,
But against the next morning our Saviour was born,
Even Jesus Christ, our dearest dear.

16. The King of all power in Bethlehem born,
Who wore for our sakes a crown of thorn;
Then God preserve us both even and morn,
For Jesus' sake, our dearest dear. 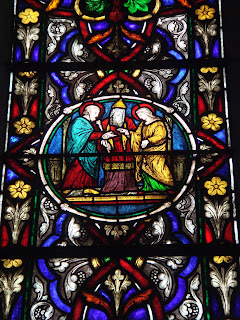 The wedding of Mary and Joseph, from (The Beheading of) St John the Baptist, Doddington
Posted by Clerk of Oxford at 11:53 am