St Felix, the Suffolk Lyonesse, and the Ramsey Relic Race 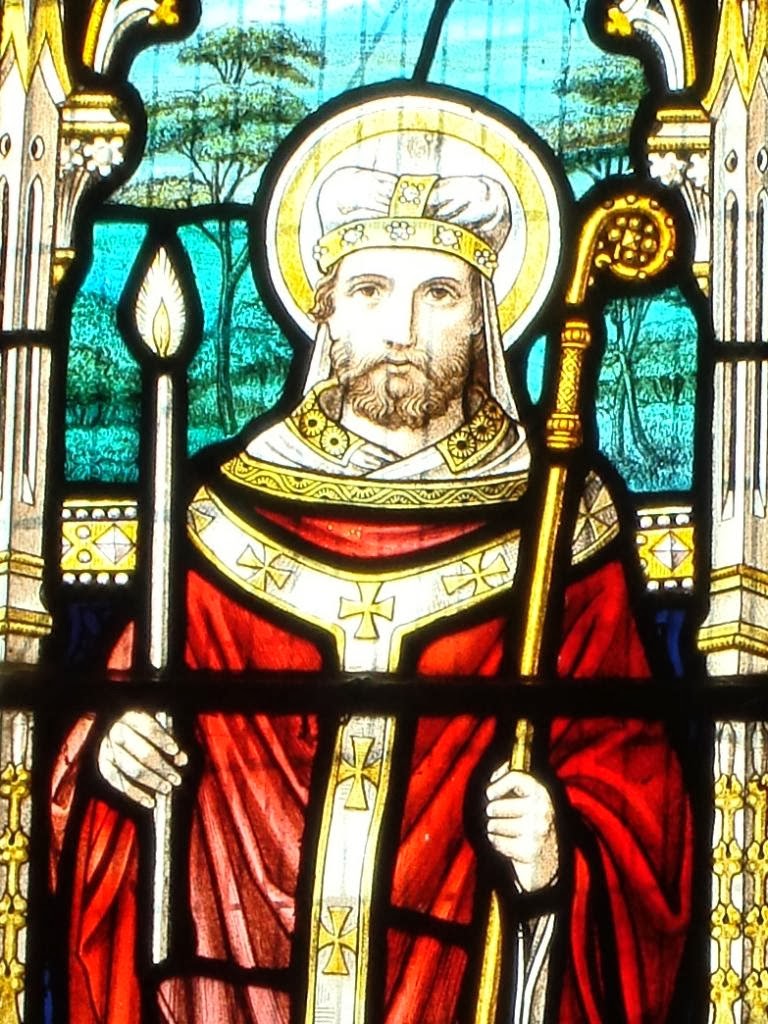 Today is the feast of St Felix, who according to Bede introduced Christianity to the kingdom of East Anglia in the first half of the seventh century. Working with the aid of the ill-fated King Sigeberht, he established churches, a school, and an episcopal see at a place called Dommoc (perhaps to be identified with the town of Dunwich, which has since disappeared almost entirely into the sea). Felix had help from the newly-founded church of Canterbury, and was consecrated as bishop by Honorius, the last surviving member of the Gregorian mission to England; he then proceeded to spread Christianity in the world of Sutton Hoo. Bede, in etymological mood, tells us (in Historia Ecclesiastica, II.15):

Bishop Felix... came to Archbishop Honorius from the Burgundian region, where he had been raised and ordained, and, by his own desire, was sent by him to preach the word of life to the nation of the Angles. Nor did he fail in his purpose; for, like a good farmer, he reaped a rich harvest of believers. In accord with the meaning of his own name, he freed the whole province from its ancient iniquity and infelicity (infelicitate), brought it to the faith and works of righteousness, and guided it to eternal felicity (perpetuae felicitatis). 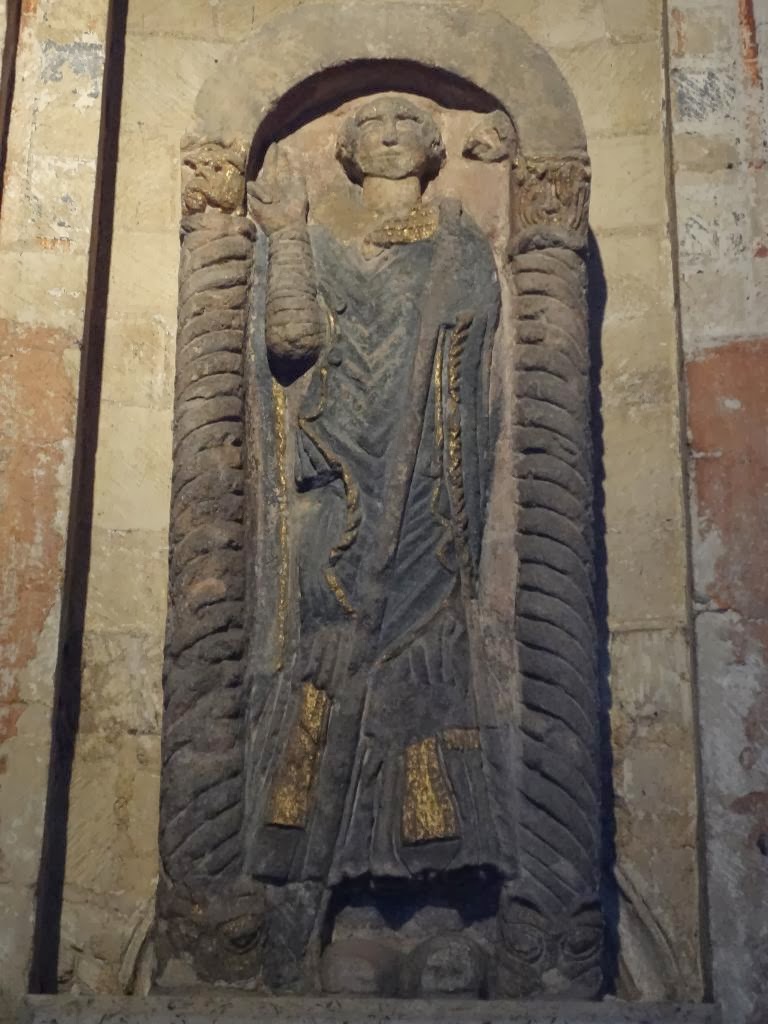 Felix was bishop for seventeen years, until his death on 8 March 647/8. His relics were preserved at Soham, but the shrine and community there were destroyed in the ninth century by a Viking raid. In the eleventh century Cnut gave permission for the monks of Ramsey Abbey to take possession of Felix's relics (as king of England Cnut was involved in a number of such events, probably as a strategic form of reparation to the English church for Viking attacks). There's a memorable story in Ramsey's own chronicle, the Chronicon Abbatiae Ramesiensis, which claims that when the Ramsey monks were sailing home with Felix's relics through the Fens they were pursued by the monks of Ely, also in a boat, eager to have the precious relics themselves. A miraculous fog descended, in which the Ely monks lost their way, and our Ramsey heroes were able to escape with the relics. Rivalry between Ramsey and Ely, two great Fenland monasteries, is a regular feature of their medieval history, and since Soham is closer to Ely than it is to Ramsey you can see why the Ely monks might feel a little aggrieved! It's a great story (though generically typical), but even the Ramsey chronicler who records it expresses doubts about its veracity - with engaging frankness, he says 'the reader is not required to believe the story, provided that he feels it to be certain that every part of the relics of St Felix were translated to the Church of Ramsey, and honourably deposited there'. As indeed there's no reason to doubt. 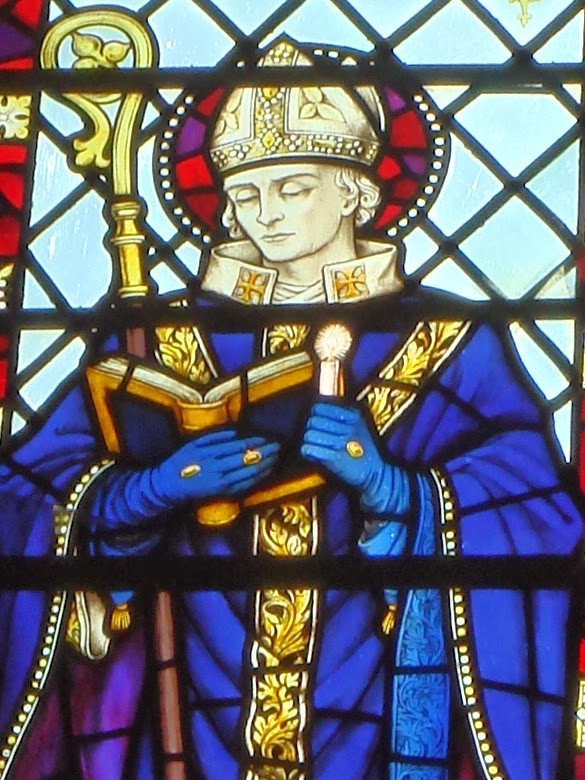 I was in Suffolk last spring, and visited Dunwich, which was then full of daffodils: 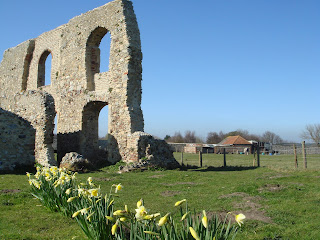 These are the ruins of the thirteenth-century priory of Greyfriars, the only part of the medieval town which survives. Coastal erosion has encroached on everything else that remains of what was once a substantial settlement. It's still going on at a fast rate - Wikipedia has a fantastically evocative list of the buildings which have been swallowed by the sea, including a picture of a church which was standing in 1904 and is now lost except for one single gravestone. The cliffs are getting ever closer to Greyfriars; it may not be long before this too is gone. 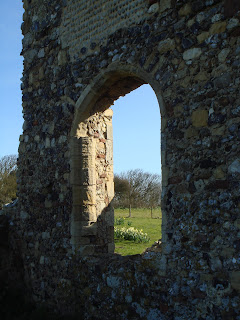 Sunken villages have such romantic appeal! Apparently local legend claims that at certain times and tides the church bells of Dunwich can still be heard ringing beneath the waves. A similar belief is common to myths of such places all over the world - the past echoing through the present. 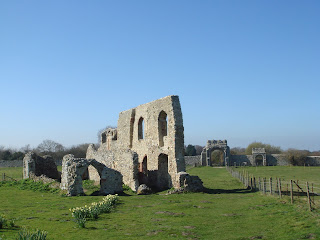 Read more about 'Britain's Atlantis' here.
Posted by Clerk of Oxford at 3:37 pm