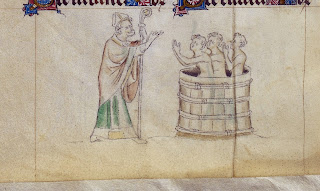 St Nicholas was a very popular saint in the Middle Ages, and with all the colourful stories about him, it's not difficult to see why. There are several vernacular carols and poems in his honour from medieval England, and in fact one of the very earliest surviving English songs is a prayer to St Nicholas (one of the songs of Godric of Finchale, who died in 1170):

You can listen to Godric's song here. 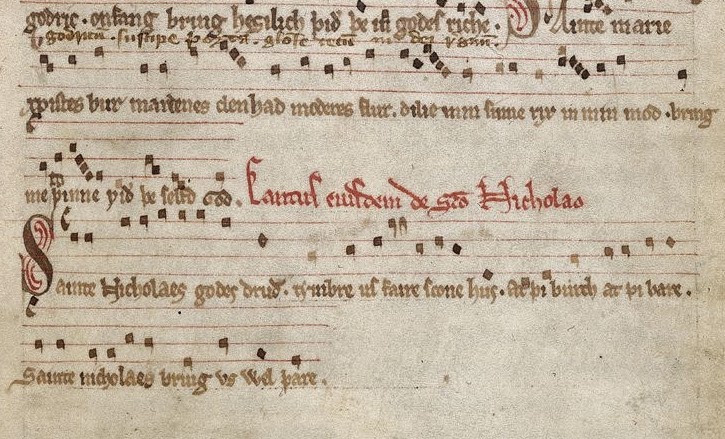 And here are two later carols, which are both from the manuscript BL Sloane 2953 (c.1400) - an important manuscript of carols which also contains 'Lullay myn lykyng', 'Adam lay ybounden', and 'I sing of a maiden' among many others.

The first carol is straightforward enough, and just recounts Nicholas' most famous miracles; the rescue of the 'clerks' from the butcher's barrel is frequently depicted, as you can see from the images in this post. The other carol focuses on one miracle, the saving of three girls from prostitution - not by throwing money through the window, as usually told, but by promising them nice husbands! However, it ends abruptly and perhaps the end of it has been lost; I'll post both, and you can make of them what you will.

Make ye merry, as ye may,
And syng with me, I you pray.

In Patras ther born he was,
The holy buschop Seynt Nycholas,
He wyst mekyl of Godes gras,
Throw vertu of the Trinite.

He maryid thre maydenys of myld mod;
He yaf hem gold to here fod,
He turnyd hem from ille to good,
Throw vertu of the Trynyte.

Another he dede sykerly:
He savyd a thef that was full sly,
That stal a swyn out of his sty;
His lyf thann savyd he.

God grawnt vs grace here, eld and yyng,
Hym to serve at his plesyng;
To hevene blysse he us bryng,
Throw vertu of the Trinite.

Make ye merry, as ye may,
And sing with me, I you pray.

In Patara there born he was,
The holy bishop Saint Nicholas;
He knew much of God's grace,
Through power of the Trinity.

He raised three clerks from death to life
Who had been put in salt full swythe, [very quickly]
By a butcher and his wife,
And hidden were in privite. [secrecy]

He married three maidens of mild mood; [disposition]
He gave them gold for their food, [sustenance]
He turned them from ill to good,
Through power of the Trinity.

Another deed he did, certainly:
He saved a thief who was very sly,
Who stole a pig out of its sty;
His life then saved he.

God grant us grace here, old and young,
Him to serve at his pleasing;
To heaven's bliss may he us bring,
Through power of the Trinity. 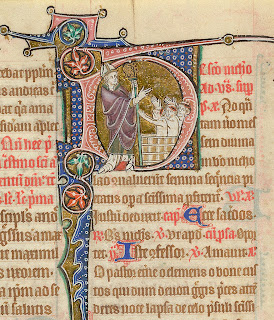 Seynt Nicholas was of gret poste
for he worchepid maydenis thre
that wer sent in fer cuntre
Common wommen for to be.

Her fader was man in powre aray
onto his dowteris he gan say,
"Dowteris, зe must away;
Non lenger kepe зou I may!

Saint Nicholas was of great poste [power]
For he gave help to maidens three
Who were sent into a far country
Common women for to be. [to become prostitutes]

Their father was a man of poor array;
To his daughters he did say,
"Daughters, ye must away;
No longer keep you I may!

"Daughters, my blessing I you give,
But business will not with me thrive;
Ye must by your bodies live,
Your words ye must drive."

The eldest daughter swore by bread of wheat,
"I would rather beg my meat
And find my food where I may it get
Than lead my life in lechery."

The middle daughter said, so mote she thee ['so may she thrive' - an oath]
"I would rather hanged and drawn be
With wild horses two or three
Than lead my life in lechery."

Saint Nicholas at the town's end
Counselled those maidens home to wend
And through God's grace he would them send
Husbands three, good and hend. [kind] 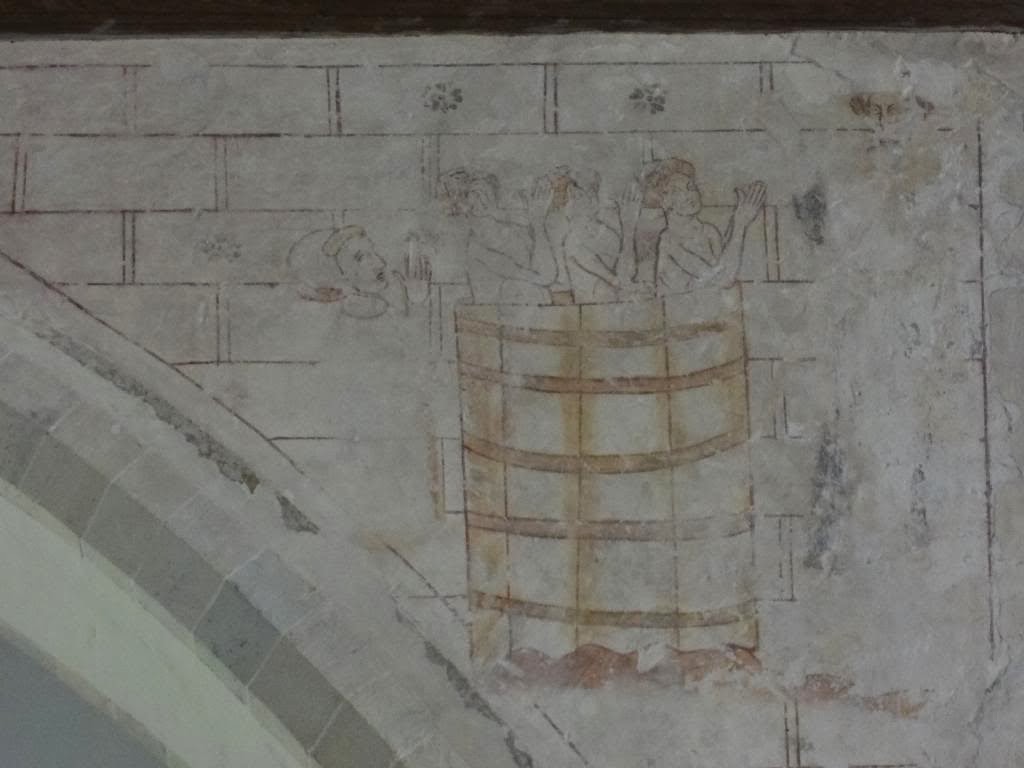 St Nicholas saves the clerks (wall-painting from Bishopsbourne, Kent)
Posted by Clerk of Oxford at 6:15 pm