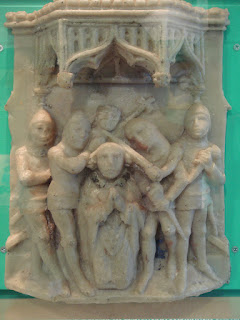 I pra you, seris, al in fere,
Worchip Seynt Thomas, this holé marter.

2. Fore Holé Cherche ryght ale hit was —
Ellis we had then songyn “alas!” —
And the child that unborne was
Schul have boght his lyve ful dere.
I pra you, seris, al in fere,
Worchip Seynt Thomas, this holé marter.

4. Then no child criston schuld be,
Ne clerke take ordere in no degré,
Ne mayde mared in no cuntré,
Without trebeut in the kyng dangere.
I pra you, seris, al in fere,
Worchip Seynt Thomas, this holé marter.

5. Thus Holé Cherche he mad fre;
Fore fyfté poyntis he dyed, treuly;
In heven worchipt mot he be,
And fader and moder him gete and bere!
I pra you, seris, al in fere,
Worchip Seynt Thomas, this holé marter.

This is a carol from the manuscript of John Audelay's poems.  Of the English carols in honour of Thomas Becket, this is still my favourite and this one is also more intricate than Audelay's (and still has its music), but this is still interesting.  Here's a translation:

I pray you, sirs, all together, honour Saint Thomas, this holy martyr.

2. It was all for the sake of Holy Church; else we would all have sung 'alas', and the child then unborn would have paid sorely for it!

3. Wherever priests were in prison, he freed them, so that no cleric should be hanged, but only heretics or traitors, if any such there were.

4. At that time no child could be christened, and no cleric ordained, nor maiden married in any place, without paying tribute under the king's jurisdiction.

5. Thus he made Holy Church free; he died for the sake of fifty points.  May he be honoured in heaven, and the father and mother who conceived and bore him!


The 'fifty points' were a list of legislative points to which St Thomas refused to give his assent, since he saw them as giving the king too much control over the church.  Richard Greene notes that the importance of these 'fifty (or fifty-two) points' was long remembered, and became a subject of contention again at the time of the Reformation.  He recounts a story about William Umpton, who was imprisoned in the Tower in 1532 because when someone mentioned to him that Thomas Becket had died for 52 points concerning the commonwealth, Umpton replied the "52 points were a dance called Robin Hood" (i.e. nonsense).  The other man asked him if he would compare Robin Hood with St Thomas, to which Umpton replied asking why St Thomas was a saint and not Robin Hood?  And for this he was accused of heresy...
Posted by Clerk of Oxford at 11:53 am