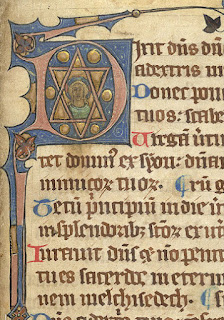 Christ within a star, from a medieval English Psalter (Harley 1688)


This is an extract from an anonymous Old English poetic version of the O antiphons, known as the 'Advent lyrics' or as Christ I, written some time before the tenth century; this is 'O Oriens', addressed to the Daystar.

O Morning Star,
splendour of light eternal and sun of righteousness:
Come and enlighten those who dwell in darkness and the shadow of death.


Here's my translation of the Old English; I tried to make it a little bit poetic as well as accurate.

O Earendel, brightest of angels,
sent to mankind over middle-earth,
righteous sun's radiance,
splendid above all stars! Of thine own self
thou ever enlightenest every age.
As thou, God born of God long ago,
Son of the true Father, eternally existed
without beginning in the glory of heaven,
so thine own creation cry with confidence
to thee now for their needs, that thou send
that bright sun to us, and come thyself
to lighten those who long have lived,
surrounded by shadows and darkness, here
in everlasting night; who, shrouded by sins,
have had to endure death's dark shadow.

Now, hope-filled, we look for healing,
brought to the world's people through the word of God,
who was in the beginning with the almighty Father
equally eternal with God, and now became
flesh, free of failings, born of the virgin,
a support to the sorrowful. God was with us,
seen without sin; together dwelt
the mighty Measurer's child and the son of man,
at peace among the people. We may ever address
our thanks to the lord of victory for his deeds,
because he chose to send himself to us.


J. R. R. Tolkien came across this poem as an undergraduate at Oxford, around 1913, and it gave him the name 'Earendel' which he came to use in his own mythology ('middle-earth' is there too, as you can see).  Later in his life he wrote of how encountering the first few lines of this poem produced "a curious thrill, as if something had stirred in me, half wakened from sleep. There was something very remote and strange and beautiful behind those words."  He explained his understanding of the name's appearance in this poem:

I was struck by the great beauty of this word (or name), entirely coherent with the normal style of A[nglo]-S[axon], but euphonic to a peculiar degree in that pleasing but not 'delectable' language. Also its form strongly suggests that it is in origin a proper name and not a common noun. This is borne out by the obviously related forms in other Germanic languages; from which amid the confusions and debasements of late traditions it at least seems certain that it belonged to astronomical-myth, and was the name of a star or star-group. To my mind the A-S uses seem plainly to indicate that it was a star presaging the dawn (at any rate in the English tradition): that is what we now call Venus: the morning-star as it may be seen rising brilliantly in the dawn, before the actual rising of the Sun. That is at any rate how I took it. Before 1914 I wrote a 'poem' upon Earendel who launched his ship like a bright spark from the havens of the Sun. I adopted him into my mythology - in which he became a prime figure as a mariner, and eventually as a herald star, and a sign of hope to men.

You might enjoy the album "The Dark Peak and the White" by Bella Hardy (full name: Arwen Arabella Hardy). Her song "Ilam Lullaby", sung in the persona of the wife of King Bertram of Mercia, includes the line "Safe under Earendel, brightest of angels ..."

How interesting! I've come across Bella Hardy's music before but not that album - I'll search it out.

That was a wonderful post to read on this dark, stormy morning in Canada! Love your blog!
Mary

I'm wondering now if I haven't been reading this poem wrong. I was taught in grad school, and have always repeated, that Earendel is John the Baptist (the Morning Star being a precursor to the rising of the Sun, which corresponds to Christ). The way you've translated it here, it seems like the Morning Star and "Bright Sun's Radiance" are one and the same. Have I just been reading this wrong?

Such a lovely blog to find on winter solstice day. I am bookmarking your site.

Thanks, CathreaAna! Richard, I know some people have read it that way but to me it seems like the whole poem has to refer to Christ - there's the link to the 'O Oriens' antiphon, where of course Christ is the referent, and it just doesn't fit for me that phrases like 'of yourself you enlighten every age' could refer to John the Baptist! Christ can also be called the morning-star (as for instance by Bede: 'Christus est stella matutina...')