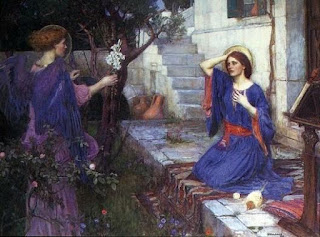 Young Mary, loitering once her garden way,
Felt a warm splendour grow in the April day,
As wine that blushes water through. And soon,
Out of the gold air of the afternoon,
One knelt before her: hair he had, or fire,
Bound back above his ears with golden wire,
Baring the eager marble of his face.
Not man's nor woman's was the immortal grace
Rounding the limbs beneath that robe of white,
And lighting the proud eyes with changeless light,
Incurious. Calm as his wings, and fair,
That presence filled the garden.
She stood there,
Saying, "What would you, Sir?" He told his word,
"Blessed art thou of women!" Half she heard,
Hands folded and face bowed, half long had known,
The message of that clear and holy tone,
That fluttered hot sweet sobs about her heart;
Such serene tidings moved such human smart.
Her breath came quick as little flakes of snow.
Her hands crept up her breast. She did but know
It was not hers. She felt a trembling stir
Within her body, a will too strong for her
That held and filled and mastered all. With eyes
Closed, and a thousand soft short broken sighs,
She gave submission; fearful, meek, and glad...

She wished to speak. Under her breasts she had
Such multitudinous burnings, to and fro,
And throbs not understood; she did not know
If they were hurt or joy for her; but only
That she was grown strange to herself, half lonely,
All wonderful, filled full of pains to come
And thoughts she dare not think, swift thoughts and dumb,
Human, and quaint, her own, yet very far,
Divine, dear, terrible, familiar...
Her heart was faint for telling; to relate
Her limbs' sweet treachery, her strange high estate,
Over and over, whispering, half revealing,
Weeping; and so find kindness to her healing.
'Twixt tears and laughter, panic hurrying her,
She raised her eyes to that fair messenger.
He knelt unmoved, immortal; with his eyes
Gazing beyond her, calm to the calm skies;
Radiant, untroubled in his wisdom, kind.
His sheaf of lilies stirred not in the wind.
How should she, pitiful with mortality,
Try the wide peace of that felicity
With ripples of her perplexed shaken heart,
And hints of human ecstasy, human smart,
And whispers of the lonely weight she bore,
And how her womb within was hers no more
And at length hers? Being tired, she bowed her head;
And said, "So be it!" The great wings were spread
Showering glory on the fields, and fire.
The whole air, singing, bore him up, and higher,
Unswerving, unreluctant. Soon he shone
A gold speck in the gold skies; then was gone.

The air was colder, and grey. She stood alone.


The painting is Waterhouse's 'The Annunciation', and though I always think of Waterhouse as such a Victorian painter, the picture is actually later than the poem; the painting dates to 1914, the poem to Autumn 1912, when Brooke was 25 years old.

I find this poem interesting, because as far as I know it's Rupert Brooke's only poem on an explicitly Christian subject (there are, however, several about his scepticism towards religion). I've spent some time this Advent with Edwin Muir's poem 'The Angel and the Girl', written in the late 1940s.  Muir's wonderful poem was inspired by seeing a depiction of the Annunciation in Rome, which he described thus:


An angel and a young girl, their bodies inclined towards each other, their knees bent as if they were overcome by love, 'tutto tremante', gazed upon each other like Dante's pair; and that representation of a human love so intense that it could not reach farther seemed the perfect earthly symbol of the love that passes understanding.

The gaze in Muir's poem is an expression of communing love, powerful, but mutual; Brooke imagines something a little less comfortable.  Even so, I like Brooke's description of how Mary's body becomes strange to her, both a sensation of joy and a sudden, exhausting loneliness; it seems to approach nearer to an understanding of a woman's experience of pregnancy than one might expect from a young man!  But it's also true that it's characteristic of Brooke's attitude to the human body in all his poetry - it's always something strange about it, and it is at the same time ugly and beautiful.  As for the angel, impassive and unapproachable, 'radiant, untroubled in his wisdom, kind', this is a Gabriel exactly like the girls of Brooke's love poems; it especially reminds me of 'Dining-Room Tea', with the sudden glimpse of the lover 'august, immortal, white,/ Holy and strange'.

This both amuses and intrigues me; I wonder if it's inevitable that poets imagine this scene in reference to their own experience of human love...
Posted by Clerk of Oxford at 12:39 pm