I woke up this morning happy about Advent, and it took me about thirty minutes on the internet to become discouraged again.  There's something about big festivals which brings out the smug in bloggers; anything where someone else might be 'doing it wrong' induces a particular kind of cheerful self-satisfaction, and even if each individual voice is reasonable, in consort they become a clamour of irritants.  This morning I was overwhelmed by the noisy chatter about 'here's what I do in Advent': my children chant hymns every morning (in Latin, obviously); my wife crafts her own Jesse tree; we don't put up our Christmas decorations until Christmas Eve (not like those tacky people who do it before!); my church doesn't have Advent wreaths, those heathen abominations; we sing (or don't sing) this hymn or that anthem, and anyone else is doing it wrong!  All very worthy and well-meaning, no doubt, but exhausting; and it made me homesick and heart-sick.  Advent is a time of longing, but this took it a little too far!

So amid all the noise I jettisoned my intended post on the hymn 'Veni Redemptor Gentium' (it will come along in a few days), and went instead to look at pictures - specifically, the silence and stillness of medieval images of the Annunciation.  Medieval poetry of the Annunciation tends to emphasise the quiet, simple nature of the moment when the Virgin conceived - 'he came so still where his mother was/as dew in April that falleth on the grass'; 'with that word the knot was knit'; 'between them two the flower was sown,/ and it was kept, no man knowing'; 'this ghostly case/doth me embrace'; 'as sun that shineth through the glass/so Jesu in his mother was'...  You can't imagine a gentler set of metaphors - the perfect antidote to Advent noise - and the pictures are equally lovely.  The British Library has recently made their huge catalogue of images from illuminated manuscripts free of copyright restrictions, to my delight (it will make my life much easier!) and so I can share with you some of these wonderful images, all from English manuscripts made between 1200-1500.

In each case, click (twice) to enlarge and explore - it's worth it.

This was perhaps my favourite, from a fifteenth-century Book of Hours made in Suffolk (Arundel 302): 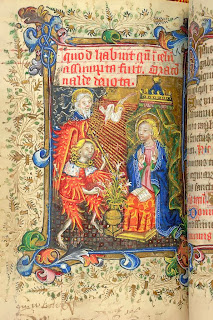 The barefoot Gabriel looks positively wild, a creature of flame and fire, but the flowing sunbeams are glorious.

From Royal 2 A XVIII, a Book of Hours which was made in the fifteenth century for Margaret Beauchamp, Duchess of Somerset and grandmother of Henry VII: 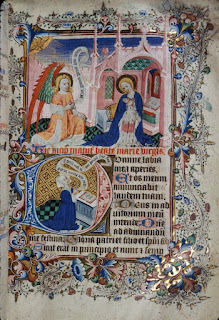 This is a feast of colour and pattern, as rich and splendid an object as money could buy in the Middle Ages, but at the centre is the stillness of Mary and the kneeling angel.  The woman depicted below is devoutly asking 'Mater ora filium, ut post hoc exilium nobis donet gaudium sine fine', 'Mother, pray thy son that after this our exile he may grant us joy without end'.

From the fourteenth-century Royal 6 E VII: 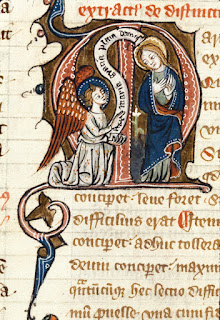 This manuscript is an encyclopedia, and this tiny illustrated initial begins the 'M' entry for 'Maria Mater Dei Virgo'.  There's a sinuous flow to the speech-text and the Virgin's pose which echoes the curves of the surrounding 'M'.

An especially calm scene from a fourteenth-century manuscript, Egerton 2781: 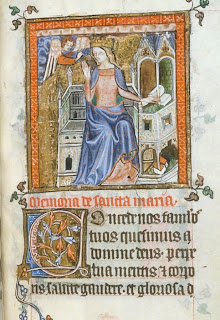 The Virgin, interrupted while reading (in a castle which looks quite a bit like the Bodleian Library), lifts one hand to greet the angel.  Her red-spotted blue cloak is so beautiful!

And an earlier image, from the thirteenth-century Westminster Psalter: 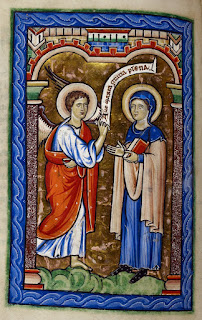 The blue surround is my favourite thing about this image; it looks like their meeting is girded by the sea.  Notice that the angel only has one foot in the picture, and the other is still beyond the frame - he's just arriving!  But if he is all movement, the Virgin is all stillness, as stately as the folds of her drapery.


I went looking for the quietest setting of 'I sing of a maiden' I could find, and came up with this (with second place going to Gustav Holst):

I sing of a maiden
That is makeles:
King of alle kinges
To her son she ches.

He cam also stille
Ther his moder was
As dewe in Aprille
That falleth on the gras.

He cam also stille
To his modres bowr
As dewe in Aprille
That falleth on the flowr.

He cam also stille
Ther his moder lay
As dewe in Aprille
That falleth on the spray.

Moder and maiden
Was nevere noon but she:
Wel may swich a lady
Godes moder be.
Posted by Clerk of Oxford at 4:58 pm

Email ThisBlogThis!Share to TwitterShare to FacebookShare to Pinterest
Labels: Advent, Medieval, The Annunciation