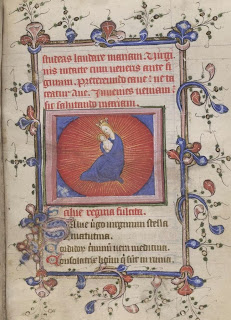 Heaven and earth in little space (BL Stowe 16, f. 120)
Following on from my post the other day about the root of Jesse, let's have some more medieval flower carols. These two are both fairly well-known, having been set to music by a number of modern composers, and they're both beautiful.

There is no rose of swich vertu
As is the rose that bare Jhesu.

There is no rose of swich vertu
As is the rose that bare Jhesu.
Alleluia.

Be that rose we may weel see
That he is God in personys three,
Pari forma.

Leve we all this wordly merthe,
And folwe we this joyful berthe;
Transeamus.

This is a carol from the first half of the fifteenth century. The principal manuscript is now almost unreadable in places, so transcriptions vary; the above is Richard Greene's version, from A Selection of English Carols (Oxford, 1962), p. 107. That manuscript is actually a roll (Cambridge, Trinity College O.3.58) - three pieces of vellum stitched together to form a strip six feet long. It contains thirteen carols, including one celebrating Henry V's victory at Agincourt in 1415; there's a list of them all here. You can hear a number of the carols in this video of the group Alamire recording the carols for a recent album.

'There is no rose' is one of the best-known medieval carols, but I had sung and heard it many times before appreciating some of its key features: first, that some of the Latin phrases ('res miranda' and 'pari forma') come from the Sequence for Christmas, 'Laetabundus', and secondly, that the virtue of the rose/Mary in the first line is not just 'goodness, purity', as I had always assumed, but a particular kind of power, the special healing power of a plant. (Think of the prologue to the Canterbury Tales: 'Whan that Aprille with his shoures sote / The droghte of Marche hath perced to the rote, / And bathed every veyne in swich licour / Of which vertu engendred is the flour...') The Middle English Dictionary entry for vertu makes interesting reading in conjunction with this carol; the sense here blends several of the word's potential meanings, 'the quickening power of a flower or root; the life-sustaining force within a plant; the vegetative power of nature', 'divine power, divine might', and 'moral excellence, goodness'. 'There is no rose of such power' would really be a better translation.

Mary is often connected with the rose; medieval English examples include 'Blessed Mary, mother virginal' (where Mary is called 'red rose of Jericho') and 'Now shrinketh rose and lily-flower' (where she is imagined as a healer with sweet-smelling herbs), and for a non-English example there's always 'Es ist ein Ros entsprungen'. The particular appeal of the metaphor in this carol, I think, is encapsulated in the verse 'in this rose contained was / heaven and earth in little space'; it conjures up an image of the closely-packed petals of a rosebud, which contains so much in so tiny a space, so perfectly arranged.

There is no rose of such virtue
As is the rose that bore Jesu.

There is no rose of such virtue
As is the rose that bore Jesu.
Alleluia.

For in this rose contained was
Heaven and earth in little space;
A marvellous thing!

By that rose we may truly see
That he is God in persons three,
Equal in form.

The angels sang to the shepherds
'Glory to God in the highest';
Let us rejoice!

Let us leave all this worldly mirth,
And follow this joyful birth;
Let us go!

This is the music which appears in the manuscript:

And settings by some modern composers, John Joubert:

And I came across this on Youtube, by Z. Randall Stroope:

Our second 'rose' carol is 'Of a rose, a lovely rose':

Of a rose, a lovely rose,
Of a rose is al myn song.

Lestenyt, lordynges, both elde and yinge,
How this rose began to sprynge;
Swych a rose to myn lykynge
In al this word ne knowe I non.

The flour sprong in heye Bedlem,
That is bothe bryht and schen:
The rose is Mary hevene qwyn,
Out of here bosum the blosme sprong.

The ferste braunche is ful of myht,
That sprang on Cyrstemesse nyht,
The sterre schon over Bedlem bryht
That is bothe brod and long.

Prey we to here with gret honour,
Che that bar the blyssid flowr,
Che be our helpe and our socour
And schyd us fro the fyndes bond.

This is John Rutter's setting:

Of a rose, a lovely rose,
Of a rose is all my song.

Listen, lords, both old and young,
How this rose began to spring;
Such a rose to my lykynge [delight]
In all this world never knew I none.

The angel came from heaven's tower,
To greet Mary with great honour,
And said she would bear the flower
That would break the fiend's bonds.

The flower sprung in high Bethlem,
It is both bright and shen: [fair]
The rose is Mary, heavenly queen,
Out of her bosom the blossom sprung.

The first branch is full of might,
It sprung on Christmas night,
The star shone over Bethlem bright
Which is both broad and long.

The second branch sprung to hell,
The fiend's power down to fell:
Therein could no soul dwell; [no soul had to remain there]
Blessed be the time the rose sprung!

The third branch is good and sweet,
It sprang to heaven, crop and root,
Therein to dwell and be our bote; [redemption]
Every day it appears in the priest's hand.

Pray we to her with great honour,
She who bore the blessed flower,
May she be our help and our succour
And shield us from the fiend's bonds.

This is a fifteenth-century carol which survives in a number of manuscripts with slightly differing versions; some have verses which go up to five 'branches', representing the Five Joys of Mary. This version is from a collection of carols, Bodleian Library MS. Eng. poet. e. 1. The bote of the penultimate verse means 'redemption, remedy' but, when offered by a plant, also has overtones of healing, medicine, and cure - of vertu. 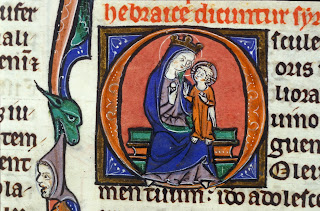 I love them all so much!!

There's a lovely setting of 'There is no rose' by Simon Tayton too.

Once again my forays lead me to your blog in serendipity!
I called my daughter Miranda Rose because for the hours she had no name, I had an earworm of a very short fragment of the Britten version, without remembering what it was. Then 'heaven and earth in lytel space' just meant that she couldn't have anything else, when I finally worked out what was echoing in my head.

What a lovely story, and a beautiful name!