You never know yourself till you know more than your body. The Image of God was not seated in the features of your face, but in the lineaments of your Soul. In the knowledge of your Powers, Inclinations, and Principles, the knowledge of yourself chiefly consisteth; which are so great that even to the most learned of men, their Greatness is Incredible, and so Divine, that they are infinite in value.

Alas, the world is but a little centre in comparison of you! Suppose it millions of miles from the Earth to the Heavens, and millions of millions above the stars, both here and over the heads of our Antipodes, it is surrounded with infinite and eternal space; And like a gentleman's house to one that is travelling, it is a long time before you come unto it, you pass it in an instant, and leave it for ever. The Omnipresence and Eternity of God are your fellows and companions, and all that is in them ought to be made your familiar Treasures. Your understanding comprehends the World like the dust of a balance, measures Heaven with a span, and esteems a thousand years but as one day.

Bede, Historia ecclesiastica, II:13, reporting words supposedly spoken in 627 by one of the men of King Edwin of Northumbria, as they discussed the question of converting to Christianity.


O king, it seems to me that this present life of man on earth, in comparison to that time which is unknown to us, is as if you were sitting at table in the winter with your ealdormen and thegns, and a fire was kindled and the hall warmed, while it rained and snowed and stormed outside. A sparrow came in, and swiftly flew through the hall; it came in at one door, and went out at the other. Now during the time when he is inside, he is not touched by the winter's storms; but that is the twinkling of an eye and the briefest of moments, and at once he comes again from winter into winter. In such a way the life of man appears for a brief moment; what comes before, and what will follow after, we do not know. Therefore if this doctrine offers anything more certain or more fitting, it is right that we follow it.

And in þis he shewed me a lytil thyng þe quantite of a hasyl nott, lyeng in þe pawme of my hand as it had semed, and it was as rownde as eny ball. I loked þer upon wt þe eye of my vnderstondyng, and I þought, 'What may þis be?' And it was answered generally thus: 'It is all þat is made.' I merueled howe it myght laste, for me þought it myght sodenly haue fall to nought for lytyllhed. & I was answered in my vnderstondyng: 'It lastyth & euer shall for god louyth it, and so hath all thyng his begynning by þe loue of god.' In this lytyll thyng I sawe thre propertees. The fyrst is þt god made it, þe secunde is þet god louyth it, & þe þrid is, þat god kepith it.

[And in this he shewed me a little thing, the size of a hazelnut, lying in the palm of my hand, as it seemed, and it was as round as a ball. I looked upon it with the eye of my understanding, and I thought, 'What can this be?' And it was fully answered thus: 'It is all that is made.' I marvelled how it could survive, for it seemed to me that it could suddenly have fallen into nothing, it was so little. And I was answered, in my understanding: 'It survives, and ever shall, because God loves it; and so everything has its beginning because of the love of God.' In this little thing I saw three properties. The first is that God made it, the second is that God loves it, and the third is that God keeps it.] 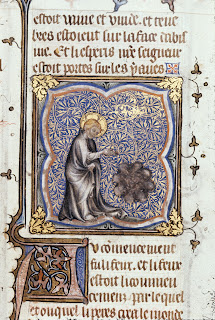 I am loving getting to know some of the thoughts and works of Thomas Traherne! Thank you very much.

I do like sharing my love of Thomas Traherne! The only problem when I post about him is managing to stop quoting, because I feel I could just go on for ever...

CoO,
What a glorious triptych of thoughts! Your blog is a treasure trove - thanks so much.
Peace,
B.R.