In Tenebris III: 'The world was a welter of futile doing' 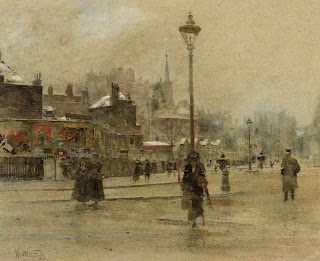 
Just to have something that isn't about Christmas... This completes the sequence of Thomas Hardy poems beginning with In Tenebris I and II.  All three are deeply moving poems (II, in particular, just breaks my heart), which is why it's taken me more than a year to post all of them, but this one does at least have glimpses of happiness amid the gloom, three vignettes of joy or peace, swiftly and skilfully conjured up.  And as a bonus, this poem also shows Hardy's alliterative skill at its best.

Say, on the noon when the half-sunny hours told that April was nigh,
And I upgathered and cast forth the snow from the crocus-border,
Fashioned and furbished the soil into a summer-seeming order,
Glowing in gladsome faith that I quickened the year thereby.

Or on that loneliest of eves when afar and benighted we stood,
She who upheld me and I, in the midmost of Egdon together,
Confident I in her watching and ward through the blackening heather,
Deeming her matchless in might and with measureless scope endued.

Or on that winter-wild night when, reclined by the chimney-nook quoin,
Slowly a drowse overgat me, the smallest and feeblest of folk there,
Weak from my baptism of pain; when at times and anon I awoke there--
Heard of a world wheeling on, with no listing or longing to join.

Even then! while unweeting that vision could vex or that knowledge could numb,
That sweets to the mouth in the belly are bitter, and tart, and untoward,
Then, on some dim-coloured scene should my briefly raised curtain have lowered,
Then might the Voice that is law have said "Cease!" and the ending have come.
Posted by Clerk of Oxford at 10:34 pm