"If weeping might ripe be, it seemed then in season" 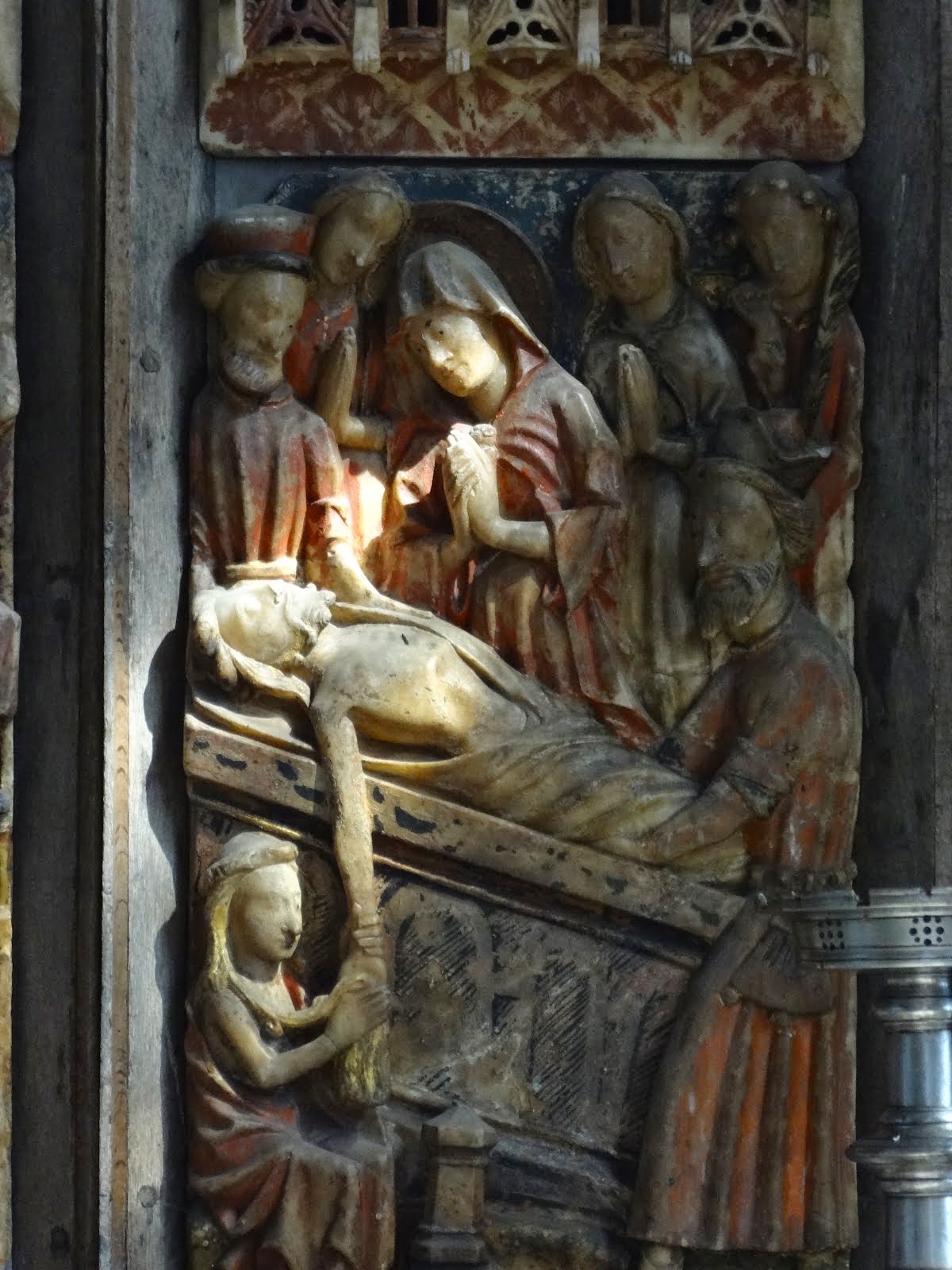 With favoure in hir face ferr passyng my reason,
And of hir sore weepyng this was the enchesone:
Hir soon in hir lap lay, she seid, slayne by treason.
Yif wepyng myght ripe bee, it seemyd than in season.
"Jhesu," so she sobbid,
So hir son was bobbid
And of his lif robbid,
Saying thies wordis as I say thee:
"Who cannot wepe, come lerne of me."

I said I cowd not wepe, I was so harde-hartid.
Shee answerd me shortly with wordys that smarted:
"Lo, nature shall move thee, thou must be converted;
Thyne owne Fader this nyght is deed," This she thwarted.
"Jhesu, so my son is bobbid
And of his lif robbid."
For sooth than I sobbid,
Veryfying the wordis she seid to me.
"Who cannot wepe, come lerne at mee."

On me she caste hire ey, said, "See, man, thy brothir."
She kissid hym and said, "Swete, am I not thy moder?"
In sownyng she fill there, it wolde be non othir;
I not which more deedly, the toone or the tothir.
Yit she revived and sobbid,
So hire son was bobbid
And of his lif robbid;
"Who cannot wepe," this was the laye.
And with that word she vanysht away.

Amid all the many creative responses to Christ's Passion in medieval poetry, this superb fifteenth-century poem ranks with the very best. The speaker of the poem has a vision of Mary holding the body of Christ in her lap, weeping, and speaking to him, and her anguish is so movingly evoked that the reader cannot help but share her grief. The vision appears with abrupt, startling vividness, while the speaker is in that strange state of being 'suddenly afraid, half-waking, half-sleeping'. The 'suddenly' reminds me of Julian of Norwich, who sometimes shifts from one vision into another with the phrase 'in this suddenly' - as if the light has flickered and the scene has changed. And there's a subtle shift with the next line - who is 'greatly dismayed', Mary, or the speaker, or both? Mary's sorrow is very tenderly depicted, and the rhythm has an insistent power which makes this poem, to me, the most moving of the many medieval lyrics on this theme. (Though this comes close).

Suddenly afraid, half waking, half sleeping,
And greatly dismayed, a woman sat weeping.

With favour in her face far passing my reason, [favour =beauty]
And of her sore weeping this was the enchesone: [cause]
Her son in her lap lay, she said, slain by treason.
If weeping might ripe be, it seemed then in season.
"Jesu," she sobbed,
Thus her son was bobbed [beaten, derided]
And of his life robbed,
Saying these words as I tell thee:
"Who cannot weep, come learn of me."

I said I could not weep, I was so hard-hearted;
She answered me shortly with words that smarted:
"Lo, nature shall move thee, thou must be converted;
Thine own Father this night is dead." Thus she thwarted. [argued]
"Jesu! thus my son is bobbed
And of his life robbed."
For sooth then I sobbed,
Verifying the words she said to me: [proving the truth of the words]
"Who cannot weep, come learn of me."

"Now break, heart, I thee pray! this corpse lies so rewlye, [pitifully]
So beaten, so wounded, treated so foully.
What creature may me behold and weep not? None, truly,
To see my dead dear son lie bleeding, lo, thus newly."
Ever still she sobbed,
That her son was bobbed
And of his life robbed,
Renewing these words as I say thee:
"Who cannot weep, come learn of me."

On me she cast her eye, said, "See, man, thy brother."
She kissed him and said, "Sweet, am I not thy mother?"
In swooning she fell there, it could be none other;
I know not which was more deathly, the one or the other.
Yet she revived and sobbed,
That her son was bobbed
And of his life robbed;
"Who cannot weep," - this was the lay.
And with that word she vanished away. 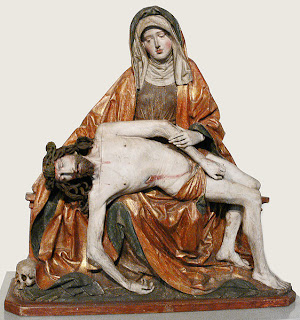 Hi, I'm just wondering what are the names of the manuscripts? Many thanks, Joanne.