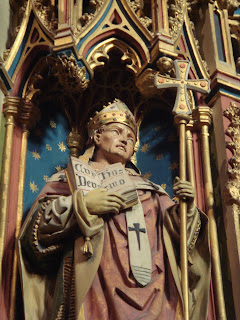 Anselm on the Chicele tomb

After posting so much about St Anselm over the past few months for absolutely no reason, I finally have a good excuse - today is the anniversary of his death in 1109. After posting stories about Anselm's childhood dreams, adolescent arrogance, and sympathy for hares and owls, I wondered what was left to share with you. Well, what made me fond of Anselm in the first place was the Life of Anselm written by Eadmer, the English monk of Canterbury who was born on the cusp of the Norman Conquest and lived to become not only a historian and hagiographer but the friend, secretary and biographer of the greatest theologian ever to be Archbishop of Canterbury. So here's Eadmer's account of the genesis of his Life.

Eadmer obviously realised fairly early on after joining Anselm's retinue, around 1093, that posterity would be interested in what Anselm had said and done as archbishop, and he started making notes preparatory to a biography. He is particularly good at making records of conversations - one of the factors which helps to make his Life of Anselm such a fascinating source. He had open eyes and open ears, and liked to ask questions and make connections with people; he was a born historian! And he lived through interesting times: as I said, he was born on the eve of the Norman Conquest (c.1060) and grew up in the monastic community at Canterbury. The world before the Conquest was the world of his childhood, and in later life Eadmer remembered it with the heightened vividness of a child's first memories: for instance, he gives a full and detailed description of the layout of the Saxon cathedral, which was destroyed by fire when he was about seven years old - he recounts where all the altars and saints' tombs lay, like an old man describing his childhood home. Elsewhere he reports how the monks who were old when he was young would relate stories about the reign of Cnut and the gifts Queen Emma gave to the community. And so, nurtured in the cradle of English Christianity (as he would have seen it), he had strongly personal reasons for loving the Anglo-Saxon church, its saints and its customs (or what he thought were its customs). But it was a doomed world: Eadmer was still a child when Norman monks came to Canterbury, and his adolescence was spent in the transformed monastery created by Archbishop Lanfranc after 1070, a community "much more foreign in language and outlook, with the English element in it ever shrinking in numbers and importance" (in R. W. Southern's words). Eadmer speaks highly of Lanfranc but resented what he saw as Lanfranc's marginalisation of English saints like Ælfheah and Dunstan, Canterbury's pride and joy.

And then he encountered Anselm, in 1079, when Anselm visited Canterbury and gave his opinion on the question of whether Ælfheah was really a saint. No surprise that Eadmer loved Anselm for that! If the language of the passage below seems extravagant to you, remember that it's the work of a man writing about someone who had been his closest companion and friend for fifteen years, whom he had first encountered providing a rational defence of a world which the teenage Eadmer saw disappearing before his eyes, but was powerless to protect. 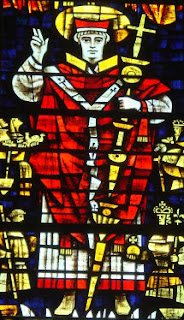 Here then I shall bring this small work to an end, first however giving all who deign to read or listen to it a brief warning not to allow their minds to be injured by any lack of belief in the things which have been described. For in writing about them, I have made use of such authorities as I was quite certain were far removed from any suspicion of falsehood. Indeed I put together much of the first book from the words of the Father [Anselm] himself. For sometimes - since he was a man of a most pleasant disposition - he used as if in jest to relate in homely language in the midst of his other conversation what he did as a boy, as a young man, or before he adopted the monastic habit, or while he was a monk, or while he was prior or abbot, thinking that his hearers would take these stories in the same casual spirit in which they were told... Those miracles which are recorded in the second book were almost all either seen by me with my own eyes, or heard with my own ears, or learnt in some other way by personal experience, for it was my good fortune to enjoy his company constantly from the time when he began his pontificate. And I affirm that it is a shocking thing for anyone knowingly to write what is false in sacred histories. For the soul of the writer is slain every time they are read or listened to, since in the things which he has falsely written he tells abominable lies to all his readers.

Moreover, when I had first taken the work in hand, and had already transcribed onto parchment a great part of what I had drafted in wax, Father Anselm himself one day called me to him privately and asked what it was I was drafting and copying. And, when I had shown my desire to conceal the subject by silence rather than disclose it, he ordered me either to desist from what I had begun and turn my mind to other things, or to show him what I was writing.

Now as I had been supported by his help and strengthened by his corrections in some other things which I had written, I willingly obeyed, hoping that out of his natural kindness of heart he would correct whatever needed to be corrected and rearrange in its proper order anything which had taken place otherwise than I had described. Nor were my hopes deceived in this belief, for he did in fact, correct some things, and suppress others, change the order of some, and approve other things in this small work. At this my heart was not a little rejoiced, and I prided myself perhaps more than I ought to have done that what I had written was fortified by so great and rare an authority.


I think you would! This makes me wonder what Anselm would have been like as a doctoral supervisor - an intimidating prospect...

But a few days after the work had been corrected, the archbishop called me to him, and ordered me to destroy entirely the quires in which I had put together the work, for he considered himself far too unworthy for future ages to place the least value on a literary monument to his honour. This was certainly a severe blow to me. Nevertheless, I dared not entirely disobey his command, and yet I was not willing to lose altogether a work which I had put together with much labour. So I observed the letter of his command, and destroyed those quires, having first copied their contents onto other quires. Perhaps my action was not free from the sin of disobedience, for I carried out his order otherwise than I knew that he intended.

Wherefore I earnestly beg all those into whose hands these pages may fall; that - if there is anything in them that they find not altogether displeasing despite the weakness of the narrative - they will deign to intercede for this and for my other sins, lest the weight of them so holds me down that I am unable to come to him whose life and deeds I have however crudely described. For I can never forget how he replied to me once when I asked him to bring it to pass that, as he had had me for a companion in his labours here below, so I might share in his reward in Heaven. He said certainly he would willingly and gladly do this, only let me take care not to make myself too heavy for him. As to this, however, if the just Judge should put away his pity in assessing the weight of my sins, my soul would certainly not rise but go headlong into the bottomless pit.

Wherefore, as I began to say, now with all the prayers at my command I urge my readers to seek from God for me as for themselves that relief and remission of sins which they also desire to obtain. Otherwise the compassionate Father may be unable to raise me whither he has promised, burdened as I am with many sins; which may God who liveth, ruleth and reigneth over all, of his mercy keep far from me. 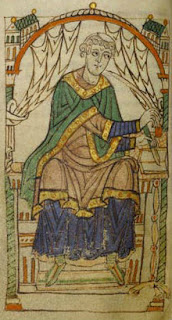 This is perhaps as much about Eadmer as about Anselm (but then, Eadmer doesn't get a feast-day...), so to finish with something more appropriate, here's a prayer of St Anselm, an extract from his 'Prayer to Christ':


Hope of my heart, strength of my soul,
help of my weakness,
by your powerful kindness complete
what in my powerless weakness I attempt.

My life, the end to which I strive,
although I have not yet attained to love you as I ought,
still let my desire for you
be as great as my love ought to be.

My light, you see my conscience,
because, “Lord, before you is all my desire,”
and if my soul wills any good, you gave it me.

Lord, if what you inspire is good,
or rather because it is good, that I should want to love you,
give me what you have made me want:
grant that I may attain to love you as much as you command.

Perfect what you have begun,
and grant me what you have made me long for,
not according to my deserts but out of your kindness
that came first to me. 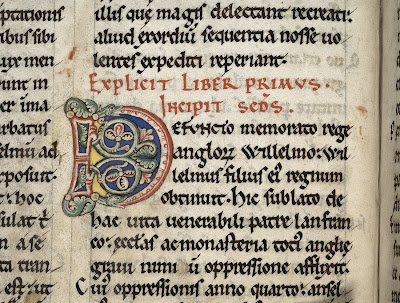 An initial from Eadmer's Life of Anselm, from BL Harley 315, f. 21v, a manuscript produced at Canterbury around the time of Eadmer's death
Posted by Clerk of Oxford at 9:03 pm

This, indeed, is quite lovingly written, with much aesthetic merit as the subjects of the story themselves have on a spiritual and academic plane. My day has come to a sludgy end w small inspiration to continue with my printmaking. Taking the time to read this post has brought a bit of light to watch the sun hurry down outside my studio windows. Thank you for your diligence and the careful way you have constructed your blog. It is most appreciated. For what do we have in this world but a good story or two to raise the spirit?