Some thoughts on Anglo-Saxon kings and crucifixes, inspired by the season. 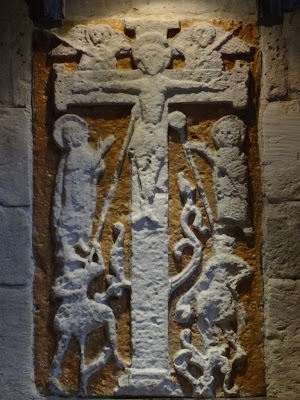 Wondrous was that victory-beam; I, stained with sins,
wounded with wickedness. I saw the tree of glory
adorned with drapery, shining with joys,
decked with gold; gems had
worthily wrapped the Ruler's tree.

The splendour of the cross which in The Dream of the Rood bursts in upon the dreamer, shining and speaking in the silent midnight, is an unearthly vision, but its description is not entirely poetic exaggeration; we know that the Anglo-Saxons built crosses on a grand scale, and decorated them extravagantly. Kings gave their crowns, earls their gold, noblewomen their jewels to adorn life-size crucifixes, and the richest Saxon churches and monasteries would have been full of such objects. To quote from a classic book on the subject, Barbara Raw's Anglo-Saxon Crucifixion Iconography and the Art of the Monastic Revival:

An inventory of the treasures of Ely made in 1075 or 1076 notes that the abbey possessed nineteen large crosses and eight smaller ones, including two processional crosses given by Archbishop Wulfstan and Bishop Athelstan. Worcester possessed fifteen crosses at the time of the Norman Conquest. Earlier in the century Brihtwold, bishop of Ramsbury (ob. 1045), gave his former monastery of Glastonbury twenty-six crosses together with other ornaments. Crosses were a favourite gift to monasteries. Edgar gave crosses to Ely and Glastonbury, Eadred presented a gold cross to the Old Minster at Winchester and Cnut gave a jewelled one to the New Minster...

The most spectacular of these crosses were the life-size crucifixes and Crucifixion groups, often in precious metals, which dominated the interior of late Anglo-Saxon churches. At Peterborough a huge crucifix of silver and gold, the gift of Abbot Leofric (1052-66), towered over the altar. When Hereward and his followers broke into the church in 1070 they tried at first to remove the crucifix bodily, but having climbed up to it they found it too heavy to move and had to content themselves with stealing the gold crown and footrest. Bury possessed a large robed crucifix said to have been copied by Abbot Leofstan (1044-65) from the Volto Santo at Lucca...

By the end of the Anglo-Saxon period at least five churches possessed large Crucifixion groups. The earliest was given by Leofric of Mercia (ob. 1057) and his wife Godgifu to the church at Evesham. At Durham Tostig of Northumbria (ob.1066) and his wife Judith placed a large crucifix in the church accompanied by figures of Mary and John, all covered in gold and silver. Stigand (ob. 1072) had at least three large Crucifixion groups made, all in precious metals, for the churches of Bury, Ely and Winchester.

None of these survive, but the small crucifixion scene from Romsey Abbey, above - which may have been a gift to the abbey from King Edgar - hints at what they might have been like. Probably contemporary with it is this scene from a tenth-century English Psalter (BL Harley 2904 f. 3v) 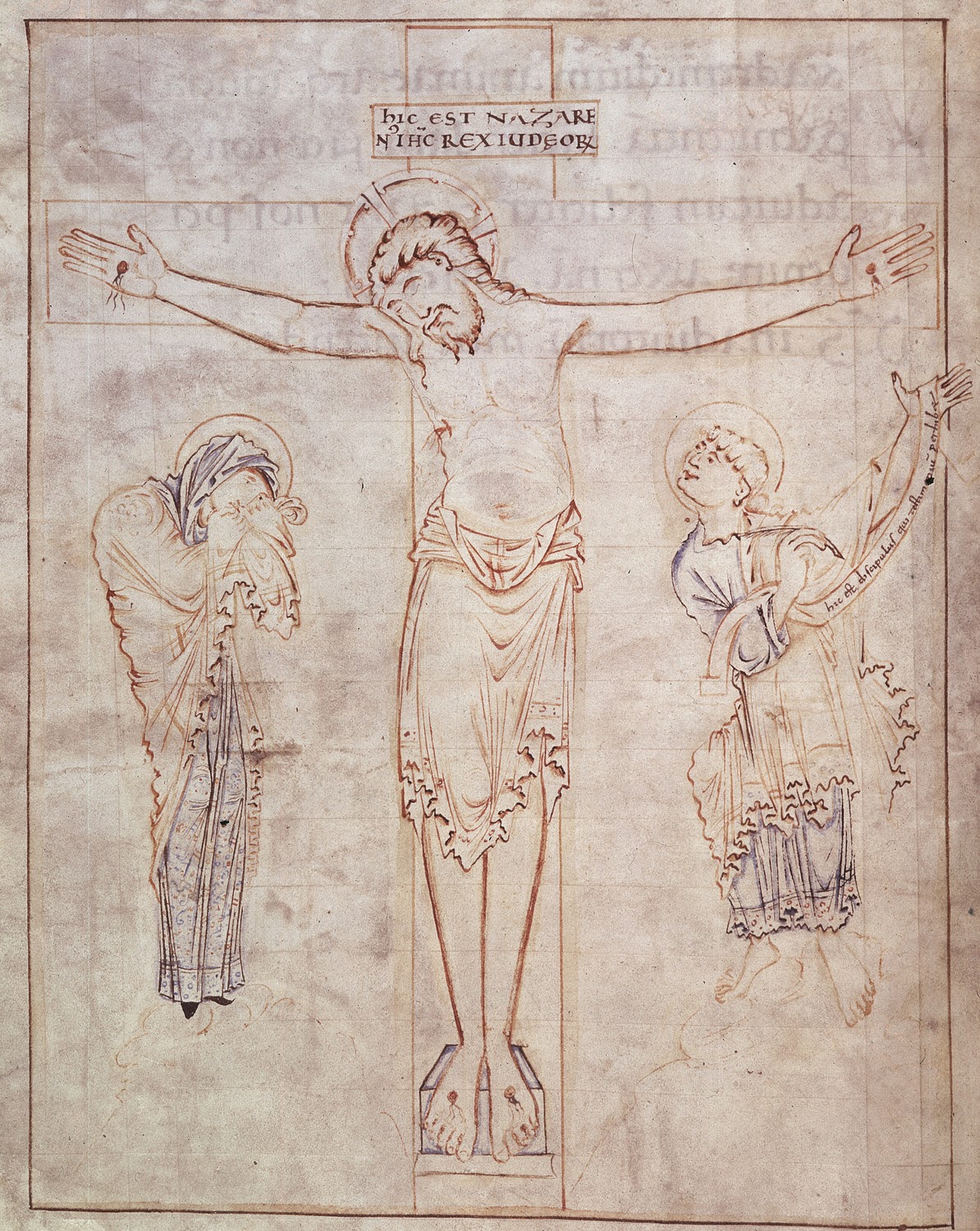 Half a century later, Cnut presented a precious cross to the New Minster, Winchester, a gift recorded in the monastery's Liber Vitae (now BL Stowe 944) with a drawing of incredible skill and beauty: 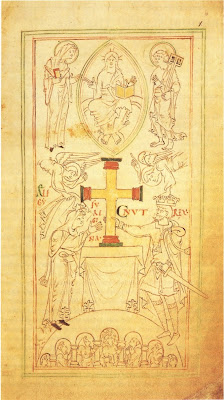 It dates to c.1031, and it shows Cnut and his queen Emma at the height of their glory: they interact with Christ and the saints and angels above them and with the monks below, the cross standing at the centre, at the intersection of earth and heaven. On another occasion, Cnut presented his own crown to a figure of the crucified Christ; later legend said he did this after demonstrating that he could not control the waves, because, he declared, "there is no king worthy of the name save Him by whose will heaven, earth and sea obey eternal laws". As late as the fifteenth century, Winchester believed it was in possession of the crucifix bearing Cnut's crown; Canterbury made a similar claim, and there are records of Anglo-Saxon crowned crucifixes elsewhere in England too. At Romsey Abbey there is a life-size crucifix, dating to the reign of Cnut, which probably once had a crown: 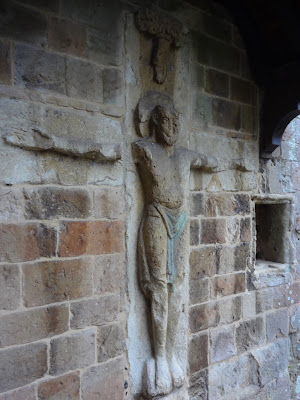 Such figures, by virtue of their size, possess a presence that is almost human, and people did indeed interact with them as if they were living beings; there are various stories of the statues speaking or coming to life to intervene in human affairs. A legend from Abingdon Abbey tells how when a group of Vikings had plundered the monastery and were sitting down to dine in the monks' refectory, the figure of Christ on a crucifix was so enraged by their intrusion that it came to life and with miraculous strength pulled stones out of the wall, pelting them at the Vikings, who fled in terror. An eleventh-century story about St Dunstan says that once when Dunstan was in council with the king and nobles at Winchester, arguing for the rights of monks over corrupt clerics, an image of the crucified Christ suspended high above their heads suddenly spoke up on his side, and won him the debate.

Most famous and most touching is the story of Harold Godwinson's interaction with the 'Black Rood' of Waltham Abbey, a life-size figure of Christ made of black marble. This had supposedly been dug out of the ground in response to a miraculous dream-vision in the second quarter of the eleventh century (which would date it around the same time as the Romsey crucifix and the illustration of Cnut's gift; I posted about its discovery here). The Danish lord who owned the land where it was found, Cnut's standard-bearer Tovi, girded his own sword around the figure, and his wife adorned it with gold made from her jewellery. Harold Godwinson had a special devotion to the Waltham Rood, and when he stopped at Waltham on the eve of the Battle of Hastings, on his journey from Stamford Bridge to Sussex, he humbly prostrated in prayer himself before the Rood, arms outstretched in the form of a cross. The Waltham Chronicle records that the sacristan, busying himself putting away things on the altar while the king prayed, saw that the figure of Christ bowed its head to ill-fated Harold as if in sorrow, grieving for what it knew was to come. Harold went away to fight at Hastings and the next time he came to Waltham, it was to be buried. It's hard not to be reminded of The Dream of the Rood, and the steadfast cross standing fast, powerful in its passivity, witnessing with almost overpowering emotion events it can but will not alter. 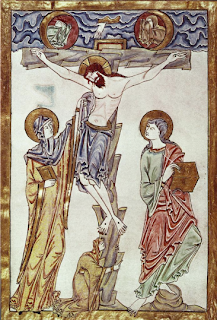 In this Crucifixion scene from an eleventh-century Gospel-book, the woman clinging to the foot of the cross may represent the woman who commissioned the book, Harold's sister-in-law Judith of Flanders (referenced above, with her husband Tostig Godwinson, as a donor to the church at Durham.) Note that the cross is a real, rugged tree, a tree of life in very fact. So perhaps it's not surprising that in The Dream of the Rood, the cross has a voice and the ability to feel and express emotion - torn from its roots in the wood, hacked about by cruel hands, it recalls:

Men bore me on their shoulders there, until they fixed me on a hill;
many enemies fastened me there. Then I saw the Lord of mankind
hasten with great courage, because he wanted to climb upon me.
There I did not dare, against the Lord's word,
to bend or break when I saw the earth's surface
tremble. I could have
felled all those enemies, but I stood fast.
The young hero stripped himself - he was God Almighty,
strong and stout-minded. He mounted the high gallows,
courageous in the sight of many, when he intended to save mankind.
I trembled when that man embraced me; yet I dared not bow to the ground,
fall to the surface of the earth, but I had to stand fast.
As a rood was I reared. I lifted the mighty King,
the Lord of the heavens; I did not dare to bend.
They drove me through with dark nails. On me those sores are seen,
open wounds of wickedness. I dared not harm any of them.
They mocked us, both together. I was entirely bedewed with blood
poured out from that man's side, after he sent forth his spirit.
I experienced on that hill
many cruel events, I saw the God of hosts
severely stretched out. Darkness had
covered with clouds the Ruler’s body,
the shining brightness. A shadow passed
dark under the heavens. All creation wept,
lamented the king’s fall. Christ was on the cross.
Posted by Clerk of Oxford at 5:49 pm