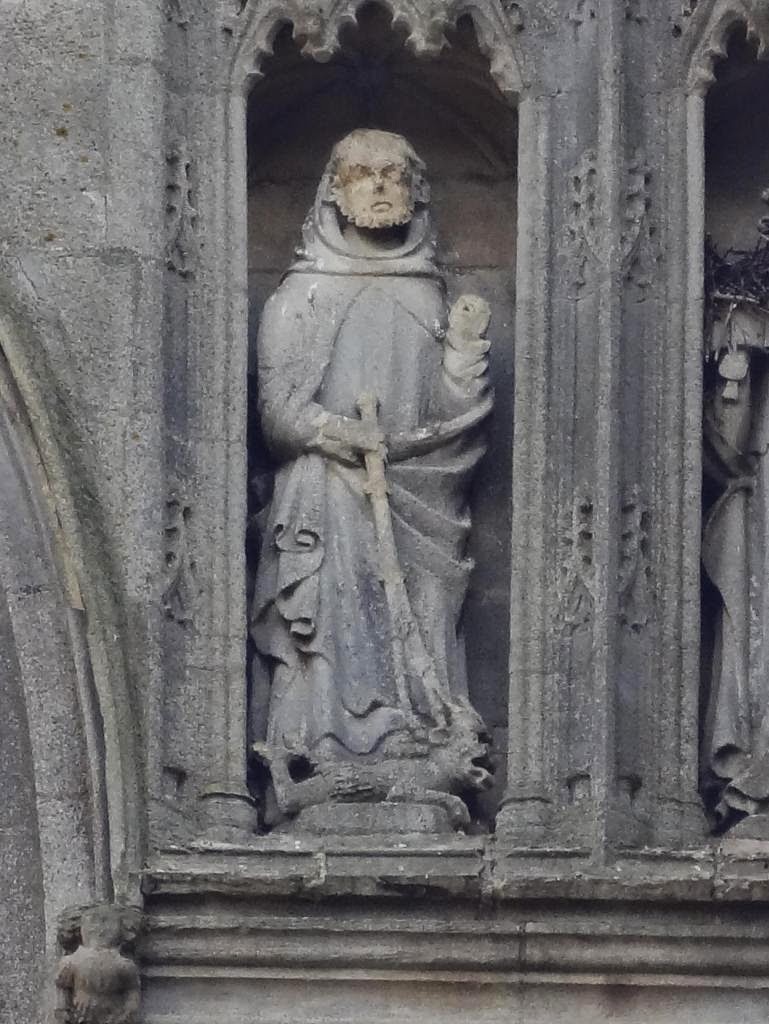 Guthlac at Crowland Abbey, with a devil at his feet

11 April is the anniversary of the death in 714 of St Guthlac, a soldier who took up the life of a hermit at Crowland in the Lincolnshire fens, and subsequently became one of Anglo-Saxon England's most important saints. Guthlac was born into a noble Mercian family and began his life like any other Anglo-Saxon nobleman, as a warrior; his was the Mercia of the newly-discovered Staffordshire Hoard, a kingdom of great wealth and power, and we might imagine Guthlac carrying weapons adorned like this. Inspired by "the valiant deeds of heroes of old", according to his biographer Felix, Guthlac fought in the army of the king of Mercia, and spent his youth as leader of a warband. And then one night, at about the age of twenty-four, he went to bed brooding on his usual concerns:

[W]hen... Guthlac was being storm-tossed amid the gloomy clouds of life's darkness, and amid the whirling waves of the world, he abandoned his weary limbs one night to their accustomed rest; his wandering thoughts were as usual anxiously contemplating mortal affairs in earnest meditation, when suddenly, marvellous to tell, a spiritual flame, as though it had pierced his breast, began to burn in this man's heart. For when, with wakeful mind, he contemplated the wretched deaths and the shameful ends of the ancient kings of his race in the course of the past ages, and also the fleeting riches of this world and the contemptible glory of this temporal life, then in imagination the form of his own death revealed itself to him; and, trembling with anxiety at the inevitable finish of this brief life, he perceived that its course daily moved to that end. He further remembered that he had heard the words: 'Let not your flight be in the winter neither on the sabbath day.' As he thought over these and similar things, suddenly by the prompting of the divine majesty, he vowed that, if he lived until the next day, he himself would become a servant of Christ.

"He contemplated the wretched deaths and the shameful ends of the ancient kings of his race in the course of the past ages, and also the fleeting riches of this world and the contemptible glory of this temporal life" - in other words, he lay in the dark and thought about the chief theme of Anglo-Saxon heroic poetry, which is that earthly glory is splendid and beautiful but is always passing into nothingness. 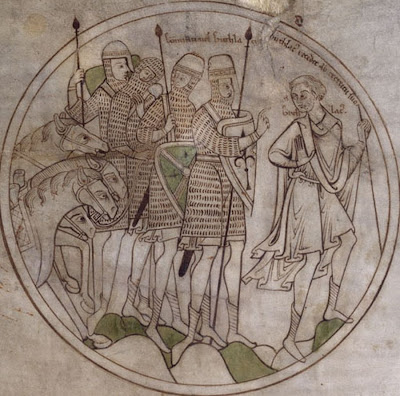 What stories did he reflect on, if Felix's description has any basis in reality? It would be wonderful to know. Perhaps the tales of his ancestors in the tribe of the Guthlacingas, or the kings of the royal line of Mercia - but those stories are all lost to us, and we can only speculate. Whatever it was, the sudden awareness of death brought about a great change in Guthlac: he gave up his military life and became first a monk at Repton and then a hermit at Crowland, exchanging battles with the king's enemies for fierce struggles against demons. His story was vividly brought to life by a later Crowland artist, working probably at the beginning of the thirteenth century, who produced a series of pictures illustrating Guthlac's life on a long roll of parchment (now British Library Harley Roll Y. 6). Above is Guthlac bidding farewell to a soldier's life; then we see him receiving the tonsure at Repton: 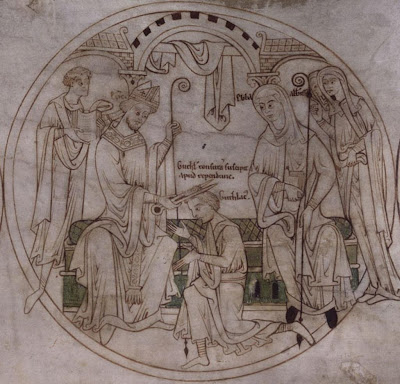 The Crowland artist has fudged the truth here in showing Guthlac receiving the tonsure from a bishop; Repton was a double monastery (i.e. for men and women) under the rule of an abbess, and the Life is clear that Guthlac received the tonsure under Abbess Ælfthryth. I wrote about Repton, still a fantastically evocative place for imagining Guthlac's Mercia, here.

Then we see Guthlac, looking pensive, arriving at Crowland in the wilds of the Lincolnshire fens, on St Bartholomew's Day 699: 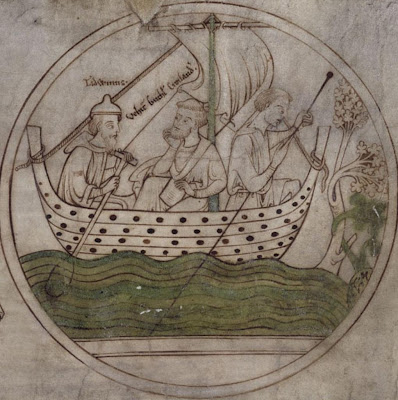 (Compare the same scene rendered in stone at Crowland). Guthlac established a hermitage for himself in an earthen mound, and there he underwent many trials, including being assailed by devils which were vividly imagined by the Crowland artist: 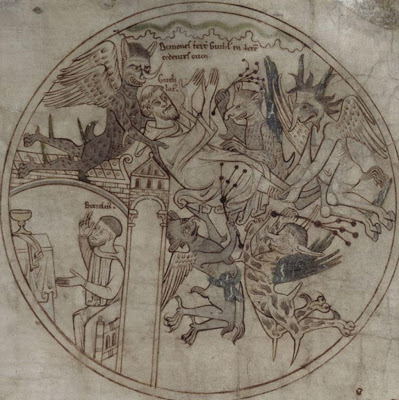 He overcame the devils with the help of St Bartholomew, his patron, and became a miracle-worker and counsellor to kings. You can see illustrations of all this in the Guthlac Roll. 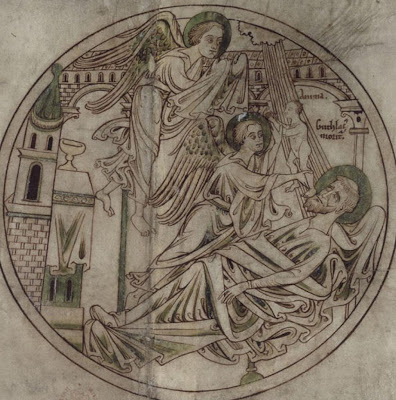 After he died and was buried at Crowland, a monastery was later founded at the site of his hermitage. As well as the Life written by Felix, there are two Old English poems about him, and a post-Conquest account, produced by Orderic Vitalis at the direction of the monks of Crowland, who were ever enthusiastic workers in Guthlac's cause. This is what Crowland Abbey looks like today, a magnificent structure even now it's half in ruins: 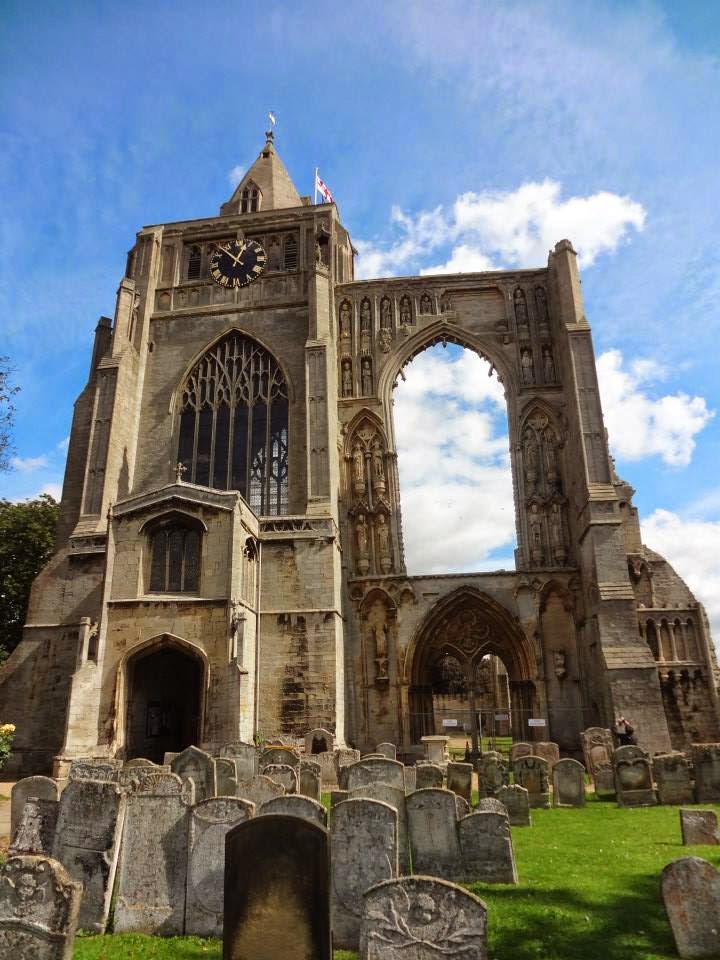 Here, and at a number of other churches named for him in Lincolnshire, Guthlac was long venerated. And thus, in fleeing glory, he won himself fame which has lasted 1300 years.
Posted by Clerk of Oxford at 8:35 pm

Very interesting post! This is only a tangential question which comes to mind, but do you know what the jurisdictional extent of the See of Canterbury was prior to the formation of England? Did it claim and/or receive recognition of primacy in Christian Britain outside of the Kingdom of Kent or was it more of a regional/"national" church restricted to Kent?

Excellent question, but not one which can be answered simply! Pretty much, the answer is yes, from the time of its establishment the See of Canterbury did claim jurisdiction over the church in Britain, and held it consistently south of the Humber from the seventh century - but in Northumbria it was a bit more complicated. In the actual period of the conversion (first half of the 7th century) the influence of Canterbury was closely tied to the sphere of influence of the Kentish kings, so Canterbury didn't have much to do with the spread of Christianity in Northumbria, Mercia or Wessex, and only played a nominal role in the conversion of East Anglia. Then as a system of bishoprics was established the southern dioceses acknowledged the primacy of Canterbury (as the see which had been established with papal approval), and so even when the power of the kingdom of Kent had waned, Canterbury remained the pre-eminent see under the dominant kingdoms of Mercia and then Wessex.

As for northern Britain, Canterbury's primacy over Northumbria and the Celtic church in Britain was effectively established at the Synod of Whitby in 664, and officially at the Council of Hertford in 673. However, an archbishopric of York was created in 735, theoretically to have jurisdiction over Northumbria (as Gregory had originally planned). But in effect Canterbury still claimed some authority over the Northumbrian church pretty much up to the Norman Conquest.

I hope that makes sense! If you're interested in the subject, Nicholas Brooks' 'The Early History of the Church of Canterbury' discusses it in great detail...

Thanks so much for that very informative response; it clarifies a great deal! I look forward to reading the Brooks volume; it looks promising! Am currently reading Blair's "The Church in Anglo-Saxon Society" which is quite good so far.

The poet David Jones speculated that the demons speaking an iunntelligible language St Guthlac thought he heard might have been isolated Britons still living in the Fens -- I wonder if you think that is plausible.