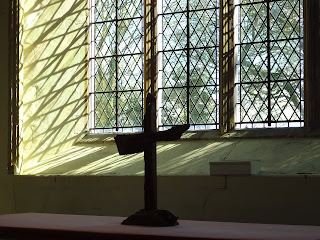 This season, from this present day until the holy Eastertide, is called Christ's Passion-tide, and all God's servants in the holy church with their divine liturgies honour and hold in mind his Passion, through which we were all redeemed. Our books say, too, that we should keep this fortnight with great devotion, because of the approach of the holy Passion and the glorious resurrection of our Saviour. In these days we omit in our responses 'Gloria Patri', in mourning for the holy Passion, except if a great feast-day occurs then.


This is the opening of Ælfric's sermon for the Fifth Sunday in Lent. As he explains, the last two weeks before Easter are traditionally Passiontide, a name he translates into English as ðrowung-tid, 'the time of suffering'. It is a season with its own customs and character of deepening solemnity for genealæcunge þære halgan ðrowunge 'because of the approach of the holy Passion'. Along with practices such as that mentioned by Ælfric of omitting 'Gloria Patri' in the liturgy, the season has its own hymns, most famously 'Vexilla Regis Prodeunt':

For a translation and the history of the hymn, which is by Venantius Fortunatus, see this page. The concluding lines of Ælfric's sermon touch on similar ideas to the hymn, which he would have known:


'Vexilla Regis Prodeunt' is perhaps most familiar today in the translation by J. M. Neale, 'The royal banners forward go', but it was first translated into English centuries before Neale. There's a surviving Old English gloss for this hymn, where the first verse is glossed as follows:

This is not properly a translation, just a word-for-word gloss, but it gives us some interesting vocabulary. The first word, guþfana, 'war-banner', particularly struck me because I associate it with Vikings (specifically, the raven-banner-bearing Vikings in the Anglo-Saxon Chronicle entry for 878), so I found its appearance here a bit startling! The usual English translation 'banners' makes it sound softer - but this is a war-standard, after all, not the kind of banner you carry in a church parade. And I learn from the OED that guþfana is related to the word gonfalon ('flag, banner') which I know only from its use as the name of the tune to which English translations of this hymn are often sung, Gonfalon Royal. That's a nice fact, which ties the earliest English translation of this hymn together with the form in which it's best known to English-speakers, a thousand years later. 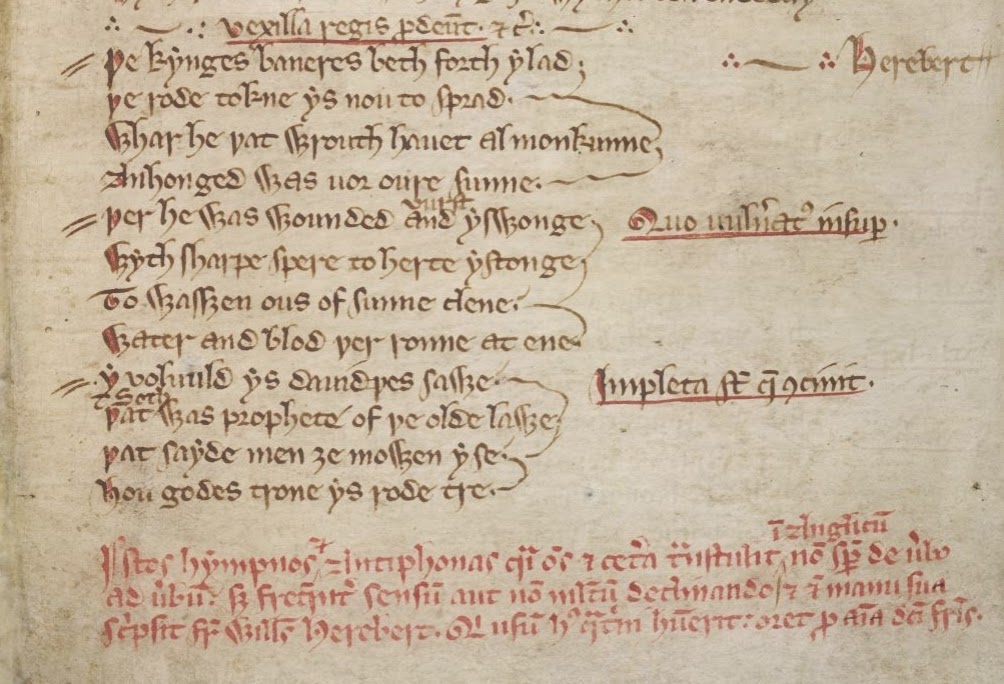 There are several Middle English versions of 'Vexilla Regis Prodeunt', including three separate translations of the first verse alone. My favourite is by William Herebert (d.1333), which you can read in the manuscript image above; Herebert was a prolific translator of Latin texts into English verse, and this is one of the best of all his many translations.

Below is my rather free modernised version. The fifth verse is my favourite, a fabulous image which Herebert carries over from the Latin: it takes the idea of 'ransom' in its literal sense, a price to be paid in exchange for release from captivity, and imagines the arms of the cross as a pair of scales on which it is weighed out.

The king’s banners are forward led;
The symbol of the rood is spread,
Where he, who wrought hath all mankind
For our sin was hanged on high.

There was he wounded and first swung,
With sharp spear to the heart was stung;
To cleanse us from the sins of man,
Water and blood from his side ran.

Fulfilled is now King David’s saw,
Prophet’s true words of the old law,
Who said: “Men, you now may see
That God’s throne is the rood tree.”

O tree, which art so fairly dressed,
And with king’s purple richly blessed!
Of worthy stock chosen thou were,
That such holy limbs didst bear.

Blest be thou, that thou hast borne
The ransom of a world forlorn!
Christ’s balance-scales, on which he weighed
The price he for hell’s prey hath paid.

O cross, my hope, my only trust,
Thee now I praise with all my love.
Speed well the meek in righteousness,
And sinful men with mercy bless.

O God, thou Blessed Trinity,
Let every soul adore thee!
Since thou boughtst them on the rood tree
Grant now their guide to ever be. 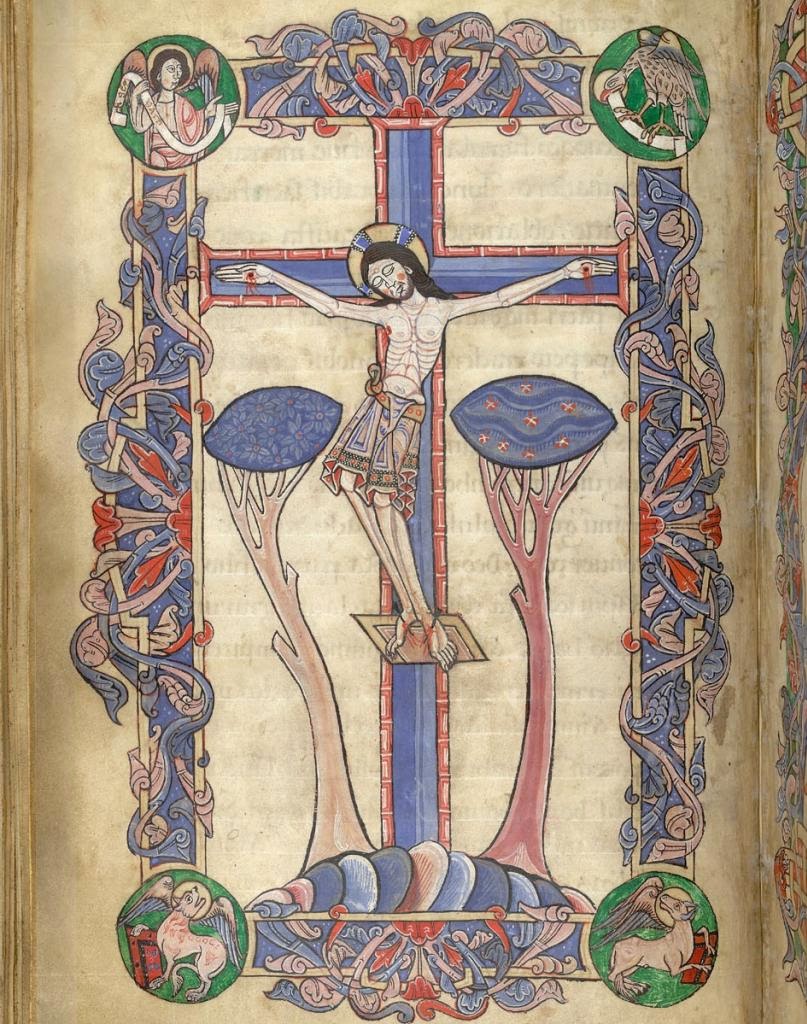 And here are the three translations of the first verse alone. First, from the mid-fourteenth century (a few decades later than William Herebert):

This appears in a manuscript of sermons and other texts collected by John Sheppey, Bishop of Rochester (d. 1360), which is now Merton College MS. 248. You can find this verse on f. 74, where it begins six lines down from the top of the second column (marked out with a squiggle on the right-hand side). 'Crouch' is a common Middle English alternative form of 'cross', a word which came into English from Latin but took various forms; Herebert instead has the form croyz. One medieval name for the Feast of the Invention of the Cross was 'Crouchmas', which is just a wonderful word. (As you can see, the Old English word 'rood' also survived into Middle English; it appears here in the last line, and in two of the versions below).

In another manuscript of sermons (Bodleian MS. Lat. th. d. 1), this time dating to the 1430s, there's another translation of this verse:

Also from the fifteenth century, a freer translation in Cambridge University Library Kk. 4. 24:

And finally, some Lydgate: 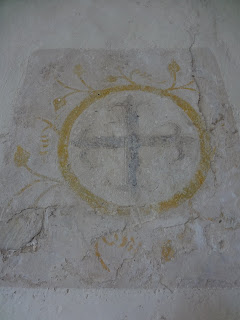 The first and last pictures in this post are two very different versions of the 'rode tokne' from the church of St Andrew's, Westhall, Suffolk (on which more here) - at the top, a modern altar cross made from old timbers, and here a medieval wall-painting of a consecration cross, sprouting tendrils of new growth, as medieval crucifixes are apt to do.
Posted by Clerk of Oxford at 11:53 am