Repost: Magnus the Martyr, The Saint Who Hid In A Tree

I'm reposting this from last year in honour of St Magnus, because I just love this story! 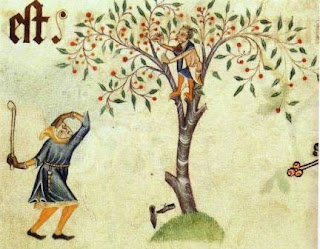 Magnus Erlendsson, who is commemorated on April 16th, is the pre-eminent saint of the Orkneys, and if you would like a proper account of his life I suggest you go here. There are two things I principally remember about Magnus, and one is that he did miraculous favours for English gamblers, and the other is that he hid up a tree. This is the tree story.

At the end of the eleventh century, when Magnus was born as the son of the Earl of Orkney (one of the twin brothers who held that title jointly, in fact), the independence of Orkney was constantly under threat from the kings of Norway. In 1098 the king of Norway (also called Magnus, helpfully - stick with me here) arrived in Orkney and declared himself its new ruler. He deposed the twin earls and took their sons, including Magnus, into his service, and installed his own son as the new earl. He then went on an expedition around the Irish Sea, doing his bit to extend or enforce Norwegian power through the various islands, and taking the Orkney boys with him.

(The son of Harold Godwinson was also with them, in case you ever wondered what happened to him.)

Anyway, the story goes that Magnus Erlendsson, who was already known for his piety and gentle nature, was a bit of a young pacifist. (He was in his early teens at this point). When King Magnus and his men were preparing for a battle off Anglesey against the Welsh and some Norman earls from the Welsh borders, young Magnus refused to take part. This is how Orkneyinga saga tells it:

"When men were getting out their weapons and preparing themselves for the fight, Magnus Erlendsson sat down in the forecastle, and did not arm himself. The king asked why he sat there. He said he had no quarrel with any man there - "That’s why I will not fight." The king said: "Get down below deck, then, and don’t lie here under our feet, if you're afraid to fight - for I don't think it's piety that makes you do this." Magnus took a psalter, and sung while the battle lasted, but did not shield himself. This battle was both hard and long, and spears were thrown and blows struck; it was long so that it could not be seen between them which way the fight would turn."

King Magnus won the battle, but it only got worse for young Magnus...

"King Magnus had made Magnus Erlendsson his page, and he always served at the king’s table; but after the battle in Anglesey King Magnus took a great dislike to him. He said he had behaved like a coward. It happened one night when King Magnus lay off Scotland that Magnus Erlendsson ran away from King Magnus’ ship when he thought he had the best chance of escaping from the king. He jumped overboard and swam to land, and made up his berth so that it seemed as if a man lay there.

[like they do in kids' TV shows! This would make such a great cartoon...]

"But when he came to land he ran into the woods. He was only dressed in his underclothing. He struck his foot, and hurt himself sorely, as he was barefoot, and so he could walk no further. He came to a large tree, and climbed up there into the branches, and there he bound up his foot, and hid himself in the branches for some time. But in the morning when men went to eat on board the king’s ship, the king asked where Magnus Erlendsson was. He was told that he was asleep in his berth. The king bade them wake him, and said something else than sleep must have come over him when he lay in bed longer than other men. But when they went to his place, he was missing. Then the king bade them search for him and let loose the dogs. But when the dogs were loose, they at once got on his track, and ran off to the wood, and came to the tree where Magnus was hiding. Then one hound ran round and round the oak and bayed. Magnus had a stick in his hand, and threw it at the hound, and hit him on the side. The hound laid his tail between his legs and ran down to the ships, and the others after it. The king’s men could not find Magnus. He lay hidden for a while in the wood, and was next heard of in the court of Malcolm the king of Scots, and stayed there a while, but sometimes he was in Bretland with a certain bishop. He was sometimes in England, or in other places with his friends, but he did not come back to the Orkneys while king Magnus lived."

And who could blame him? It didn't go too well when he got back to the Orkneys, either, and that's why he's a martyr; but that's another story.

The picture of the man up a tree is from the Luttrell Psalter. I don't think he's actually *hiding* up the tree, but I couldn't resist...
Posted by Clerk of Oxford at 12:34 pm