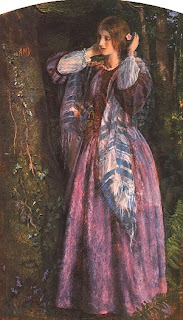 She 's gentle as she 's bonnie, an' she 's modest as she 's fair,
Her virtues, like her beauties a', are varied as they're rare;
While she is light an' merry as the lammie on the lea--
For happiness an' innocence thegither aye maun be!

Whene'er she shews her blooming face, the flowers may cease to blaw,
An' when she opes her hinnied lips, the air is music a';
But when wi' ither's sorrows touch'd, the tear starts to her e'e,
Oh! that 's the gem in beauty's crown, the priceless pearl to me.

Within my soul her form 's enshrined, her heart is a' my ain,
An' richer prize, or purer bliss, nae mortal e'er can gain;
The darkest paths o' life I tread wi' steps o' bounding glee,
Cheer'd onward by the love that lichts my nameless lassie's e'e.


'The Nameless Lassie' is a song by James Ballantine (1806-1877) - who was both a poet and stained-glass artist, what a combination!  Unlike the other Victorian Scottish songs I've posted so far, this one shades a little too far into the sentimental and the didactic for me (my tolerance level for Victorian sentimentalism is sky-high, but this is just a bit much - I think it's the 'lammie' that does it!).  But I do like the last verse, and, in combination with the lovely tune, by Alexander Mackenzie (1819-1857), the effect is really rather charming.
Posted by Clerk of Oxford at 10:20 am