An April Poem: In Praise of Ducks 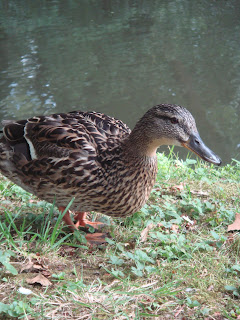 This poem, which is by Geoffrey Dearmer, is not actually called 'In Praise of Ducks'; it's called 'April'. But the whole second verse is devoted to ducks, as those delightful and irresistible creatures deserve. Oxford's rivers are full of ducks, and watching them is never dull.

Ducks are conducive to poetical and philosophical thinking; as Lord Peter Wimsey reflects in Gaudy Night, while punting and feeding ducks upon the Cherwell:

"Twenty-three years ago I fed these identical ducks with these identical sandwiches... and ten and twenty years hence the same ducks and the same undergraduates will share the same ritual feast, and the ducks will bite the undergraduates' fingers as they have just bitten mine. How fleeting are all human passions compared with the massive continuity of ducks."

I can attest to the truth of this from personal experience. 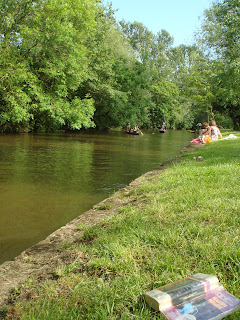 On the banks of the Cherwell
A post with a duck poem would not be complete without a link to the delightful 'Ducks', by the Gloucestershire poet F. W. Harvey. Nor, for that matter, a link to the 'Ducks' Ditty', which I have known all my life, but only just learned was actually composed by Ratty in The Wind in the Willows:

The Rat was sitting on the river bank, singing a little song. He had just composed it himself, so he was very taken up with it, and would not pay proper attention to Mole or anything else. Since early morning he had been swimming in the river, in company with his friends the ducks. And when the ducks stood on their heads suddenly, as ducks will, he would dive down and tickle their necks, just under where their chins would be if ducks had chins, till they were forced to come to the surface again in a hurry, spluttering and angry and shaking their feathers at him, for it is impossible to say quite all you feel when your head is under water. At last they implored him to go away and attend to his own affairs and leave them to mind theirs. So the Rat went away, and sat on the river bank in the sun, and made up a song about them, which he called 'Ducks' Ditty'...

"I don't know that I think so very much of that little song, Rat," observed the Mole cautiously. He was no poet himself and didn't care who knew it; and he had a candid nature.

"Nor don't the ducks neither," replied the Rat cheerfully. "They say, 'Why can't fellows be allowed to do what they like when they like and as they like, instead of other fellows sitting on banks and watching them all the time and making remarks and poetry and things about them? What nonsense it all is!' That's what the ducks say."

Very true. And yet people are so very keen to make poems about ducks; and who would deny them the pleasure? 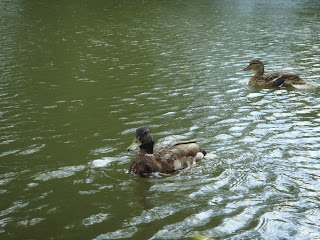 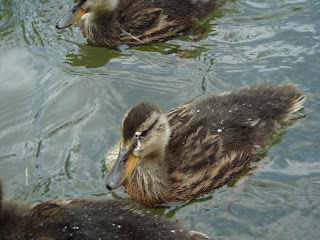 And so here's Geoffrey Dearmer.

Now April has come,
The country grows sweet here,
The chiff-chaff and wheatear,
Behold, from the land of ripe oranges come!
And cherry and plum,
With white blossom gleaming,
The hillsides are seaming.
Too long have been dumb
The woods and the wold
With buttercups blest,
The lark builds her nest
In green and in gold.
There’s cover for all birds,
For large birds and small birds,
Where furled leaved unfold.
She comes like a bride In front of the tide Of emerald mist.No keen weather stays her; No bird disobeys her; No bud can resist.

A touch of her wand -
The buds rise to meet her,
And birds’ eyes all greet her -
Why even the garrulous ducks on the pond
See signs of her wand!
As if the Magician
Sent ducks on a mission
With news from Beyond,
With tidings which they
Through natural art
Feel bound to impart!
But April and May
Themselves are their voices,
And no bird rejoices
Superbly as they.
They come like a bride In front of the tide Of emerald mist.No keen weather stays them; No bird disobeys them; No bud can resist. 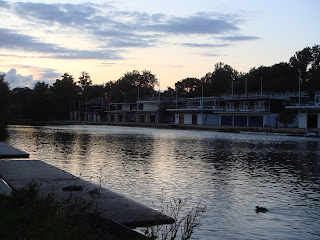 A lone duck swims past the boat houses on the Isis, where Oxford's rowers sport themselves.