There's nothing like the sun as the year dies,
Kind as it can be, this world being made so,
To stones and men and beasts and birds and flies,
To all things that it touches except snow,
Whether on mountain side or street of town.
The south wall warms me: November has begun,
Yet never shone the sun as fair as now
While the sweet last-left damsons from the bough
With spangles of the morning's storm drop down
Because the starling shakes it, whistling what
Once swallows sang. But I have not forgot
That there is nothing, too, like March's sun,
Like April's, or July's, or June's, or May's,
Or January's, or February's, great days:
And August, September, October, and December
Have equal days, all different from November.
No day of any month but I have said -
Or, if I could live long enough, should say -
'There's nothing like the sun that shines today.'
There's nothing like the sun till we are dead. 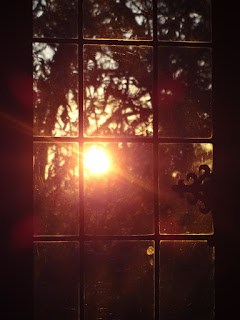 I forgot to post this in November, but it's still good for this time of year.
Posted by Clerk of Oxford at 6:21 pm

Thanks for this. It fits my day very well.

The starlings are eating all the berries from my holly trees at the moment, and I like the idea of them...'whistling what once swallows sang.'

There'a a sort of Volta at the end, which might be amusing but for WW1

Yes, indeed. The poem was written in November 1915, and this link (from a blog I enjoy very much) has some further information about it:

Thank you, a really interesting link.