I recently spent some time in East Anglia, on the border between Suffolk and Norfolk, where there are a large number of beautiful churches. They're naturally very keen on one of my favourite Anglo-Saxons, Edmund of East Anglia, in that part of the world, so I was able to expand my collection of 'medieval people in stained glass windows' (see further: here, here, and here) with lots of St Edmund. They're not all stained glass, actually; there's a bit of stone too.

First, logically enough, the church dedicated to St Edmund in Southwold. We have a variety of things here. Exhibit one, Victorian Edmund, complete with moustache: 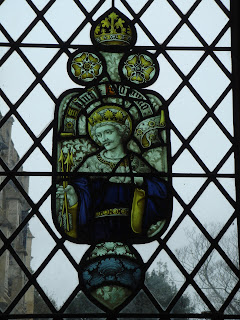 Please note the arrows, which will become a recurring theme.

Exhibit two, a modern statue of Edmund above the porch: 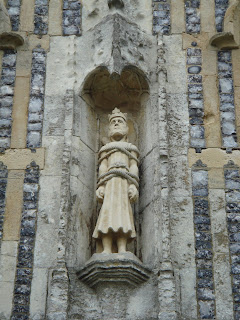 He looks kind of squished and miserable. No wonder he wanted his revenge on Svein. 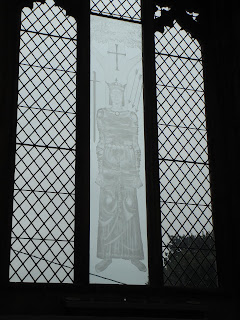 The placement of the sword and arrows in mid-air make it look a bit like a Viking grave.

And exhibit four, the east window, by Sir Ninian Comper: 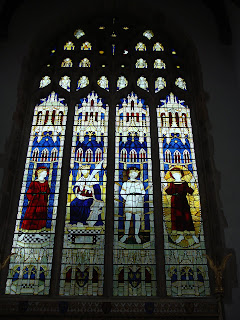 As far as I can tell, the narrative of this window is based on the late medieval legend that Edmund was of German origin, born in Nuremberg, and that his father 'Alcmund' was an Old Saxon king. This almost certainly isn't true; it's based on a misunderstanding of a phrase in the earliest Life of the saint. However, I assume the first two pictures are meant to be Edmund in his father's court, and Alcmund on his throne. Legend said (again, wrongly) that Edmund inherited the kingdom of East Anglia from his 'uncle', Offa of Mercia (despite the 70 years that separated their lives, so, whatever), and travelled from Saxony to England on Offa's death. The text under the throne is from John Lydgate's life of St Edmund, describing this journey, from MS. Harley 2278 (see this page): 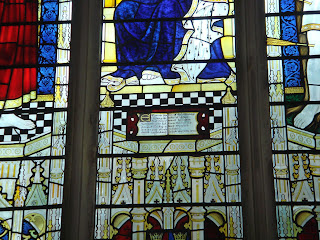 ('The sailors were expert in navigation, knowing the coasts of every sea; Eolus favoured their passage, and God by his grace held his hand over them and conveyed their ship to East Anglia; they soon arrived, to say simply, at a place called Maidenborough.')

And then we'll gloss over what happened next, some Vikings or something, but this was the result: 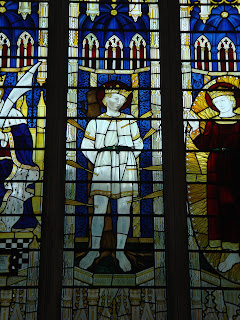 More arrows, you see. The final panel, showing Edmund in the glory of martyrdom, seems to be an illustration of a prophecy about him which was made before his birth to his father by a wise widow of Rome. It's told by Lydgate thus:

Whoever knew there was a church window anywhere in the world which quotes Lydgate? There are few enough books which quote Lydgate, let alone a window! However. That's Southwold. 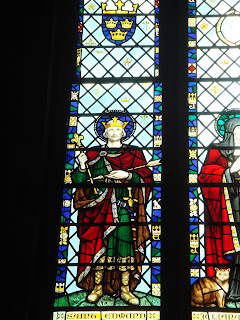 The person next to him, with the cat, is Julian of Norwich, but I'll post her and the other medieval people of Norwich another day. Note the little animal just under Edmund's crest of the three crowns, which presumably represents the wolf who guarded his severed head in the forest.

That's all the windows, but it gets better now - we have some actual Vikings! Here's Edmund at the Roman Catholic church in Bungay, a Victorian building dedicated, in case you couldn't guess, to St Edmund: 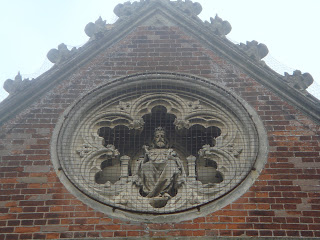 This was a lovely church, inside and out, and when I went there both open and completely deserted (the best state for church-visiting!). So I was able to take lots of pictures of the depiction of the martyrdom of St Edmund, in three scenes, right above the front door: 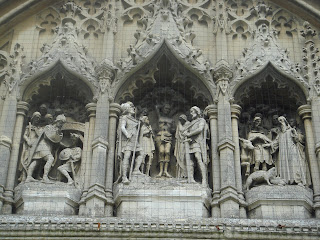 Here we have some aggressive Vikings, and Edmund kneeling: 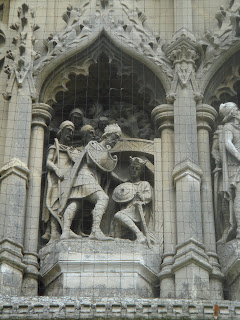 Edmund tied to the tree: 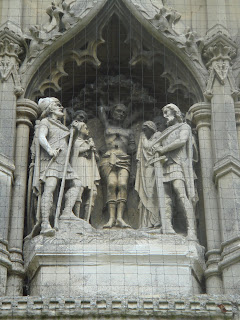 (I love the proud Viking on the left, holding the arrow. That's definitely Ubbe.)

And finally the discovery of Edmund's head, guarded by the wolf: 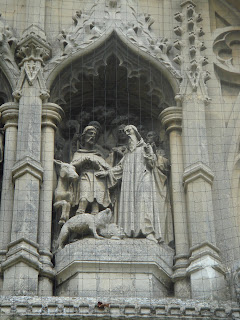 I've saved the best to last - this was my favourite church, little Fritton. It's also dedicated to St Edmund, and has a superb Saxon chancel, off-centre and down a few steps from the rest of the church: 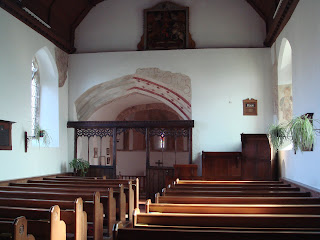 As you can just about see in this picture, the church has some fragments of twelfth-century (!) wall paintings. The one in the curved end of the chancel is of St Edmund: 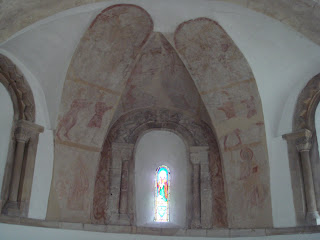 (The modern stained glass is Edmund too, but I couldn't get a good picture of it). I like how the painting seems to use the shape of the rounded wall, giving it a kind of three-dimensional tableau effect. Edmund is in the middle; you can make out a crown and the tree he's presumably tied to, but not much of his body: 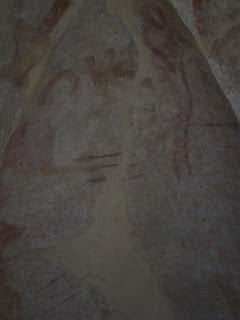 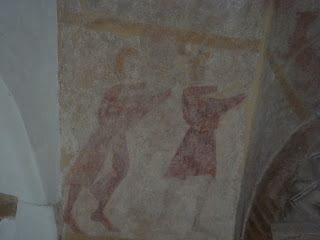 And more Vikings! with bows (and St Peter underneath): 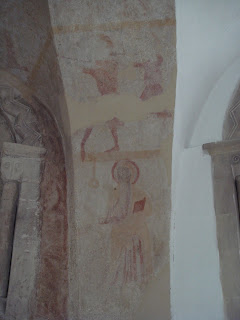 And finally here's the church from the outside. Glorious. 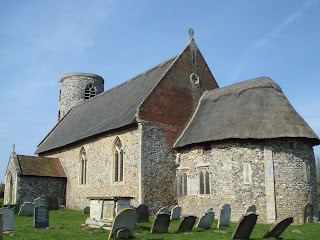 Thanks for your interesting posts on Edmund. They came at the same time as my own, so finding them was peculiarly satisfying, and I included you among my links.

In my case, I was led to Edmund by M. R. James, but sadly I have found very little in the way of solid information regarding the three crowns.