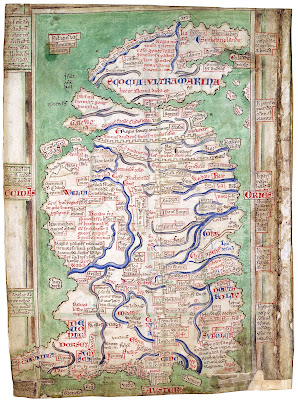 A pen-portrait of England in the late thirteenth century, from the chronicle of Robert of Gloucester.

Engelond his a wel god lond, ich wene ech londe best
Iset in þe on ende of þe worlde, as al in þe west.
þe see goþ hym al aboute, he stonte as an yle.
Here fon heo durre þe lasse doute, but hit be þorw gyle
Of fol of þe selue lond, as me haþ y seye wyle.
From souþ to norþ he ys long eiȝte hondred myle,
And foure hondred myle brod from est to west to wende,
A mydde þo lond as yt be, and noȝt as by þe on ende.
Plente me may in Engelond of alle gode y se,
Bute folc yt for gulte oþer ȝeres þe worse be.
For Engelond ys ful ynow of fruyt and of tren,
Of wodes and of parkes, þat ioye yt ys to sen,
Of foules and of bestes of wylde and tame al so,
Of salt fysch and eche fresch, and fayre ryveres þer to,
Of welles swete and colde ynow, of lesen and of mede,
Of seluer or and of gold, of tyn and of lede,
Of stel, of yrn and of bras, of god corn gret won,
Of whyte and of wolle god, betere ne may be non.
Wateres he haþ eke gode ynow, ac at before alle oþer þre
Out of the lond in to þe see, armes as þei be,
Ware by þe schippes mowe come fro þe se and wende,
And brynge on lond god ynow, a boute in eche-ende,
Seuerne and Temese, Homber yt is þe þridde,
And þenne is as wo seiþ þe pure lond a midde.
Homber bryngeþ by norþ muche god and wyde,
Seuerne by west souþ, Temese by þe est syde,
So þat of god ynow, þat in oþer londes ys,
þer by comeþ to Engelond, þat no defaute nys.

England is a very good land, I think of every land the best,
Set at one end of the world, right in the west.
The sea surrounds it all about, it stands as an isle;
Its foes dare it the less assail, unless it be through guile
Of people from the country, as has been seen somewhile.
From south to north it is long eight hundred mile,
And four hundred mile broad from east to west to wend,
(That is in the middle of the land, and not at one end).
Plenty one in England of every good may see,
Unless for greed or gluttony it may the worse be.
For England is full enough of fruit and of tree,
Of woods and of parks, which joy it is to see,
Of birds and of beasts, wild and tame also,
Of salt fish and also fresh, and fair rivers too,
Of wells sweet and cold indeed, of pasture and of mead,
Of silver ore and of gold, of tin and of lead,
Of steel, of iron and of brass, of good corn a great sum,
Of wheat and of wool good, better there may be none.
Waters it has plenty and good, and above all the others three
Which run into the sea from the land, as it may be,
Whereby the ships may come from the sea and wend,
And bring to land goods enough, about at every end:
Severn and Thames, Humber it is the third,
And that is, as we said, the whole land them amid.
Humber brings from the north goods from far and wide,
Severn by the south-west, Thames by the east side,
So that now all the produce that in other lands is,
Comes in that way to England, where no lack is.

Isles there are many all round England,
But there are above all others three, I understand:
The Isle of Man, as it is called, between us and Ireland,
The great isle of Orkney beyond Scotland,
The third is towards Normandy, the Isle of Wight in the south;
The three best isles these are and the most widely-known.

The first lords and masters that in England were
These chief towns they did in England rear:
London and York, Lincoln and Leicester,
Colchester and Canterbury, Bristol and Worcester,
Chichester and Cambridge, and then Cirencester,
Dorchester and Winchester, and afterwards Gloucester,
And other great towns which then were in Wales,
This was when in England the Britons were, in truth...

In the country round Canterbury most plenty of fish is,
And most hunting around Salisbury of wild beasts, in truth;
At London ships most and wine at Winchester,
At Hereford sheep and cattle and fruit at Worcester,
Soap around Coventry and iron at Gloucester,
Metal, as lead and tin, in the country of Exeter,
York of fairest wood, Lincoln of fairest men,
Cambridge and Huntingdon most plenty of deep fen;
Ely the fairest place, of fairest sight Rochester.

Right opposite France stands the region of Chichester,
Norwich opposite Denmark, Chester opposite Ireland,
Durham opposite Norway, as I understand.

So pure a land is England, so clear without a stain,
The fairest people in the world are born there;
So bright and fair and clear white among other men they are
They are known in every land by sight where they are seen.
Posted by Clerk of Oxford at 8:10 pm