Stories of St Dunstan, 6: The Thief and the Cliff 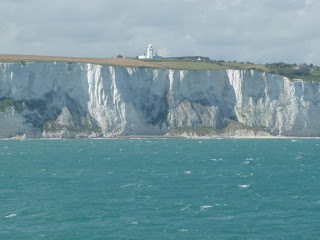 Image from wikipedia
As Archbishop of Canterbury Dunstan acquired a reputation for wisdom, humility and holiness, particularly impressive for someone who was also the leading minister of state. He was much loved at Canterbury, and after his death was by far the cathedral's most popular saint until the day Thomas Becket was murdered before his own altar - Dunstan had no story dramatic enough to compete with that! But for the two centuries before that, Dunstan was their hero. This comes across in the many, many stories his later hagiographers tell about occasions after his death when he intervened to help his monks. I'll save my favourite tale of this kind for tomorrow, but this is also a good one - a miracle which was told to William of Malmesbury in the early twelfth century. Dunstan, he says,

"was able to lighten the woes of his sons by great miracles. One of these I have not seen in writing, though I recently heard it narrated by a monk of Christ Church [probably Eadmer]. A thief, condemned to fall to his death, called on the aid of St Dunstan; his eyes already blindfolded, he was pushed away by his executioners and leapt into the chasm, but without coming to any harm. The blessed Dunstan spoke with him in person there, and removed his bandages. The poor man, heartened by this help, found his way along rough paths to higher ground; an invisible hand on his back supported him as he clung to the cliff-face, and prevented him slipping backwards".

Incidentally, this is "apparently the earliest reference to the customary local mode of execution called ‘infalisation’, according to which felons were thrown from a cliff called Sharpeness at Dover". You know how tall the white cliffs of Dover are? Think of that bit in King Lear:

How fearful
And dizzy 'tis, to cast one's eyes so low!
The crows and choughs that wing the midway air
Show scarce so gross as beetles: half way down
Hangs one that gathers samphire, dreadful trade!
Methinks he seems no bigger than his head:
The fishermen, that walk upon the beach,
Appear like mice; and yond tall anchoring bark,
Diminished to her cock; her cock, a buoy
Almost too small for sight: the murmuring surge,
That on the unnumbered idle pebbles chafes,
Cannot be heard so high. I'll look no more;
Lest my brain turn, and the deficient sight
Topple down headlong.

High cliffs were no match for Dunstan, of course.

And let me assure you, this punishment is no longer customary in the Kentish legal system...
Posted by Clerk of Oxford at 11:22 pm