Thou'rt the music of my soul: Maiden of Morven 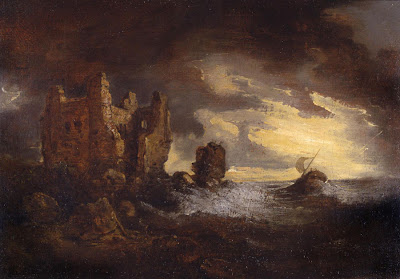 Maiden of Morven: An Ossianic Love-Lament

The lament of an Ossianic hero for the death of his lady-love, accidentally lost in a storm off the point of Ardnamurchan


Moan ye winds that never sleep,
Howl ye spirits of the deep,
Roar ye torrents down the steep,
Roll ye mists on Morven.
May the tempests never rest
Nor the seas with peace be blest
Since they tore thee from my breast,
Maiden of Morven!

Fairer than the flowers that grow,
Purer than the rills that flow,
Gentler than the fallow doe
'Mid the woods of Morven;
As the leaf is to the tree,
As the summer to the bee,
So wert thou, my Love, to me,
Maiden of Morven!

Ossian's harp sings Fingal's praise;
Wild the lilt of Carril's lays,
Men and maids of other days
Fire his tales of Morven.
Though their chords like thunder roll,
When at Beltane brims the bowl,
Thou'rt the music of my soul,
Maiden of Morven!

Oft I chased the deer of yore;
Many a battle-brunt I bore,
When the chiefs of Innistore
Hurled their might on Morven.
Blunt my spear, and slack my bow,
Like an empty ghost I go,
Death the only hope I know,
Maiden of Morven!


This dramatic piece of Victorian Scottish antiquarianism is by Harold Boulton. I don't know much about Ossian and his laments, but you don't really need to in order to enjoy the awesomeness of this song. The tune is an old Highland melody with a super-dramatic setting by Malcolm Lawson, like thunder clouds rolling; you can sort of hear it in this recording at Amazon.

Innistore, according to the note in Songs of the North, is "the Orkney Islands, then like many of the Islands under the dominion of the Scandinavian Kings, who were frequently at war with the Celtic Fingalians of the Mainland". Oh, those Scandinavian kings, always at war with someone. Archaeology helpfully confirms the historical records, since just last year there was a very exciting discovery in Ardnamurchan: a Viking ship-burial complete with the body and artefacts.

Most of my knowledge of this part of Scotland comes from the film 'I Know Where I'm Going', and so this stormy song always makes me think of its climatic scene in Corryvreckan whirlpool (the whole film is on youtube; the whirpool scene starts at about 1:07:00). It's a wonderful film, impossible not to fall in love with; you should definitely watch it if you have an hour or two to spare. The plaintive tune playing as the boat returns is, appropriately, The Boatman, because Powell and Pressburger had excellent taste...
Posted by Clerk of Oxford at 8:54 pm