As a child, Dunstan was educated at Glastonbury Abbey, where his intellectual gifts and devotion to learning quickly became apparent. He excelled as a scribe and artist, and also as a metalworker - he could work in gold, silver, iron or bronze, and would also sculpt in wax, wood and bone. At least one example of his work survives: 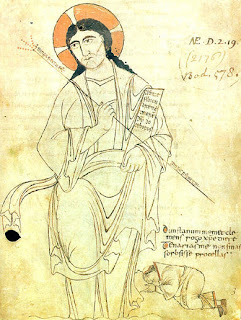 This is from the manuscript known as the Glastonbury Classbook (Oxford, Bodleian Library, Auct. F. 4. 32 (2176)) - it's a portrait of Christ, and the monk kneeling beside him may be a self-portrait of Dunstan. The text beside the monk says Dunstanum memet clemens rogo, Christe, tuere / Tenarias me non sinas sorbsisse procellas ('I ask, merciful Christ, that you protect me, Dunstan; do not permit the Taenarian storms to swallow me').

Along with his other talents, Dunstan was also a skilled musician - he played the harp, and would compose in both English and Latin, moving others (including King Athelstan), to "meditations of celestial harmony". One story tells how when still a young man he was asked by a pious laywoman to come to her house and design a stole for her which she could then copy in golden thread and present to the church (the embroidery of English women was one of Anglo-Saxon England's glories - think of the incredible artistry of the Bayeux Tapestry, and then imagine it threaded with gold!)

Dunstan went to the woman's house, and as he worked on the design, hung his harp next to him on the wall. And all on its own, without anyone touching it, it began to play a familiar antiphon, "The souls of the saints who have followed in the footsteps of Christ rejoice in heaven; and since they have shed their blood for love of him, thus they will rejoice with Christ forever." The people of the household had been watching Dunstan at his work, but now they all turned their attention to the miraculous harp. Eadmer comments that "while the rest were caught up with listening to the simple sound of the strings, Dunstan alone understood what the music foreshadowed and warned of. For he knew by what was being played on the harp that if he wished to rejoice with Christ forever he should not be afraid to shed his blood on his behalf, if compelled by necessity, nor would his soul obtain joy in heaven if he did not follow in Christ's footsteps. He accepted that the performance was truly brought about by the music of angels so that he might be taught as if in the actual presence of God what ought to be done by him in the future."

Dunstan and his harp, the Oxford Oratory

The music of angels accompanied Dunstan throughout his life. Tradition credited him with having composed the 'Kyrie rex splendens' (apparently this one). This is how he learned it:

"The king had gone hunting on Sunday morning, and he asked if Dunstan, who by chance was then with him, would put off saying mass until he returned. And so when the third hour was approaching the man of God proceeded to the church and having put on the sacred vestments he waited for the king, just as he had promised him. He was leaning upon the altar with his elbows and had given himself over to prayer and weeping. Then suddenly a gentle sleep overcame him and he was taken up into heaven; he found himself among the blessed choruses of angels and heard them chanting in praise of the highest Trinity with sonorous voices and saying: ‘Lord have mercy, Christ have mercy, Lord have mercy.’

Having learnt this melody while listening to the heavenly citizens he returned to himself. And he turned to his companions and asked them whether or not the king had arrived. But when they told him that he had not yet arrived, Dunstan returned to his prayers. And after a short time had elapsed he once again was led outside himself and heard a voice on high in the heavens saying, ‘Go, the mass is ended.’ When ‘Thanks be to God’ had been replied to this, the clerics of the king rushed in and announced that the king had arrived and asked the priest to celebrate the mass straightaway. But turning from the altar Dunstan announced that he had said the mass and he refused to celebrate another on the same day.

When he had taken off the sacred vestments he was questioned by his companions about that matter and he revealed to them what was hidden. And so after this the matter was discussed and he forbade the king to go hunting on Sundays in the future. But he taught his companions the ‘Lord have mercy’ which he had learnt in the celestial regions, and today [that is, in the late 11th century] the holy church in many places sings it during the solemn rites of the mass."

This is Dunstan on the Chichele tomb in Canterbury Cathedral: 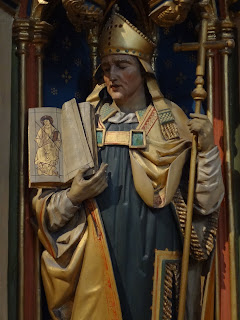 I love that he's holding a depiction of the Glastonbury Classbook.
Posted by Clerk of Oxford at 5:00 pm