The Venerable Bede and the Blink of an Eye 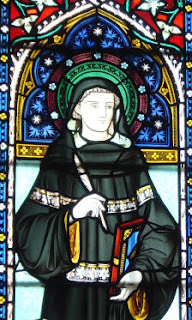 The Venerable Bede, one of medieval Europe's greatest scholars, is commemorated on 25 May. He actually died on the 26th, but as that's the same day as St Augustine of Canterbury (and isn't that a nice coincidence?), he gets his own feast today. Everyone loves Bede and the internet is full of information about him, so I don't have much to contribute; but there's one story of his which never gets tired, however many times you read it.

When King Edwin of Northumbria was considering converting to Christianity in 627, he took council with his men, and one of them told him:

"O king, it seems to me that this present life of man on earth, in comparison to that time which is unknown to us, is as if you were sitting at table in the winter with your ealdormen and thegns, and a fire was kindled and the hall warmed, while it rained and snowed and stormed outside. A sparrow came in, and swiftly flew through the hall; it came in at one door, and went out at the other. Now during the time when he is inside, he is not touched by the winter's storms; but that is the twinkling of an eye and the briefest of moments, and at once he comes again from winter into winter. In such a way the life of man appears for a brief moment; what comes before, and what will follow after, we do not know. Therefore if this doctrine [Christianity] offers anything more certain or more fitting, it is right that we follow it."


This is from the Old English translation of Bede's Historia ecclesiastica, made in the ninth century; you can read a modern English translation of the Latin original here (II:13). We don't know the name of this counsellor of Edwin, if indeed he ever existed and this is not merely Bede adapting a common homiletic idea which seemed appropriate for the situation. But whether it was Bede or the anonymous ealdorman, he gave voice to an idea which is thoroughly typical of Anglo-Saxon poetry, both Christian and secular - and to a description of the human condition which is no less moving today. 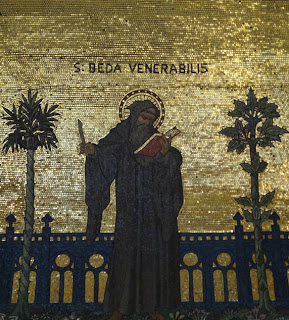 Bede depicted on the ceiling of Westminster Cathedral
Posted by Clerk of Oxford at 12:50 pm