Seven days from today is the feast of St Dunstan (d.988), perhaps the greatest Anglo-Saxon Archbishop of Canterbury. At the beginning of the year I did one of those online 'get a patron saint for the year' random generators (this one) and got St Dunstan, which I thought was pretty lucky, considering there's so many hundreds of saints to choose from and only about five sainted medieval Archbishops of Canterbury (pretty much my favourite category of saint). So in preparation for his feast-day I'm going to post a number of stories about St Dunstan which I've run across in the course of my ever-growing obsession with tenth and eleventh-century Canterbury. 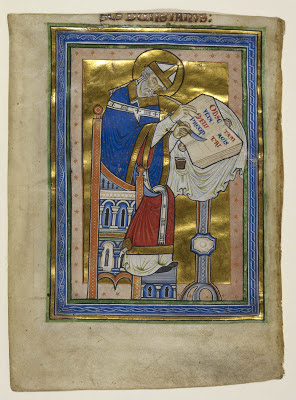 1: Dunstan's birth and the Candlemas Miracle

The first biography of Dunstan was written within ten years of his death by someone known only as 'B'; about a century later, two accounts of Dunstan's life were written by the Canterbury monks Osbern and Eadmer. Eadmer begins his Life of Dunstan by describing how Dunstan "came forth into this spacious world all the more nobly because while he was still closely constrained within his mother’s womb it was indicated by a heavenly miracle that through him a brilliant light would arise in the world." This is how:

Dunstan was born around the year 910 (or a little earlier), to parents living near Glastonbury in Somerset. While his mother Cynethrith was pregnant with him, she and his father, Heorstan, went to church to celebrate Candlemas, the Feast of the Purification. As I’ve mentioned before, we have some interesting evidence about how the Anglo-Saxons celebrated Candlemas, and this story seems to confirm it. They were in the church at Glastonbury (which Eadmer notes was made of wood, unusually for Saxon churches) and had taken with them the candles which were to be lit as part of the liturgy for the day.

And now the office of the mass began to be celebrated and the huge crowd which was brilliantly lit up by a great number of candles was intent on praising the Lord in the house of God. Then suddenly all at once, though the sky remained serene, to the amazement of everyone all the candles went out. They all looked at each other and they were struck with great fear because of this unprecedented and strange event. But while they stood there thunderstruck, knowing not what to think for certain about such an event, with their faces turned upwards they beheld a tongue of fire descending from heaven and lighting the candle which Dunstan’s mother held in her hand. So those who earlier had been greatly stunned by their candles going out were now overwhelmed by greater amazement both by the flame shooting from the sky and by the lighting of the candle of the pregnant woman. And then one by one they approached the fire sent down from heaven and from it they regained the light that had been lost.


A particularly excellent miracle! Shortly afterwards, Cynethrith gave birth to a son and he was named Dunstan, which Eadmer interprets in Latin as 'montanus lapis' - Old English dun 'hill, mountain' and stan 'stone'.  (Other etymologies are available...)

Quotations from Eadmer of Canterbury, Lives and Miracles of Saints Oda, Dunstan and Oswald, ed. and trans. Andrew J. Turner and Bernard J. Muir (Oxford, 2006), pp.51,3.
Posted by Clerk of Oxford at 10:30 am

Did you write 6 other stories of Saint Dunstan? I only see the one pertaining to Candlemas.