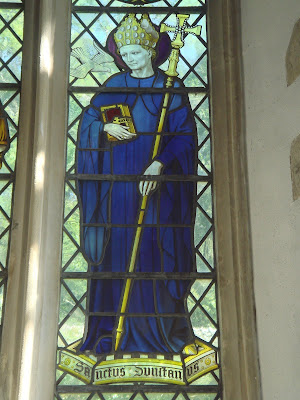 Dunstan's many talents and his popularity, especially the fact that he was in favour with King Æthelstan, provoked jealousy among people around him. "Those who earlier had claimed to love him so strongly and appeared to maintain constant friendship with him in all matters now began to envy Dunstan's advancement"; they claimed that his gentle behaviour was hypocrisy and that his skills were evidence that he was practising black magic. Citing the miracle of the harp which I posted yesterday, they claimed that such a thing could never have happened unless Dunstan had put a spell on the harp.

"That most nefarious rumour grew and day by day its nature worsened. It filtered through the courtiers and came eventually to the ears of the king. And so the king and many of the leading men who had held Dunstan to be of great worth just a little earlier turned their faces from him as from one whom they now despised. When Dunstan noticed this, fearing that things might get much worse, he gave way to the anger of those wicked men and departed from the royal court...  When the perpetrators of the aforementioned evil perceived this, they noted his route and seizing him and his companions they threw him from his horse and inflicted many injuries upon him; they severely whipped and shackled him and they cast him headlong into horrible filth and left him. So that he not be utterly brought to ruin by them, however, through the grace of God which preserved him for his own people afterwards, a huge pack of dogs confronted them, rushing out of nowhere towards them with terrifying barking, and defended the youth. Seeing this, Dunstan felt sorry on account of the error of those wicked men, and blushed, lamenting that dogs had become more humane than them.

Notwithstanding this, giving thanks to God from the bottom of his heart for his ineffable grace, he perceived by his own reckoning that there had been great significance for him in the song of the harp ["The souls of the saints who have followed in the footsteps of Christ rejoice in heaven and since they have shed their blood for love of him, thus they will rejoice with Christ forever" - in other words, this worldly disgrace is a kind of martyrdom]. Meanwhile, when they heard the barking of the dogs mentioned earlier, those living thereabouts were terrified and eagerly ran up to find out what had happened. And discovering what had transpired, they despised those worthless men who had by then dispersed in flight, and lifting Dunstan from the filth they took him back to their homes to care for him."

I wonder how this extraordinary story should be interpreted - the black magic accusation, particularly.  Is it just evidence for factional rivalries at Æthelstan's court, or for Dunstan's own 'self-righteous piety' (as his DNB entry interprets it, rather harshly, I think!)? Does it point to a mood of anti-intellectualism in early tenth-century England, before the Benedictine Revival made learning like Dunstan's a more valuable commodity?  And to give more rein to the imagination, it's interesting to read this in the context of the multiple stories about Dunstan contending with the devil - in itself a common saintly attribute, of course - and to wonder why a saint closely associated with craftsmanship should also be linked to stories about black magic and devil-fighting.  Smiths held a special but somewhat ambivalent place in Anglo-Saxon society and literature (as in many cultures around the world); their work was essential both for the necessities of everyday life and for the splendid trappings of aristocratic culture, but the smith is usually perceived as a marginal, even a dangerous figure - the legendary Weland, forger of Beowulf's mailshirt and many a famous sword, is hero, victim and villain all in one, in a compelling and horrifying story which is mentioned numerous times in Anglo-Saxon literature. So it's not too fanciful to think that a young man like Dunstan, by exploring an interest in metal-working and other crafts, might seem to an Anglo-Saxon audience to be literally playing with fire.  In perhaps the most famous story about Dunstan, the devil came to tempt him while he was at his forge, and Dunstan nipped the devil by the nose with his red-hot tongs.  In later sources this is a comical story, and it probably always was meant to be funny - but the idea that the devil is drawn to the fires of Dunstan's forge, and Dunstan defeats him with the tools of his trade, suggests something more serious lies behind it. Is Dunstan the anti-Weland? 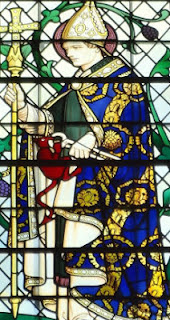 Dunstan (and the devil) at Worcester Cathedral
Posted by Clerk of Oxford at 4:48 pm