Stories of St Dunstan, 7: The Boys of Canterbury and St Dunstan's Ghost 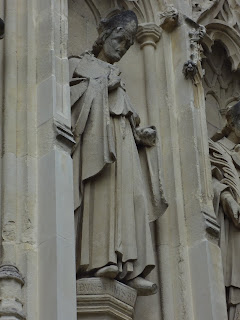 Here's a final story from the Miracles of St Dunstan, which supposedly took place at Canterbury in the tumultuous year which followed the Battle of Hastings, some eighty years after Dunstan's death. It concerns the boys of the cathedral school, and is recorded by two of Dunstan's hagiographers who were at this time themselves boys being educated at the monastery. This is Eadmer's version of the story, following on from an account of how Dunstan posthumously healed a little boy from paralysis:

It pleases me to add to this pious deed performed on behalf of a little boy another act of love of this most loving father carried out for the boys of the church.

The feast day of the birth of Christ was approaching [in the year 1067]. It was an ancient custom in that same monastery on the fifth day before this feast that the boys… within the schools be beaten with severe and excessive lashes. This punishment of the wretched boys was inflicted not for any sins committed but out of custom, and for that reason they were in no way able to escape it, except when the strenuous intercession of advocates might reduce the viciousness of the schoolmasters.

And so on a certain occasion the teachers were of one mind and inflamed with such great wrath against the boys that no prayer by their advocates, no intercession poured forth by anyone on their behalf could at all succeed in calming the madness which had seized them. The wretched boys knew not what to do nor where to turn. Only one refuge remained, to invoke the love of loving Dunstan.

Already on the night before this unspeakably cruel event the boys were trembling with fear when behold, the loving father, appearing to one of the boys in a dream, asked in a gentle manner why he and his companions were afflicted with such grief. And he, unaware of who it was that spoke to him, broke out in tears and explained how the rage of the teachers had conspired against them without a thought for mercy.

But he replied, ‘Have no fear; for I am your father Dunstan whom you have asked for help. I have considered the boundless and unholy wrath of your teachers and I have seen your great need. Do not be afraid, for I will be present with you and you shall suffer no harm. So let your liberation today serve as a signal for you to speak on my behalf to the custodians of the church so that they remove the stinking corpse of the son of Harold, which out of adulation – something I abhor – certain men have buried next to me. Moreover, I am all the more troubled by this because I know that the soul of this boy is damned because it has not been reborn [i.e. baptised]. So if the body is not removed immediately, let them know that before too long the whole church will suffer a grave loss on this account.’

Hearing these things the boy awoke and turning over what he had heard in his mind he vacillated between hope and fear. And now, dawn, that is, the dreaded hour, had arrived; armed with bull-hide whips and knotted lashes the teachers stood waiting in opportune places for the boys to pass by there. But suddenly all at once a most deep sleep enveloped those malevolent men, so that none of them was able to stop the boys passing through their midst, nor to inflict injury upon anyone.

It was not the viciousness which they bore against the innocent children that roused the teachers from their slumber, but the singing and rejoicing of these innocents, and the high feast itself. They were confused, and regretted too late that by falling asleep they had lost the chance to indulge their savagery, from which they had allowed the boys to escape without anyone interceding on their behalf.

But the boy to whom the holy father had appeared, knowing for certain that it was blessed Dunstan whom he had seen, related to the custodians of the church what he had been told about removing the stinking cadaver. Those men considered the words of the youth to be of little consequence, and likewise spurned the warnings and threats of the blessed bishop. Wherefore afterwards that same father was sometimes seen leaving that place by certain pious monks of the church. Whenever he was stopped by them and asked why he was leaving he would reply that he was no longer able to tolerate the stench of pagan flesh in that place, nor the iniquities of certain evil men. And he said, ‘But if these things are not rectified swiftly, mark my words I predict that that the entire city as well as the church will very soon pay a well-deserved penalty for that.’

What in fact happened afterwards proved this premonition to be true. For only a few days after these things had happened the city, together with the whole church and the workplaces of the servants of God, was consumed by fire. Nevertheless it transpired through the great mercy of God and the intercession of holy Dunstan that two buildings, without which the brothers could not have existed, remained unscathed by the conflagration, namely the refectory and the dormitory with the cloisters which adjoined it.

The fire which Dunstan's ghost predicted, as it left its grave and walked to and fro, took place on 6 December 1067, and destroyed the Anglo-Saxon cathedral - a catastrophe for Christ Church, following close on the heels of the Norman Conquest, with which this miracle-story is obliquely linked. Not everything in this tale quite makes sense (the dating is a bit off), but it's an intriguing glimpse into community politics at a very tense time for England and Canterbury. It seems likely that the Harold whose son's presence caused Dunstan's spirit such distress was Harold Godwineson (Osbern in his version of the story talks about 'Earl Harold'). If so, this unbaptised child, who presumably died in infancy, must have been the son of Harold and his long-time consort Eadgyth. As earl or king, Harold might well have had the power to have his child buried near St Dunstan's tomb, but he was, of course, a controversial figure in 1066-7 - no surprise if some of the monks objected to his son being buried at Canterbury! Was it disapproval of Harold, or of his irregular relationship with Eadgyth, which made the burial so controversial? Or was someone worried that it was dangerous for Christ Church to appear too loyal to the dead king? Either way, the tension had apparently filtered down to the boys, and found expression in this tug-of-war over Dunstan's wishes and the masters' cruelty. It suggests something about the way the potency of a great name can linger on within a community; none of the boys in this story were old enough to remember Dunstan, but they knew that invoking his name would win their case for them.

Similar miracles involving protecting children from a cruel beating are attributed to other saints, including St Eormenhild, and here it perhaps reflects Eadmer's adoption of St Anselm's well-known opposition to corporal punishment for the young. However, I like Nicholas Brooks' comment on this story, from his The Early History of the Church of Canterbury: "Some will also see in the story evidence of a brutal and unimaginative discipline; others evidence that even in the eleventh century middle-aged and elderly Englishmen liked to recall the corporal punishment that had characterized the educational system of their youth". (There was no corporal punishment in my youth, but I've certainly heard old men at high table in Oxford reminiscence fondly about what they endured at public school - bizarre as it sounds to people like me!) More than nostalgia, however, this is a complex and extraordinary story - slightly unpleasant in some ways, but an incredibly vivid insight into the life of a monastic community under great strain. 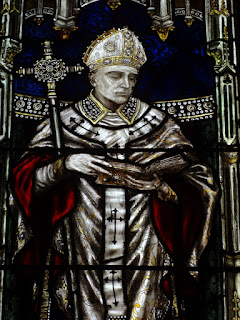 Dunstan, from St Dunstan's church, Canterbury
Posted by Clerk of Oxford at 8:54 pm